UN troops from Nigeria stand in formation in Monrovia, Liberia as 200 Nigerian peacekeepers, the last military protection force in UNMIL, leave the country as part of the termination of the mission's mandate, which is scheduled for March 30, 2018. (UN Photo/Albert González Farran)

Recent trends in United Nations peace operations have seen them deployed to high-risk environments where there is little or no peace to keep. This has led some to question whether serving in UN peace operations has become more hazardous. While current fatality ratios—i.e., annual deaths per 1,000 deployed—are largely in keeping with historical patterns, the number of deaths attributable to malicious acts has been on the rise for the past five years. This reached a 20-year high in 2017, including the 15 Tanzanian troops recently killed by militants in the Democratic Republic of the Congo (DRC)—the most lethal single attack on peacekeepers since 1993. 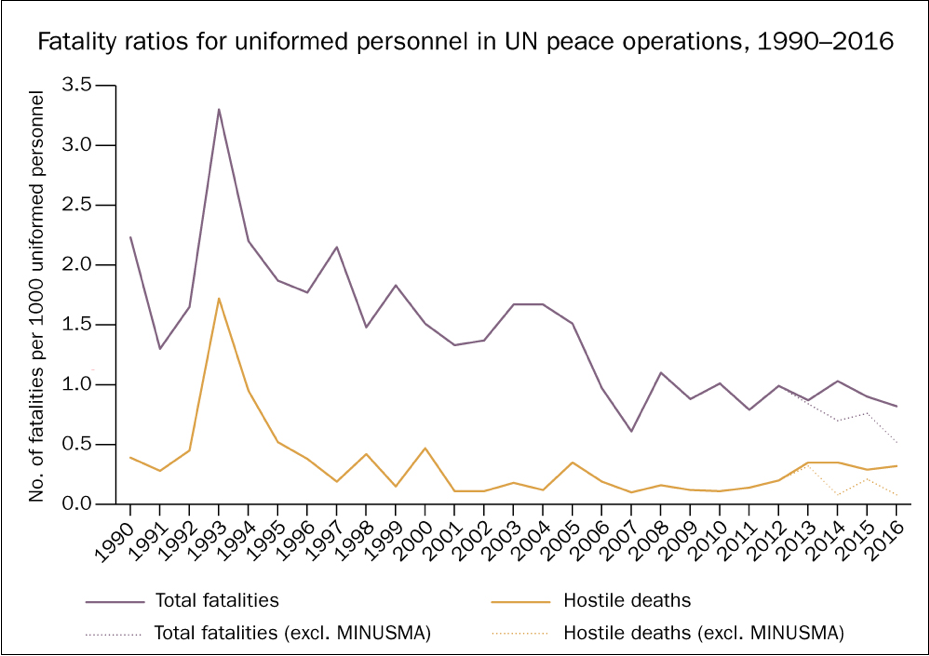 In response to this worrying trend, in November last year UN Secretary-General António Guterres appointed Lieutenant General Carlos Alberto dos Santos Cruz—former Force Commander of the UN Stabilization Missions in the DRC and Haiti—to lead an in-depth review aimed at establishing the reasons for the uptick in peacekeeper casualties resulting from malicious acts, and to propose recommendations on what can be done about it.

The Report and its Recommendations

Publicly released on January 22, the Cruz report—Improving Security of United Nations Peacekeepers—has been described as “unusually blunt,” referring to tone and content uncharacteristic for internal UN reporting. It attributes failures to adapt to new mission environments to a “deficit of leadership” at all levels and blames a defensive “bunker-ized” approach for failures to prevent more lethal attacks.

Perhaps the major cross-cutting recommendation is that peacekeepers should “use overwhelming force and be proactive and preemptive” in order to “deter and repel attacks and to defeat attackers.”

The use of force in self-defence is a foundational principle of UN peacekeeping and, despite suggestions to the contrary, there is nothing in this report that would change the circumstances in which peacekeepers can legitimately and legally use force to defend themselves and the mission as a whole.

The report adds welcome weight to pleas for the equipment necessary for peacekeepers to defend themselves and to reconsider national caveats on how and where particular contingents can be employed. However, while refreshing to those frustrated by perennially unambitious UN navel-gazing, there are reasons to be circumspect about the report’s asperity.

First, bellicose demands for better prepared and performing peacekeepers are likely to annoy those countries whose nationals are disproportionately in the line of fire. Moreover, rehearsing recurrent criticisms of member states is unlikely to have much effect, but does risk aggravating already strained relations between major Troop and Police Contributing Countries (T/PCCs) in the Special Committee on Peacekeeping Operations (C34), the Security Council, and the UN’s peace operations bureaucracy.

Second, any use of force by peacekeepers brings inevitable side effects and can include negative unintended consequences. For example, “collateral damage” resulting from proactive military action is dynamite for the UN’s credibility regarding its protection and human rights agendas—particularly given the organization’s failure to hold its personnel accountable for errant action in the past. There are also indirect risks. For instance, civilian populations often bear the brunt of retaliation by those who are negatively impacted by a more offensive posture. These are important considerations as, after all, peacekeepers will be judged on how well they protect civilians, not themselves.

Third, the application of coercive measures by the UN against some but not all parties to a conflict leads to perceptions of partiality. In extreme cases this can jeopardize the legal protections afforded to peacekeepers, making UN personnel more, not less, of a target. Though  impartiality is a complex and evolving principle in modern peace operations, as anyone who has studied the UN knows, it remains peacekeepers’ strongest shield.

Fourth, the findings do not mention the need for approaches that prioritize engagement with local populations. This ignores the reality that those who attack peacekeepers are often embedded in local communities. Where UN missions conduct joint operations with governments who are active parties to the conflict, affected populations grow to resent the UN, increasing the likelihood that they will acquiesce in the presence of those who would do peacekeepers harm. More people-centered approaches that generate local consent are vital to enhancing both the effectiveness and safety of missions.

The (F)utility of Force Without the “Primacy of Politics”

The report’s recommendations have already been drawn up into an “Action Plan“ to address urgent inadequacies and systemic gaps at headquarters and in the field. By highlighting issues primarily of a technical nature at the operational level, Cruz and his team have identified part of the problem, and implementing their recommendations tailored to address these could bring dividends. However, efforts to implement this plan must remain cautious lest more robustness is seen as a silver bullet for securing UN peacekeepers.

In never really discussing what is actually causing the increased threat to peacekeepers, the Cruz report limits itself to addressing just one element of the bigger question of what is putting peacekeepers at greater risk. It follows that it also offers only a partial account of what needs to be done about it. As former UN peacekeeping chief, Jean-Marie Guéhenno, has argued, more force is futile in the absence of a viable political strategy that can produce a sustainable peace. These recommendations must therefore be understood and interpreted with the broader politics of peacekeeping in mind. Otherwise, well-intentioned efforts to enhance the security of peacekeepers could perversely end up further imperiling them.