MONUSCO peacekeepers watching over Bunagana and Ruyoni hill in the Democratic Republic of the Congo. (UN Photo/Sylvain Liechti)

United Nations peacekeeping has been in dire need of reform and overhaul, both conceptually and in practice. In this respect, the dos Santos Cruz report is a welcome contribution to supporting reform, strengthening self-protection, and improving the effectiveness of UN peacekeeping. In recent years, many steps have been taken in the right direction. These include updating the conceptual framework of UN peacekeeping operations, e.g., to enable intelligence-led operations and equip operations with better capabilities such as surveillance drones and an incident and event database, allowing for quantitative analysis of patterns in violence. The dos Santos Cruz report continues this work, with a heavy emphasis on the military component and the need for troop contributing countries to be ready to take robust action, to not have caveats, and to train and equip troops to enable a proactive posture.

However, member states and the UN Secretariat alike should be careful that the right tools are not provided to UN peacekeeping for the wrong reasons. In several of the recommendations made in the report there is explicitly and implicitly a link between the inclusion of modern military capabilities and the need for a more robust and military-centric interpretation of peacekeeping, increasingly leaning towards peace enforcement and counterterrorism.

This development is being reinforced by three main trends. First, many of the recently added tools and the conceptual development has been provided by Western nations with long experience in counter-insurgency and counterterrorism in Afghanistan and Iraq. Second, there is emerging consensus among the permanent member states of the UN Security Council that UN peacekeeping needs to deal with violent extremism and terrorism in order to remain relevant to the challenges of today. Third, there has been a dramatic increase in the contribution of troops by regional and neighboring states to peacekeeping operations with a strong self-interest in the outcome of the conflicts they engage in, moving UN peacekeeping away from the traditional principles of impartiality, consent of the main parties, and the non-use of force except in self-defense or to protect civilians. For all of these member states and their troops on the ground, it will at best take considerable time to adapt to the UN where the emphasis should be on giving support to lasting, inclusive, and sustainable political solutions, where operations are civilian-led and the military is not the center of gravity.

The focus of the dos Santos Cruz report is on fatalities in UN peacekeeping operations and how these can be reduced. It argues that fatalities have risen dramatically and have steadied at a high plateau, requiring increased willingness and ability to use force. The increase in fatalities has to a large degree been driven by the very difficult situation for the United Nations Multidimensional Integrated Stabilization Mission in Mali (MINUSMA), from its inception in 2013 until today. When this mission is deducted from the overall fatalities, it is not a plateau that appears, but rather a downward trend until a spike in 2017 (green curve). 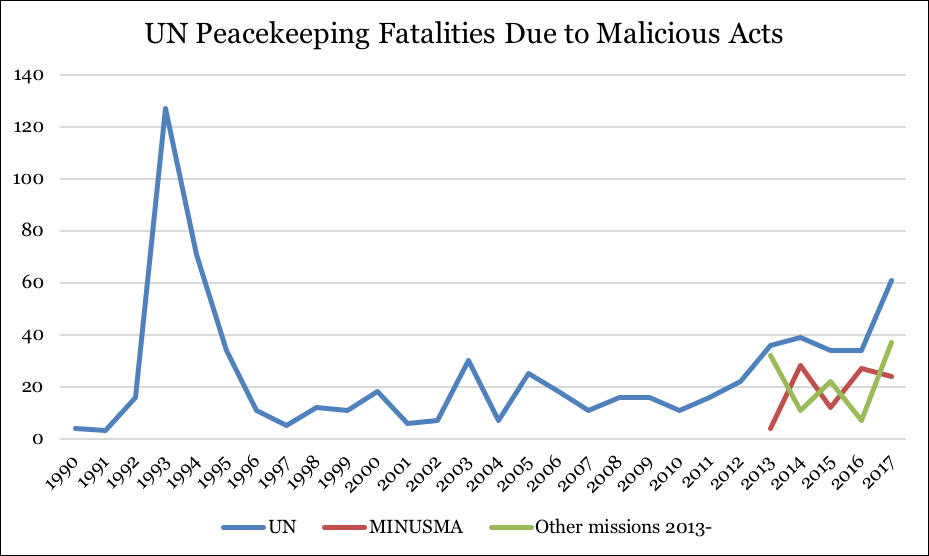 While this development is very worrisome and deserves careful scrutiny to enable peacekeepers to better protect civilian populations and themselves, it is also necessary to undertake a more careful examination of MINUSMA in particular. MINUSMA is the first peacekeeping operation deployed in parallel with an ongoing counterterrorism operation, so there are many good reasons to consider the mission as an outlier in the history of UN peacekeeping. In a view shared by many member states, Hervé Ladsous, former Under-Secretary-General for UN peacekeeping operations, has consistently argued that MINUSMA is a “laboratory for UN peacekeeping” facing the “new threats of the 21st century.”

In MINUSMA, it is the troops from African countries that have suffered the brunt of attacks. Of 155 fatalities from the inception of the mission in 2014 to December 31, 2017, 85% (131) were African troops. 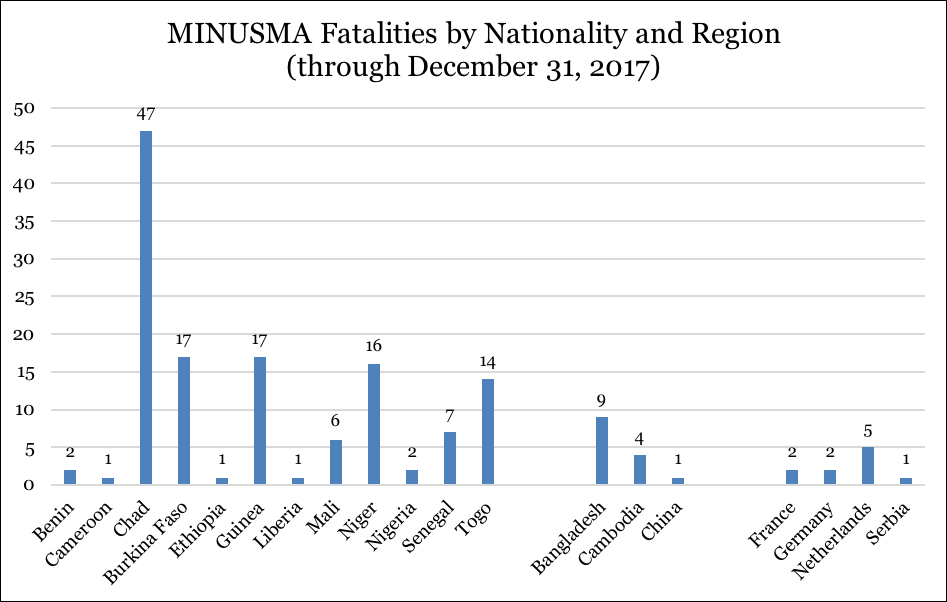 Moving Towards “Chapter Seven and a Half” Operations?

Why do African peacekeepers dominate the fatality statistics of MINUSMA? There are several reasons for the disproportionate numbers, most importantly being that African troops have been deployed to more risky areas and taken on more offensive military tasks, often without the necessary training and equipment for self-protection.

MINUSMA was mandated to replace the African-led International Support Mission in Mali (AFISMA), which was composed of troops from the region and Chad. AFISMA had a mandate to “take all necessary measures […] [t]o support the Malian authorities in recovering the areas in the north of its territory under the control of terrorist, extremist and armed groups.” When AFISMA was replaced in 2013, the African troops were re-hatted and included in MINUSMA, and as of December 31, 2017, 67% of the uniformed contributions were West African, including troops from Chad.

Mali and the African Union pushed hard for an explicit peace enforcement mandate for MINUSMA, and although this proposal was ultimately rejected, it showed the willingness of African states to engage in peace enforcement and counterterrorism. Mali and the AU have since continued to push for the establishment of a regional “rapid intervention force capable of effectively combating terrorists” to be: 1) included in MINUSMA, modeled on the Force Intervention Brigade in the UN Stabilization Mission in the Democratic Republic of the Congo (MONUSCO); 2) deployed as a separate force, but with logistical support from the UN; or 3) deployed as a parallel force but with a Security Council resolution or presidential statement “supporting the establishment and deployment of the force, so as to facilitate the mobilization of international support.” Thus, in spite of the mantra of African solutions to African problems, the AU and sub-regional organizations continue to be dependent on logistical and financial support to implement operations, and these are most easily found when deployed with a UN mandate and support.

Former Secretary-General Dag Hammarskjöld famously conceptualized peacekeeping as “Chapter Six and a Half” operations, balancing between the pacific settlement of disputes in Chapter VI of the UN Charter and the use of force in cases of threats and breaches to peace in Chapter VII. Following this line of thinking, I would argue that the developments in DRC and Mali represent a move towards “Chapter Seven and a Half” operations, where enforcement action under Chapter VII is delegated to regional arrangements described in Chapter VIII, but either operating as part of UN peacekeeping or in close cooperation with it.[1] In the case of MONUSCO and the Regional Protection Force in the UN Mission in South Sudan (UNMISS), the force is explicitly kept under a UN banner. In Mali, there is significant participation by neighboring countries’ troops in MINUSMA, originally deployed with a peace enforcement mandate as part of AFISMA. These countries have, together with Mali and with the support of France, continued to press for a peace enforcement mandate for MINUSMA. Five of the countries have established the Joint Force of the Group of Five Sahel (FC-G5S), a parallel counterterrorism force.

The integration of sub-regional, ad hoc coalitions in UN peacekeeping operations brings the benefits of UN-provided “logistics, per diems and the legitimacy of the UN [and] is an uneasy compromise that marries several strategic considerations…but may undermine the overall legitimacy of UN peace operations.” Sub-regional member states with a national interest in the conflict are more willing to put troops in harms’ way, and the UN generally provides stronger economic incentives and takes better care of the troops deployed.

The move, both in discourse and practice, towards regional ad hoc coalitions undertaking counter-insurgency and counterterrorism operations as part of, or in parallel and in close collaboration with UN peacekeeping operations, has a significant impact on UN peace operations as well. Within the UN, peacekeeping is perceived to be under an existential threat from these ad hoc initiatives not fitting into existing rubrics of peace operations, threatening to undermine the relevance of the UN in this area. However, the UN Secretariat should be clear that it neither now nor later will be able to conduct counterterrorism operations, and that the Security Council should rather mandate international coalitions in such instances, while the UN should limit its presence to the political dimension.

The combined effect of the inclusion of regional ad hoc coalitions with a strong orientation towards counter-insurgency and counterterrorism is the creation of a new type of “Chapter Seven and a Half” operations. Enforcement action is delegated to regional ad hoc coalitions that have a stronger interest in the conflict and who are more willing to put troops in the line of fire. However, such a development risks undermining the legitimacy of the UN, increasing attacks against peacekeeping operations as well as other parts of the UN, and eroding its role in the mediation and humanitarian domains.

Contrary to the dos Santos Cruz report, I would argue that the doctrinal principles of UN peacekeeping can indeed contain the scenarios that today’s conflict bring. UN peacekeeping operations, mandated under Chapter VI and VII of the UN Charter, are enabled and authorized to use force to protect civilians. However, force should be used to protect civilians and mission staff when there is a clear and present danger. Under the current principles of UN peacekeeping, operations are also enabled to use force preventively, and should do so if needed. By upholding the principles of peacekeeping, the UN and its member states also in effect ask contributing states to update itself and its troops on UN doctrine.

The dos Santos Cruz report provides many relevant and useful recommendations for improving the effectiveness of UN peacekeeping operations, but does not consider the role of UN peacekeeping as a tool in the international peace and security toolbox, and the possible end to that tool if there is a continued move towards peace enforcement and counterterrorism. To preserve UN peacekeeping as a useful tool, there should be a clear division of labor between the UN and other international interventions by regional organizations and/or coalitions of the willing, so as not to set UN peacekeeping missions up to fail, sending peacekeepers into harms’ way, and undermining the legitimacy of UN peacekeeping in particular, and the UN in general in the process.

John Karlsrud is a Senior Research Fellow at the Norwegian Institute of International Affairs (NUPI). His latest book is The UN at War: Peace Operations in a New Era.

[1] The concept has been coined previously, but with a quite different understanding: “…international military intervention followed by regional policing and reconstruction.” (Day and Freeman 2003: 306).