The security of peacekeeping personnel must be improved through enhanced deterrence and better informed decisions on the ground. The Cruz report identifies challenges related to the security of peacekeeping personnel and puts forward solutions on how to address them in the mid/long term. The report efficiently sets a “no-nonsense” and “practical” tone. Backed by alarming numbers, the report calls for changing mindsets, improving capacity, achieving a threat-sensitive mission footprint, and enhancing accountability. While the report effectively emphasizes that the security of peacekeeping personnel should remain a top priority for the organization, the force-based solutions put forward seem to mix the symptoms with the cause and send mixed signals about the aim of peace interventions. Intelligent strength combined with a more comprehensive understanding of security is necessary to sustainably improve how the United Nations is doing business.

One death is always one too many. The raison d’être of the report and its timing are justified by the alarming increase of fatalities among UN peacekeepers. As the report states in its executive summary: “Over the past three years, hostile acts against peacekeepers have doubled each year…during the past 4 years (2013-2017) a consistent increase in peacekeeper fatalities due to violent acts resulted in 195 deaths…more than during any other 5-year period in history…in 2017, there had been 56 fatalities at the time of publication the highest number since 1994.”

Yet these numbers pose a twofold problem: 1) they narrow the focus to fatalities due to intentional violent acts without taking into account the other causes, hence failing to present a bigger picture; 2) they put forward absolute instead of relative numbers in the context of the growing number of troops. Through these choices, the report creates a dramatic effect of perspective. 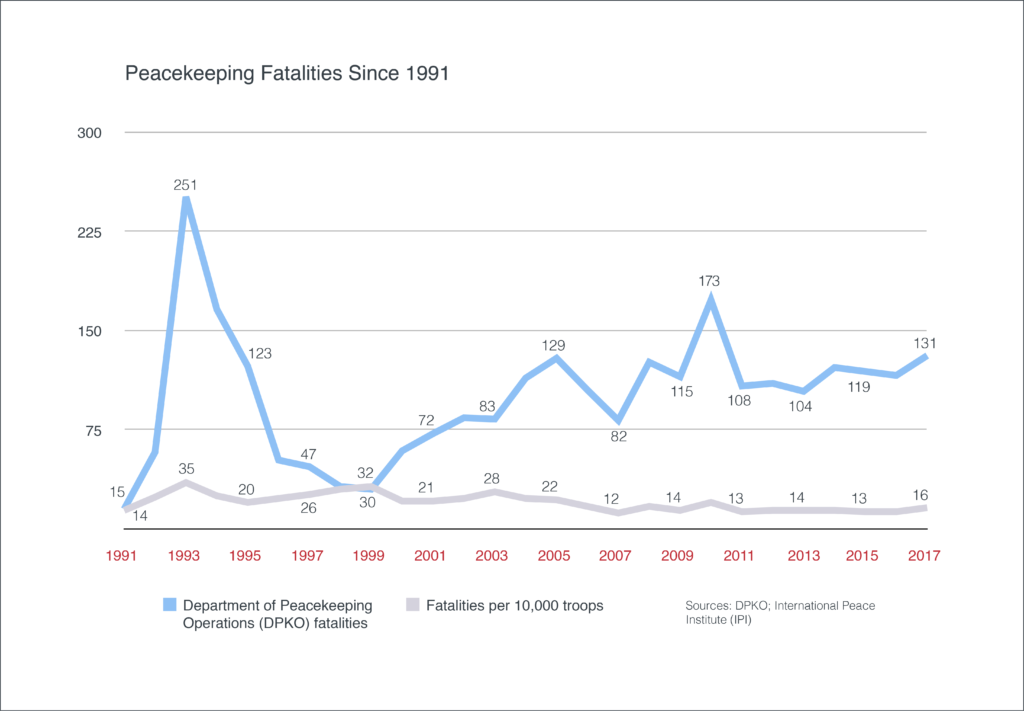 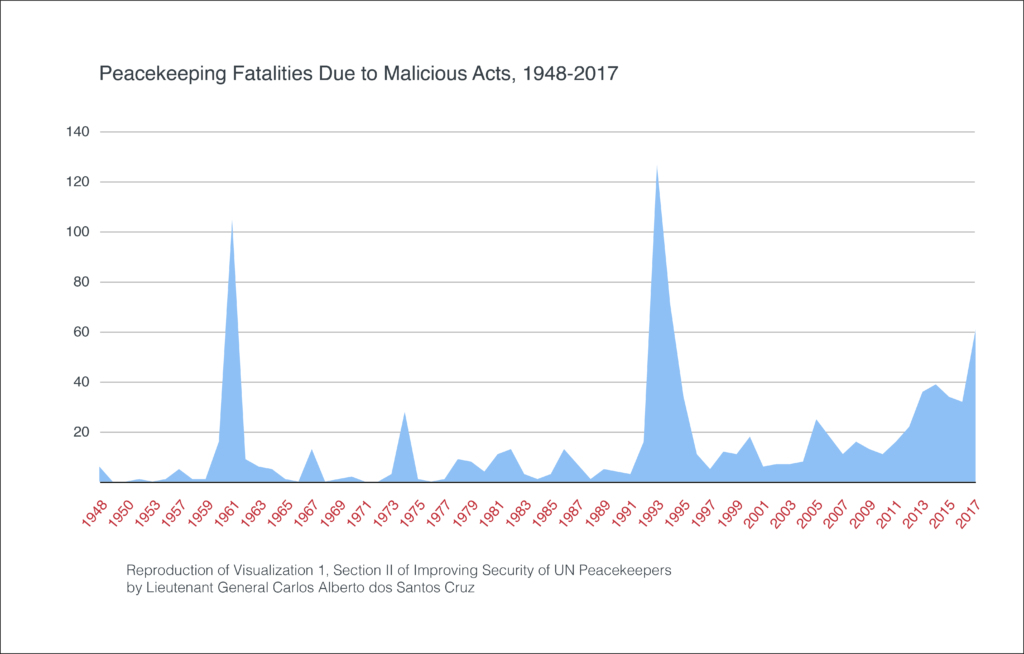 Towards an Intelligent Strength

“Nobody attacks a stronger opponent,” claims the Cruz report, while explaining a few paragraphs later that “Most contingents are equipped and trained for ‘traditional’ peacekeeping, but the threat is asymmetric.” (p.13) These contradictory statements highlight the complexity of operating in a dangerous environment characterized by the omnipresence of seemingly weaker, more disorganized actors willing to take on what seem to be better equipped/stronger opponents. This leads one to question how strength is conceived in UN peace operations and how it matters in the protection of the UN personnel and, ultimately, the accomplishment of the mandate.

In the context of the UN, in which the very objective is to restore legitimate institutional authority, strength necessarily entails legitimacy in the eyes of the local population. The report asserts that by appearing weak, the UN discredits its activities and even calls for attack: “their perception of peacekeepers as weak and indecisive is further solidified. This encourages them to attack peacekeepers.” (p. 21) Indeed, the perception of the population is key to the efficiency of the mission. Yet this perception of legitimacy equates less with being well-equipped than with being able to clearly communicate with the population, including the belligerents, in order to understand their objectives, challenges, and constraints.

According to the report, “overwhelming force is necessary to defeat and gain the respect of hostile actors.” (p.10) Yet force-based solutions are always slippery—force is never quick nor clean. They generate collateral damage that might be detrimental in the long run for the credibility and trustworthiness of the peacekeepers, and impact their perception by the population. By calling on the peacekeepers to boost the security of their base and by irradiating security, the authors should also be mindful not to encourage the “bunkerization” of the UN. Isolating peacekeepers from the population, and signaling they are constantly under attack by those who surround them, can send a mixed message that may, in turn, endanger the peacekeepers more by making them party to the conflict.

According to the report’s authors, peacekeepers “must take the initiative to use force to eliminate threats and end impunity for attackers by quickly organizing special operations” (p.10) and that to “improve security, missions should identify threats to their security and take the initiative, using all the tactics to neutralize or eliminate these threats.” (Executive Summary) War-like measures rarely succeed in convincing the population or the belligerents that the role of the UN is to restore democracy or even the rule of law. As the saying goes, you do not bomb a population into peace.

The reinforcement of security measures should not be done to the detriment of a proximate and efficient communications channel with the population. The report emphasizes the unavoidable need for human intelligence. Human intelligence must be developed through trust and sensors. Measures to flex more UN muscle such as the irradiation of security, including night operations, might project an image of the UN as yet another militia in the conflict and hamper its credibility and legitimacy. The impairment of these two aspects has a direct effect on the ability of the organization to acquire information. For it to be useful, strength must be intelligence driven. The use of force might undermine such strength and actually boost insecurity for peacekeepers.

The Cruz report states that, “Unfortunately, hostile forces do not understand a language other than force.” (Executive Summary) Yet this is more of a symptom than a cause. The UN has a mandate to help locals solve the reasons for hostilities arising. By focusing the means toward the symptoms, it leaves the causes unresolved. By reacting forcefully, the UN sets a bad example of solving conflicts and contributes to the rise of hostilities.

The report also warns that there must be “Zero tolerance of the presence of armed groups.” (Executive Summary) Again, this calls for a clearer definition of the relationship between armed groups and their members. As evidenced recently in the Middle East, it is often safer to be aligned with a violent group than to remain unaffiliated in a civil war. This level of complexity related to armed group affiliation should also be kept in the mindset of peacekeepers. The UN should prioritize understanding the necessary social, economic, and political ramifications to re-establish peace. By adopting a war-like approach and focusing on the label of armed groups, the UN is likely to alienate populations it seeks to support. In turn, this may serve to create divisions with allies and boost the chance of failure.

Security First: Above and Beyond?

The security of peacekeepers should remain a top priority for the UN. The Cruz report focuses “on direct acts of violence against United Nations peacekeeping personnel and direct acts of violence against others which result in collateral injury or death to United Nations peacekeeping personnel” (p. 2), while it claims to exclude security challenges related to “health and medical issues not directly the result of security incidents and deaths from suicide.” (p. 2) The report does devote an important section to the field medical/health system, calling for improved first aid training, CASEVAC/MEDEVAC, improved medical capacity, and the inclusion of medical personnel in operational planning. Yet it overlooks issues related to mental and psychological health. Given that UN personnel are working in high-security risk peacekeeping operations in dangerous environments, the mental and psychological security of the UN staff should also be put to the forefront. Recent research, studies, and articles have unveiled the severity and consequences of post-traumatic stress disorders, depression among peacekeepers, and the extent to which leaving this problem unaddressed puts the peacekeepers, and the mission as a whole, at risk.

While the Cruz report overlooks this problem—one which the UN can address—it offers recommendations that go beyond the organization’s mandate and principles. “In battles and in fights, the United Nations needs to win.” (Executive Summary) A bellicose rhetoric signals a drift from the very principle of peacekeeping and risks alienating local and regional allies, thus boosting the likelihood of “peace” mission creep. Moreover, the UN does not operate in a vacuum. The UN should remain focused on supporting the local population in restoring peace and on partnering with organizations, the roles of which address issues that are not tackled by the UN’s own mandates. Such partnerships would indeed boost the legitimacy and capacity of these organizations to achieve their missions.

The idea behind the formation of the G5 Sahel—comprised of Burkina Faso, Mali, Mauritania, Chad, and Niger—is an example of this point. In 2017, the G5 Sahel launched with the objectives of addressing key regional security issues excluded by the mandate of the United Nations Multidimensional Integrated Stabilization Mission in Mali (MINUSMA), namely the lack of a counterterrorist strategy. The UN should indeed support regional organizations designed to facilitate monitoring and coordination among member states to address common threats to their sovereignty, notably terrorist activities and the traffic of illegal arms and goods. These issues are often beyond the mandate of UN peace operations and, many would say, rightly so.

The Cruz report is a crucial reminder for the UN to boost the protection of its personnel and to improve and adapt its actions to conflict specific settings. It unveils the need to stay in tune with the organization’s principles and attuned to a peace operations’ mandates—ultimately, to restore legitimate authority in host countries.

The narrow focus on the number of fatalities due to violent acts creates a dramatic effect of perspective. It overshadows that the ratio of fatalities per number of troops has been dropping steadily since the 1990s. The capacity and the resolve to use force is necessary, but ultimately a successful deterrence lies in the possibility rather than the actual use of force. Effective threats also require a thorough understanding and efficient communication with the population rather than enhanced hostility toward locals. If the peacekeepers should indeed be supported by sound security mechanisms, namely an effective and reliable medical system, it should include solid mental and psychological support. Finally, the UN is less about militarization of peace operations than a strengthening of alliances at the local and regional level in order to demonsrate that joining forces is necessary to sustainably overcome common security issues. In sum, intelligent strength combined with sound security are key to achieving a profitable peace for all.

Dr. Sarah-Myriam Martin-Brûlé is Deputy Director of the Research Network on Peace Operations and Associate Professor at the Department of Politics and International Studies of Bishop’s University, Canada.