The United Nations Multidimensional Integrated Stabilization Mission in Mali (MINUSMA) is facing its most difficult period since its inception in April 2013. While French and European forces prepare to withdraw, MINUSMA’s mandate likely will be renewed by the Security Council this June, though questions remain about the mission’s performance and ability to respond to shifts in alliances that could impact longer-term stabilization goals. MINUSMA is struggling to implement its mandate effectively, including around two of its main objectives—protecting civilians and making tangible progress in the implementation of the 2015 peace agreement.

Despite foreign pressure, Malian authorities have cooled their relationship with almost all allies in an effort to “diversify” partnerships. Mali remains diplomatically isolated after coups in August 2020 and May 2021, which deepened divisions between the country and its European partners, especially after the junta proposed a five-year transition timeline. Cracks in the alliance have been forming since 2021, including over negotiations with jihadist groups, which the current Malian authorities and the two ousted governments had considered. These divisions, along with France’s announcement in June 2021 of the withdrawal of troops, might explain the posture of the junta toward Mali’s traditional allies. Malian transitional authorities also fear a further deterioration of the security situation, leading them to create a new security strategy involving Russian mercenaries, which is not compatible with the United Nations (UN) mandate.

The ongoing withdrawal of France’s Barkhane forces and the European joint task force, Takuba, leaves a major gap in logistical, security, and intelligence support to MINUSMA’s mission. The current diplomatic crisis also threatens the contribution of German contingents, the United Kingdom’s Long-Range Reconnaissance Group (LRRG), and the Swedish contingent. All provide vital information and logistical and patrolling support to MINUSMA in the Gao and Ménaka regions.

In early 2022, the mission became paralyzed in parts of Mali due to new rules imposed by Malian military authorities. After resuming peacekeeping flights that had been suspended in retaliation for ECOWAS sanctions, the Malian military regime decided to require MINUSMA to obtain authorization for every flight. This decision by Mali’s military regime has had two major consequences.

First, it prevented the mission from implementing its mandate safely and effectively. Ground operations are typically covered by air support, as roadside improvised explosive devices (IEDs) can make them less effective. Air support is also vital to MINUSMA’s humanitarian and surveillance operations. And when French forces complete their pull-out by early summer 2022, MINUSMA will lose access to invaluable French intelligence, putting the UN’s deadliest peacekeeping mission—which has seen more than 250 deaths of personnel since 2013—in further danger of attacks by jihadist groups.

Second, it gave Mali’s military regime control over MINUSMA’s operations, especially in central Mali where the Malian army, along with the Wagner Group, have intensified joint operations targeting jihadist groups since December 2021.

One of MINUSMA’s key objectives is assisting the Malian government with asserting its presence and return in areas of central Mali that were either previously abandoned by the state or seized by jihadists. In early 2021, MINUSMA expanded its operational zone to include the western part of the Mopti region and the entire Ségou region—regions that accounted for 67 percent of incidents related to the protection of civilians in 2020, and have been a theater of multiple human rights violations and extrajudicial killings, including atrocities by the Malian Army. Prior to the coup and the new security strategy, Malian authorities had already been reluctant for MINUSMA to play any role in central Mali, and this has now become even more difficult. 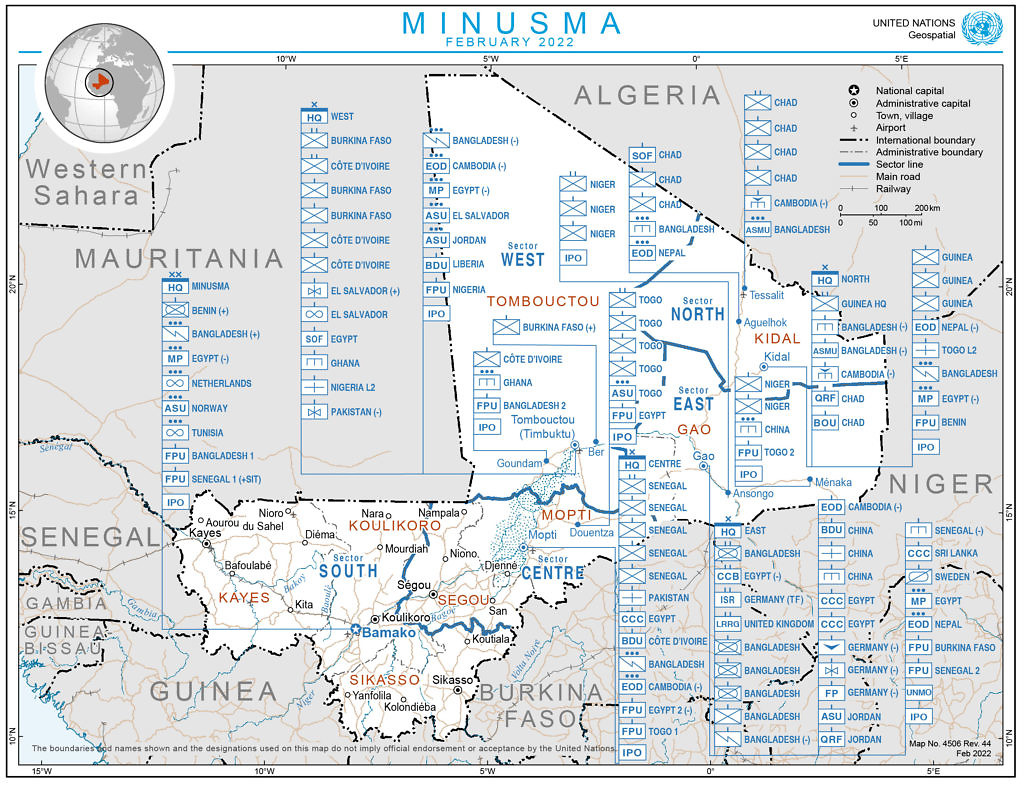 In these areas, remaining populations—left with no choice but to accept living under jihadist rule—will likely face harsh punishments from the Malian Army because they are automatically perceived as collaborators with jihadists. As such, human rights violations and abuses against civilians accused by the government of collaborating and assisting jihadists in central Mali are likely to increase. Furthermore, the increasing use of military operations against “terrorists” in central Mali does not appear to include an effective strategy for the return of state, therefore, leaving space yet again for jihadists to return.

While in Central Mali, the government has adopted a strategy of denying a role to the MINUSMA, in areas further north where Malian authorities are largely absent, MINUSMA is also proving incapable of protecting civilians caught in the middle of violence between jihadists groups and with armed groups signatories of the peace accord in the Ménaka and Gao regions.

Since early February and March 2022, in the Gao region, jihadist groups affiliated with al-Qaeda and the Islamic State have violently clashed, with civilians caught in the middle. Reportedly, civilians accused of jihadist group affiliation were executed or forcibly displaced. In addition, basic public infrastructure, including health centers and water reservoirs, were destroyed. Concurrently, in the Ménaka region, armed group signatories of the 2015 Algiers peace accord continue to clash with the Islamic State in the Greater Sahara (ISGS), with civilians being killed and forced to flee. As with the Gao region, public infrastructure—in this case local market spaces and cell phone towers—were destroyed.

In northern Mali, the implementation of the 2015 Algiers accord has been frustrating, and there is a risk of the agreement’s collapse. New tensions are emerging between the signatories of the peace accord and the transitional government since the former did not participate in the December 2021 national dialogue, thus refusing to accept its recommendations. Prime Minister Choguel Maiga’s controversial comments about the peace accord and references to the Kidal region as a “terrorist enclave” angered the region’s coalition, known as the Coordination of Azawad Movements (CMA). Additionally, key figures in Bamako are taking to social media to ask for revenge in Kidal.

With the impending departure of French troops, who prevented previous escalations between the Malian state and armed groups signatories of the peace accord, tensions might now entice the Malian army to forcibly attempt to regain parts of the north and rush into decisions that would bring the north back into undesirable violence.

The deterioration of the relationship between the transition government and the CMA could be an opportunity for MINUSMA to positively impact the situation and deter violence by encouraging and creating opportunities for dialogue in support of preventing the collapse of the peace accord on either side. Supporting a shift toward dialogue with armed group signatories of the peace accord may also help to enhance the Malian authorities’ inclination and capabilities to address other instances of communal violence through non-military means.

Since its inception in 2013, the MINUSMA peacekeeping operation has faced repeated criticism for its inaction, slow response to intervene in conflict zones, and struggle to protect civilians. This reputation is explained to some extent by the complex security, social, and geographic environment of Mali. Today, MINUSMA is unable to intervene proactively to protect civilians from violence, one of its mandate priorities, or even undertake independent investigating and reporting after an attack, as demonstrated by the recent violent, tragic event in Moura, Mopti Region.

Human Rights Watch (HRW) reported that at least 300 civilians and jihadist fighters were killed between March 27-31 in Moura under murky circumstances. The army and Wagner Group allies allegedly surrounded the village before arresting and executing unarmed civilians over the course of three days. Mali’s government said it killed 203 “terrorists,” though survivors cited by HRW said the majority of victims were unarmed civilians. Witnesses suggested the presence of armed fighters affiliated with Jama’t Nusrat al-Islam wal-Muslimeen (JNIM) explained the Malian army and suspected Russian mercenaries’ arrival to the area on March 27.

In the aftermath, MINUSMA faced criticism for failing to protect civilians in Moura—a mere fifteen-minute flight from their Mopti base. MINUSMA claimed it submitted a request to send their peacekeepers to Moura once they received information about ongoing violence against civilians. Surprisingly, they claimed they learned about the incident days after information was already circulating on social media and among Mali watchers.

At the same time, the apparent delay in submitting the request raises questions about MINUSMA’s response capabilities. Access to timely, actionable information might be further impeded by France’s departure, resulting in yet more shortcomings. As of April 20, MINUSMA is still waiting for an official authorization to deploy a team to Moura to investigate this alleged massacre. MINUSMA’s mission will likely become even more complicated in the coming months due to a lack of collaboration from Mali’s transitional government.

Furthermore, following the incident, Russia blocked a draft Security Council press statement calling for independent investigations into the incident, and instead congratulated Mali on an “important victory” against “terrorism.” The future of the MINUSMA will depend in part on how the French and Russian delegations in New York position themselves.

The Future of MINUSMA

Despite current tensions, MINUSMA and Malian authorities have common objectives to focus on. To achieve stability, to help the Malian state regain its legitimacy, and to create an environment where extremist groups cannot return, Malian transitional authorities should be transparently working with MINUSMA. Misbehavior by state security forces against civilians has been a key driver of violent extremism in Mali since 2013. Atrocities and extrajudicial killings against those perceived to support and collaborate with jihadists might spread fear among populations, but it will simultaneously motivate some members of populations to join jihadist or armed protection groups—continuing the endless cycle of violence and mistrust between government security forces, armed groups, and local populations. Despite criticism, MINUSMA remains the legitimate Malian partner and MINUSMA’s leadership, led by El-Ghassim Wane since March 2021, is decisive in making and keeping the mission relevant.

The Malian authorities have made a clear choice: they have sacrificed long-term efforts to establish a strategy for peace for the sake of cheap political gains—ensuring political support in Bamako in order to guarantee backing for the junta’s transition plan. These ambitions do not serve the populations in the center, which are now the victims. Nor do they serve the Northern populations, as the junta’s ambition is to seek retributive violence rather than building sustainable peace.

The junta has decided to instrumentalize “populism” to remain in power and MINUSMA, caught in the diplomatic crossfire, has become a casualty of it. While not involved in the post-coup political game, the anti-French and anti-foreigner campaigns became anti-MINUSMA. The mission, and the Security Council, now need to acknowledge that their biggest problems are political. There will be no solutions until MINUSMA accepts this context, and there will be no ability to pursue its mandate without a compromise with authorities by focusing on the positives. Small wins for stability in Mali will be better than no wins at all.

Rida Lyammouri is Senior Fellow at Policy Center for the New South.