The illuminated words "Hurry up please it's time" are displayed at the COP26 UN Climate Summit in Glasgow, Scotland. (AP Photo/Alberto Pezzali)

How much the world achieved at the Glasgow climate talks—and what happens now—depends in large part on where you live.

For island nations that are losing their homes to sea-level rise, and in other highly vulnerable countries, there were bitter pills to swallow after global commitments to cut emissions fell far short of the goal to keep global warming to 1.5 degrees Celsius (2.7 degrees Fahrenheit).

For large middle-income countries, like India and South Africa, there were signs of progress on investments needed for developing clean energy.

In the developed world, countries still have to internalize, politically, that bills are coming due—both at home and abroad—after decades of delaying action on climate change. The longer the delay, the more difficult the transition will be.

There were also signs of hope as coalitions of companies, governments and civil society, and indigenous peoples groups forced progress on issues such as stopping deforestation, cutting methane, ending coal use, and boosting zero-emissions vehicles. Now, those commitments must be acted upon. There are five key elements to watch over the coming year as countries move forward on their promises.

Bending the Curve to 1.5 Degrees

Going into the Glasgow summit, countries’ commitments had put the world on a trajectory for about 2.9 degrees of warming this century, well beyond the 1.5-degree goal and into levels of warming that will bring dangerous climate impacts. Indian Prime Minister Narendra Modi’s announcement in the first days (much to the surprise of Indian observers) that India would reach net zero emissions by 2070 and generate 50 percent of its energy from renewables by 2030 helped lower that trajectory to 2.4 degrees.

Countries agreed to return for the next round of climate talks in November 2022 in Sharm el-Sheikh, Egypt, with stronger commitments to put the world on track for 1.5 degrees. 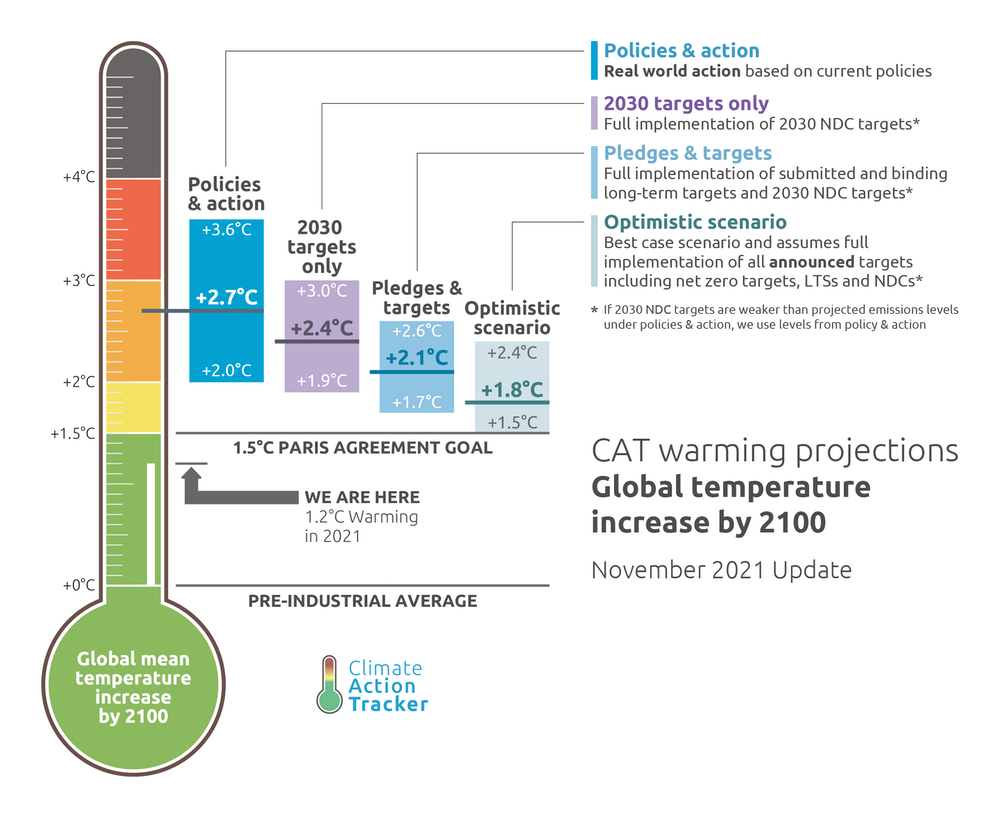 That turns the spotlight back on national action. China reminded everyone that goals must be backed with plans for implementation. United States (US) Cabinet members and Congressional leaders had much to say in Glasgow about being “back,” after the previous administration withdrew from the Paris climate agreement. Yet they had little to offer in terms of the US share of the finance, and the world cast a worried eye over its continued partisan politics.

While all countries are important for reaching the world’s climate goals, some are more important than others. Countries that are high emitters and heavily dependent on coal will be a focus of international attention in the coming months, not just to phase down coal but importantly to fund a just transition to green sources of energy and the necessary electricity infrastructure.

The poster child for this approach is South Africa, where a presidential commission has worked for three years to develop a just transition plan and has been able to attract US$8.5 billion from the United Kingdom, the European Union, the US, and others to help them execute on it. That, coupled with guarantees and other financial aid that could help draw further private investment, could become a replicable model. The key was national ownership. In the year ahead, look for plans to come together in Indonesia and Vietnam, and other countries needing to fast forward away from coal.

Many developing countries already have national platforms to deliver on their commitments, but throughout Glasgow’s conference halls, officials complained that finance was not flowing to help them succeed.

This is not just a climate finance problem. Many countries are also facing economic disruption from the COVID-19 pandemic and have chafed at the way international financial institutions fail to address issues of access to finance and trade. Advanced economies did not come to Glasgow ready to provide even the $100 billion a year in finance promised a decade ago, which shrank the landing zone for agreement on all issues.

China calculates the value of growth lost through a few measures, such as floods and heat. Unsurprisingly it amounts to trillions of dollars. It may be a useful exercise whenever a government balks at the “cost” of climate action.

In the end, governments agreed to reach the $100 billion annual climate finance target within the next two years and agreed that adaptation funding should double. But with the UN Environment Programme estimating that adaptation funds will need to quadruple by 2030 from today’s $70 billion, there is a long way to go.

The Glasgow Climate Pact also criticized the traditional channels of public funds that set the conditions for finance to flow, including the International Monetary Fund (IMF) and the World Bank. Look for G7 and G20 countries, the largest shareholders of these institutions, to examine how they can be managed differently to respond to the climate emergency. All eyes are on Italian Prime Minister Mario Draghi, current president of the G20 and an experienced central banker. Actions could range from bolstering the Climate Investment Funds, managed by the World Bank, and loosening the terms and conditions of the IMF’s proposed management of the reallocation of special drawing rights, to incentives to leverage more private funds and take more risk.

Finance Pledges and Cries of “Greenwashing”

In the first week of Glasgow, the titans of the financial industry heralded the Glasgow Financial Alliance for Net Zero—the commitment by financial institutions representing $130 trillion in assets to accelerate the transition to a net-zero emissions economy. The shifts within financial markets away from exposure to carbon emissions were palpable. But without more detail, the announcement attracted cries of “greenwashing.”

Organizers of the alliance will need to work hard to hold members to account, and throw out those still underwriting the coal industry, for example. The principle of getting everyone pledged and in the tent and then making them improve has been used before, for example, the Net Zero Asset Managers Initiative. But this only works with transparency, and buried among the press releases was their report that, of the advertised $57 trillion of the initiative’s assets under management, only an estimated 35 percent is actually in line with net zero.

The United Nations (UN) secretary-general announced an expert group to propose clear standards for companies and others making net zero commitments, partly in response to furor around greenwashing. That group is expected to report back in 2022. At the heart of Glasgow was a new seriousness around transparency, credibility, integrity, and accountability. Watch this unfold this coming year.

Loss and damage: The Third Leg of a Wobbly Stool

Climate action is a three-legged stool—mitigation, adaptation and loss and damage. Loss and damage was mentioned an unprecedented 12 times in the final Glasgow texts, but without commitments to funding or mechanisms to secure funding. Loss and damage, or reparations, can be understood this way: you broke it (or endangered it), you pay for it. But, afraid of lawsuits in international courts—which the US does not belong to—or afraid of the costs, developed countries have opposed progress on the issue in recent years.

Developing countries left Glasgow disappointed, but there was no escaping the debate. Watch for a design of a mechanism to help pay for loss and damage and plans to start funding it. With the next year’s UN climate conference in Africa, this will move center stage.

There is a Scottish proverb, “fools look to tomorrow, wise men [sic] use tonight.” There were wise people in Glasgow, and fools too. But there is not a night to lose in the year ahead.

This article, first published in The Conversation with the title “COP26 left the world with a climate to-do list: Here are 5 things to watch for in 2022,” is part of a series reflecting on global climate action in the wake of COP26.

Rachel Kyte is Dean of the Fletcher School, Tufts University.