A ThyssenKrupp coking plant steams around the clock for the nearby steel mill in Duisburg, Germany, on January 30, 2020. The cuts in greenhouse gas emissions pledged by governments around the world aren't enough to achieve the goals of the Paris climate accord, according to a 2020 United Nations report. (AP Photo/Martin Meissner, File)

Fresh emissions targets from Saudi Arabia and Australia—two of the world’s largest fossil-fuel producers—are due to arrive just in time for the global climate talks (COP26) in Glasgow in November. These would commit the two countries to reduce domestic emissions to net-zero by around mid-century—though both are expected to continue exporting fossil fuels for decades to come.

For the leaders of countries and governments that produce fossil fuels, United Nations (UN) climate summits are a public relations boon—they get to talk up their commitments to a green and clean future without being held to account for their disproportionate role in fueling the problem. It is hard for experts, let alone the average citizen, to tell fact from fiction when it comes to climate policies.

Because it is only domestic greenhouse gas emissions that are counted for the purpose of the UN climate negotiations, burning exported fossil fuels counts toward the emissions of the importing country. Accordingly, the role that major fossil fuel exporters like Saudi Arabia (oil and natural gas) and Australia (coal and natural gas) play in stoking global heating is not accurately reflected in the talks.

Unlike some areas of international cooperation, such as limiting the spread of nuclear weapons, climate summits aim to control something which evades easy calculation. Nuclear weapons and their production facilities are tangible, chunky, and relatively few in number. Greenhouse gases are everywhere, invisible, and caused by many different processes—from cow digestion to steel production.

These gases are also in constant flux. Emissions are produced from ubiquitous sources, but there are also natural systems—especially forests and soil—that draw carbon dioxide (CO₂) from the atmosphere. These natural removals of carbon are known as sinks. That is why scientists and governments speak of net greenhouse gas emissions: emissions minus removals.

It is relatively easy to monitor aggregate levels of CO₂ in the global atmosphere. This is why scientists have a clear picture of how badly off-track the world is with tackling the climate crisis. But the complexities concerning sources and carbon sinks make it easy for governments and corporations to obfuscate their real contributions to climate change.

For example, countries with large swaths of uninhabited land, like Australia, have become especially adept at gaming the systems of accounting for net emissions of CO₂. Australia effectively gets credited for the considerable amounts of carbon stored in forests, which give the appearance that overall emissions have been falling, even though emissions from burning fossil fuels have been growing for decades.

A reliable way to tell whether a government is being deceptive in lauding their climate credentials is to look upstream and see whether they are producing the coal, oil, or gas—which ultimately causes about three-quarters of global emissions—and if so, what they are doing about it.

Extracted fossil fuels are much easier to monitor and verify than greenhouse gas emissions. They come from a relatively small number of sources and are already measured by multiple parties for a range of purposes. Customers need proof that the shipments they receive reflect their contracts with suppliers. Governments collect production information to assess a company’s compliance with licensing requirements, tax liabilities, and customs obligations.

Fossil-fuel infrastructure and projects are even easier to monitor. Oil rigs, gas pipelines, and coal mines are large, making them easy to see both on the ground and via satellite. These features make it simpler to hold fossil fuel-producing countries to account for their contributions to global heating, compared with the more ambiguous measure of net emissions.

In a new report, the UN Environment Programme and other research institutions found that governments plan to produce more than twice the amount of fossil fuels in 2030 than would be consistent with limiting warming to 1.5°C above pre-industrial levels—the goal of the Paris Agreement. Countries’ fossil-fuel production plans and projections in aggregate even exceed, by close to 10 percent, the levels of global fossil-fuel production implied by their own climate pledges. 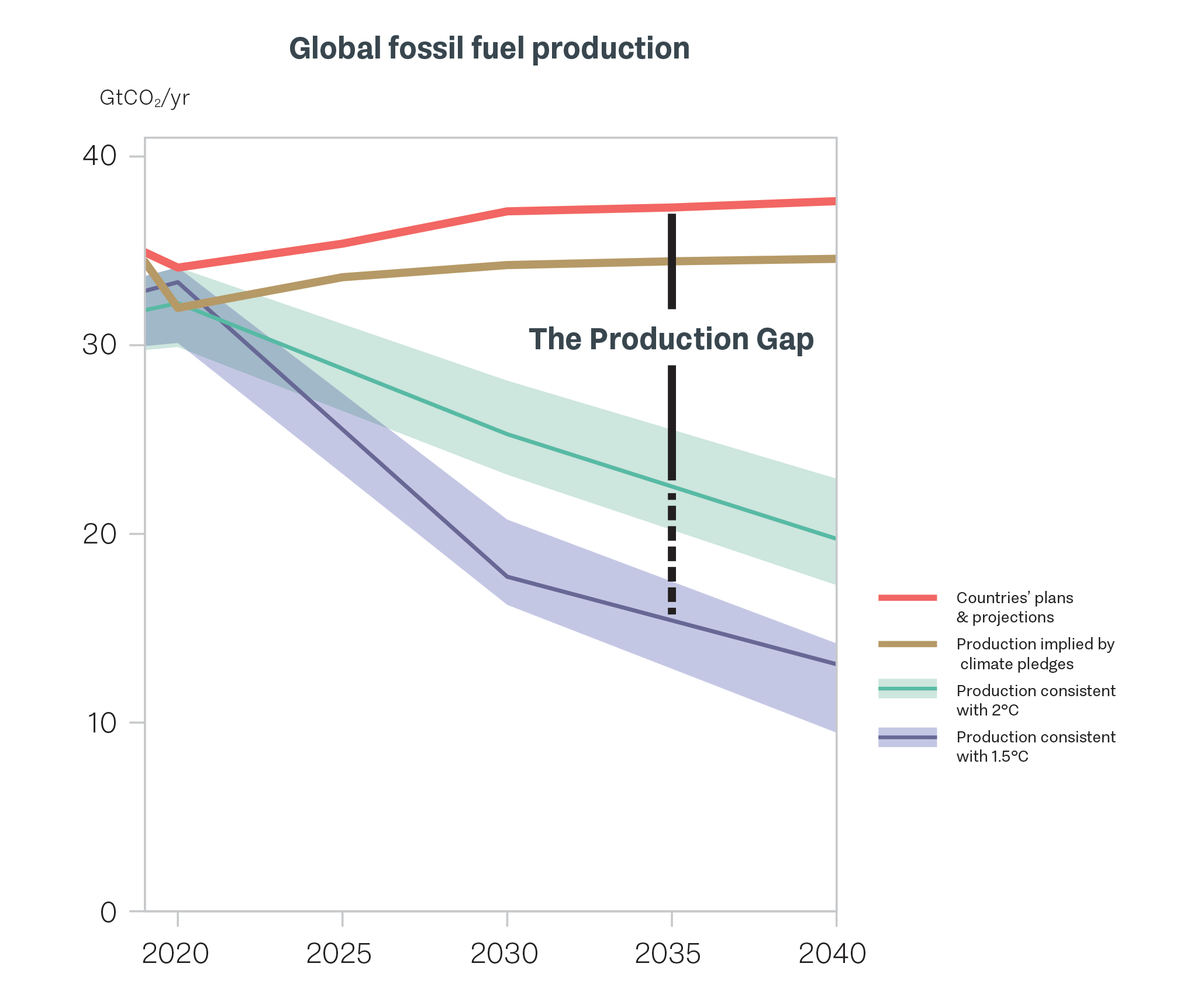 Shockingly, governments are continuing to pour fuel on the fire. G20 countries have directed more than $300 billion in new funds toward supporting fossil-fuel production, such as subsidies and tax breaks, since the beginning of the pandemic—about 10 percent more than they have invested in clean energy.

The report echoes recent calls for greater transparency around fossil-fuel production and the support—financial and otherwise—governments provide at home and abroad. Research by various organizations has provided a better understanding of this, but the information is incomplete, inconsistent, and scattered.

Governments could help by disclosing plans, funding, and projections for fossil-fuel production, and how they intend to manage a just transition away from coal, oil, and gas. Fossil-fuel companies should disclose their spending and infrastructure plans, as well as all the greenhouse gas emissions their product is responsible for, and financial risks to their business from climate change.

Numerous environmental organizations are working to build a global picture of the sources and flows of fossil fuels. So even if governments fail to illuminate the activities of fossil-fuel companies and their role in it, they can still be named and shamed.

Only considering a country’s net greenhouse gas emissions gives fossil fuel-producing companies and governments a free pass to bluff their way through the climate negotiations. To prevent the current public relations­–managed discourse from forestalling effective climate action, we should turn the conversation to fossil-fuel production.

Fergus Green is lecturer in Political Theory and Public Policy, at University College London. He is a co-author of Chapter 5 of the Production Gap Report (referred to in this article) on “The critical role of transparency in addressing the production gap.”

This article was originally published in The Conversation. It is part of a series reflecting on global climate action in the wake of COP26.