When looking to the future of peace operations, as undertaken in the current exercise by the United Nations Department of Peace Operations in the Future of Peacekeeping Operations initiative, it may be helpful to use exploratory scenarios. These collect and collate thoughts and ideas relating to possible long-term developments, and assess their different impacts by mapping out different alternative futures. Not only do depictions of scenarios stimulate discussions, but they may also serve as an instrument for policy planning, as they constructively explore plausible futures and realities that require forward thinking.

The question about how the future of peace operations will look is closely tied with the question of how the world will develop in the next two decades. This in turn depends on the degree of cooperation within the world system—i.e., whether the world system will have increased or declining cooperation—and on the type of actors playing a role in security in the world system—i.e., whether security will be determined mainly by states or by non-state actors. These two key uncertainties are the basis of a scenarios grid consisting of two axes (see Figure 1 below), which was developed in 2010 for the Future Policy Survey for the Netherlands Armed Forces.

The two non-state-centric scenarios—fragmentation and network—are based on the rise of non-state actors. States are present in these scenarios, but non-state actors have gained more influence. While fragmentation is mostly everyone for themselves, in the network scenario there is cooperation on a global scale between various types of actors that are closely connected and mutually interdependent (these scenarios and their characteristics are summarized in Table 1). The description of peace operations in each quadrant is based on a subsequent study.

Figure 1: Scenarios for the Future of Peacekeeping 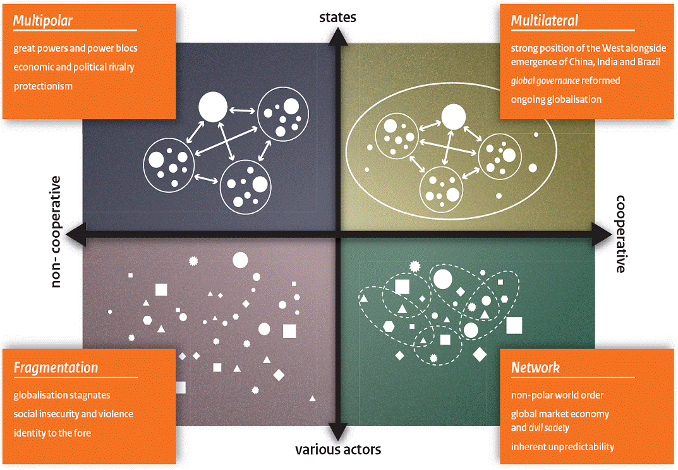 Peace Operations in a Multipolar Scenario

In this quadrant, different poles would take care of their own security. Regional organizations would have developed capabilities to deploy their own crisis management operations. Interests rather than values, such as protection of civilians, would count. As a result of a lack of cooperation between UN Security Council members in this scenario, in the multipolar quadrant the great powers would agree to deploy peace operations less frequently. Consequently, the number of ongoing missions would decrease.

The operations that the Security Council would manage to agree on would likely be traditional UN peacekeeping operations, which would be neutral and predominantly military, and deployed at the fringes of or between the poles. In some areas different poles may also deploy contesting “peace operations,” leading to an increase in complex constellations of missions.

A second type of operation in this scenario would be more robust stabilization operations, sometimes after military interventions in unstable zones inside poles, or in the “backyards” of poles. These operations may occasionally take place, but likely without a Security Council mandate, and would be conducted by the core—generally in the context of a regional organization. These operations would be aimed at strengthening alliance or pole security and would likely operate in more violent mission environments. In each pole, other values would be used to legitimize these military interventions or stabilization operations.

Both sorts of operation would have a relatively long duration because, in general, political processes needed for peace in such circumstances do not get off the ground, as conflicting parties are often able to get military support from other poles.

Peace Operations in a Multilateral Scenario

In the multilateral quadrant, relationships in the Security Council would be cooperative and conflicts generally solved at the negotiation table. In fragile states, the “international community” would cooperate to overcome threats, mainly to human security, democratization, strengthening human rights, and for the purpose of protection of civilians. Two types of operations would be dominant in this scenario.

Second, particularly after peace agreements but also in some cases after (humanitarian) military interventions, broadly-mandated multidimensional, robust nation-building operations would be deployed. Such nation-building operations would consist of large civilian components, as well as police, to address the underlying problems and causes of fragility in the host states. Attention would be given to, among other issues, the rule of law; human rights; democratization; disarmament, demobilization, and reintegration; and security sector reform. These missions would be generally deployed for a longer period and have a civilian development assistance lead. The military aspects of operations would be embedded in a wider integrated approach, and in an increasing number of cases they could be called civilian missions only. The UN is the key actor in missions in this quadrant, not only because all missions would be UN mandated, but also because it is heavily involved in most missions. Nonetheless, particularly when the UN is overburdened or does not have the operational capacity, regional organizations may step in.

Peace Operations in a Network Scenario

In the network quadrant, the international system would be the most complex. States and intergovernmental organizations would no longer be dominant, but would cooperate on a near equal footing with non-state actors. The world would be essentially non-polar, and the global market economy and global civil society would determine the direction of developments in the international system. Decisions would no longer be made in the Security Council; networked alliances and informal groupings of various actors would ensure global governance. The challenges in this scenario would also be networked: organized crime, terrorism, and piracy networks that cooperate closely.

The UN, as an intergovernmental organization, would be just one of the players in peace operations because different actors—often non-state organizations, companies, and ad hoc coalitions of the willing—would work together in hybrid missions. While the UN would still play a role in the implementation of or in support to parts of such missions, as well as in coordination, large parts of missions would be outsourced. Military or police components would, at times, be implemented by private military/security companies, and humanitarian and development components by non-governmental organizations. In fact, some peace operations may be completely outsourced. The success of missions in this scenario would be largely determined by the extent to which all these different actors are able to work together in an integrated way.

Peace Operations in a Fragmentation Scenario

In the fragmentation quadrant the international system would be crippled and remilitarized, with distrust being the norm. Non-state actors would have taken over, or at least would be creating significant levels of violence in large parts of the world, and providing some governance in those regions they control. Although the need for peace operations to deal with the violence and mistrust would be enormous, the ability to actually deploy them would be limited. Agreement on the deployment of missions would likely be rare, and neither the UN nor regional organizations would engender the level of trust needed for their deployment. It is debatable whether interventions in this scenario could actually be called peace operations because most international (military) interventions would be unilateral or ad hoc coalitions’ military invasions and occupations. Nonetheless, the countries undertaking them would portray their actions as peace operations to increase their legitimacy. As a result, at times different “peace operations” deployed in the same mission area would be in open armed conflict with each other.

These “peace operations” would be short, take place in the immediate neighborhood of the intervening countries, and have the military clearly in the lead. Operations would be mainly high end, initial entry, and short lasting. Neither international nor human security would be a leading motive for them. The concept of the Responsibility to Protect would be alien in this scenario, and protection of civilians or human rights would be rhetorical at best. National or state security would determine where interventions take place because the (national) security interests of individual states or governance units would rule this scenario. The best the UN could do in this scenario is monitor interventions and report on violations of human rights, international law, and humanitarian law.

Table 1: Key Characteristics of Peace Operations in Each Scenario

Reflecting on insights from these scenarios makes clear that what is often regarded as probable, is actually uncertain. When, how long, where, for what purpose, and how peace operations are deployed, in what form and by whom, depends on the quadrant in which international security will find itself in the future. This will determine the role the UN will play and the norms that will lead peace operations, but also the character of the missions deployed. It would not be prudent to build a strategy merely on expectations or forecasts extrapolating on recent experiences, as these ignore how the future will be different due to trend breaks.

Scenario planning is useful to better prepare for the unexpected, as it helps organizations to embrace uncertainty. By looking at what is required for each scenario, a variety of policy options can be thought through, and an overall plan drawn up. If a certain capability or action is required in all four scenarios, it is a no-brainer. If a policy option only works in some of the scenarios, it is wise to consider how to invest or divest as required. This will increase the UN’s organizational flexibility and allow it to be prepared for whatever the future may demand from it.