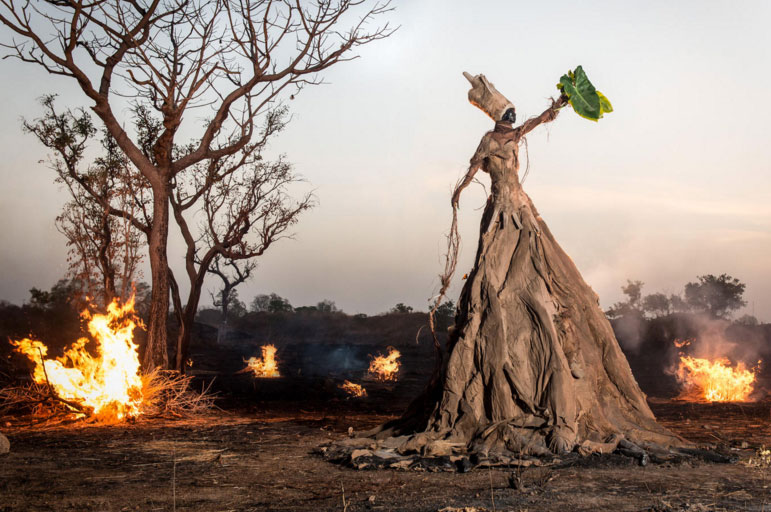 After 30 years living abroad, photographer Fabrice Monteiro returned to Africa to find his homeland an environmental disaster. Inspired by an idea to educate children, Monteiro teamed up with fashion designer Doulsy to create “The Prophecy,” a tale of nine spirits that warn of the perils of neglecting the environment. The project has particular resonance this year with the recent adoption of the UN’s new Sustainable Development Goals and the upcoming climate change conference where a global agreement is expected.

The interview was conducted by Jill Stoddard, Editor of the Global Observatory and Director of  Web & Multimedia at the International Peace Institute.

What made you decide to do this?

I grew up in Benin in West Africa in the ’80s, and when I came back to the continent four years ago, I was amazed by how much it had changed in 30 years. It had gotten very, very dirty. I remembered that Africa was very clean—you wouldn’t see any trash in the ’80s. But even the water now is super polluted, and some days you cannot get into the water in Dakar. In 100 years, we literally destroyed where we’re living.

I wanted to do something as a photographer. And to me, the most natural way to speak to the people was to use the culture. That’s why I used this medium of genies, of the supernatural. I imagined stories—like the Earth would be mad, and send a representative to talk to the humans and tell them that they have to be aware of what is going on. I grew up in Africa, and I had a huge African influence, but I also had a huge European influence—my mother was Belgian, and my father Beninese. So in all my work, it’s like a mix of those things, and religion is very present. I think it’s also because I come from Benin, the birthplace of voodoo, and, not so much voodoo, but the belief in animism, the belief in spirits is major in Africa.

I wanted the stories to talk to children, because in Africa, the adults—they’re not really concerned by these problems; they just do their thing. But I thought that if you could give some enjoyment and sensitivity to kids, that could bring up a new generation that would be concerned about the environment.
Without education, people are not aware of their environment. In Senegal, for example, the people will tell you that what is outside is not owned by anyone. So you can throw out your garbage—it’s not a problem, because nobody owns anything outside.

You also brought this idea to Australia. 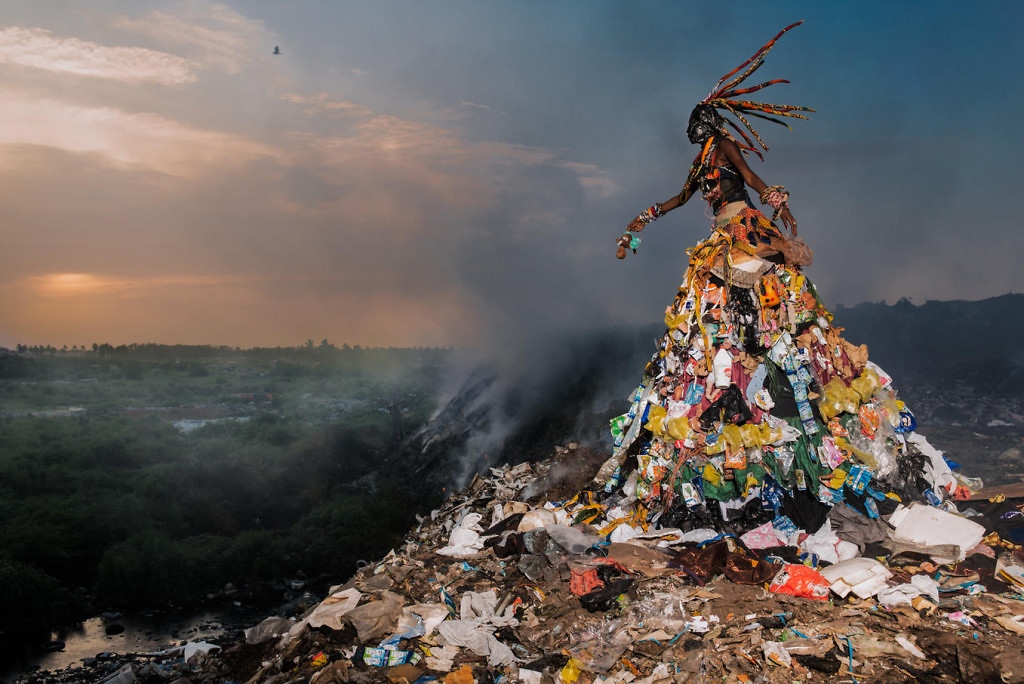 Yes, because my idea was not to stigmatize Senegal. It’s a global problem. If you look at any of the environmental topics, they affect the whole planet. It’s just that I believe in Africa. And it’s more obvious here, because you can see things, but the same problem would be in France or wherever; it’s just more hidden.

For this project in Senegal, I had the good luck to meet Haïdar El Ali, who is a big figure in ecology in Senegal. I asked him, “What do you think are the major environmental issues in Senegal?” He gave me a list of twenty environmental issues, and I picked out the nine that spoke the most to me, the ones that I could really create something out of it. The idea would be to do the same on every continent, and create a global Prophecy that would bring together the whole planet.

I was going to present the project at a meeting of the International Union for Conservation of Nature, which is something that happens in Sydney every 10 years. And I said, that’s good, but if I go to Australia, I would really like to do a Prophecy there.

As I said, it’s very important for me to not stigmatize countries. It’s global. Like Australia—it’s a rich country and they know that they are destroying the Great Barrier Reef, but they keep on doing it for economic reasons, or whatever. I wanted to talk about the bleaching of the coral, which is created by global warming. The idea was to create a spirit that would represent the whole life of the coral reef, and the image would represent the spirit of the reef leaving the reef, leaving behind this skeleton of the reef where there’s no more life.

Have you found that people are responding to your work in the way you had hoped?

I had a very good reaction from people. For example, there used to be blood coming out of a canal that went straight into the ocean, coming from the slaughterhouse in Dakar. Twenty four hours a day, they would just throw everything in the ocean. It’s like that for everything, actually—it could be industrial or domestic, they just throw everything straight in the ocean. And what I heard—I didn’t verify it—but I heard that since we did that photograph and it’s been shown here and there in Senegal, they stopped.

There’s a lot of things happening in Senegal right now, and people are more and more aware of, first, their power. It’s quite new since independence, and now you have this generation in their 20s, 30s. They’re confronting the government, which was never done before, because the people were not informed. And I think the Internet is changing a lot of things in Africa because people are becoming informed. They know what’s going on, and the governments can’t fool them anymore. And they’re starting to really fight for their rights, and this comes from young people.

At the United Nations and here at the International Peace Institute, the intersection between environmental degradation, climate change, and how it links to conflict and violence is a big topic.

Yeah, like when we saw all these Syrian refugees on the highways in Austria and Germany, you realize that we have this false idea that the planet is huge and the conflict will not reach the West, because Syria is far away. And to then realize that the planet is super small, and that we have to be our own neighbors. And either we grow together and we get better together, or it’s going to get worse and worse. We cannot afford to be egocentric anymore, because this concerns the whole planet. 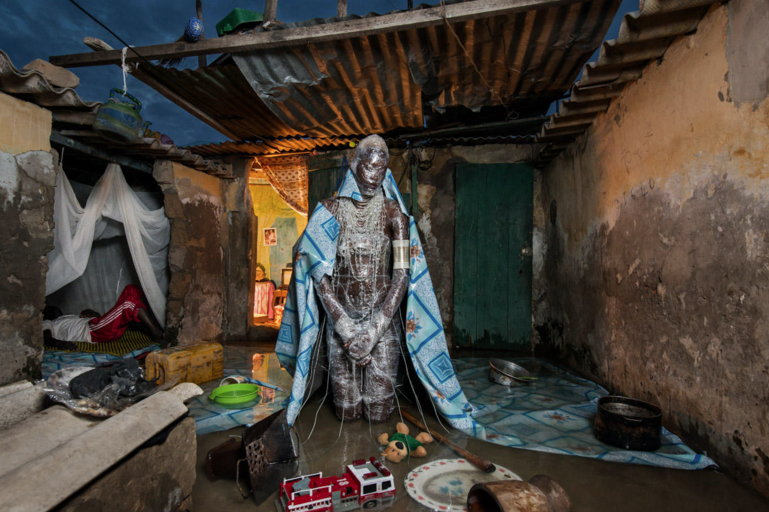 And when it comes to environment—we are talking about the air that we breathe, which means that if we keep on going like this, it’s not the other people’s environment we’re destroying: we’re destroy our own air, our earth, our oceans. Everything is connected. I really believe that the whole of humanity has to think a different way, and stop considering that profit is the only god and the only thing we should follow.

Obviously, this is a very personal issue for you. Do you find that you make choices that are informed by this relationship you have with the environment?

Definitely. For example, I live in Dakar, and there are little boutiques along every corner in the city, in cities across Africa. And whatever you buy, they will give you plastic bags. Even if you buy a cigarette, they will put it in a plastic bag. And I’m saying every time, “No plastic bag, I’ll just take it,” or “I’ve got my own bag.” You can feel silly, but you can see there’s something that is connecting in their mind because they smile at me and say, “Ah, no plastic, eh? No plastic?” It’s very small, but I think it’s all these little steps that are going to make the people aware of what is going on and find a different way.

Something that is very particular to Africa is that there was a big gap in the natural evolution of the continent. Because of slavery, and then colonization, this continent has had to work for modernism and productivity when it didn’t have the tools. They didn’t get a chance to integrate progress naturally with their culture, and the West became their reference for what the standard was. And with globalization, everybody is looking to the United States, but they don’t really consider that they have a lot to give to the world because of their traditions, because of their strong culture, and because of the values that they used to have and don’t anymore because times have changed.

That is something that is very particular to Africa—colonization was a rupture in the natural progression of the continent. I really feel it in everyday life, and that is why I think education is so essential in Africa, because people are just not aware of it. They don’t see things, and if you don’t tell people, it doesn’t come naturally. They could have a dump site at the entrance and the exit of the village. And the kids are going in it, and they never knew anything else, so today it’s normal, it’s natural. You can throw it there because all that surrounds the house can be a dump site; that’s the way it is. And that’s why education is so important. Like saying, “No, that is not the way it is. That’s not natural.” We have to fight against that.

Do you think modern Africa and the Africa that believes in spirits are at odds with each other?

I don’t think there is an opposition between modernism and tradition, but I believe tradition, culture, and history can stimulate a new approach to modernism that fits better with the society. 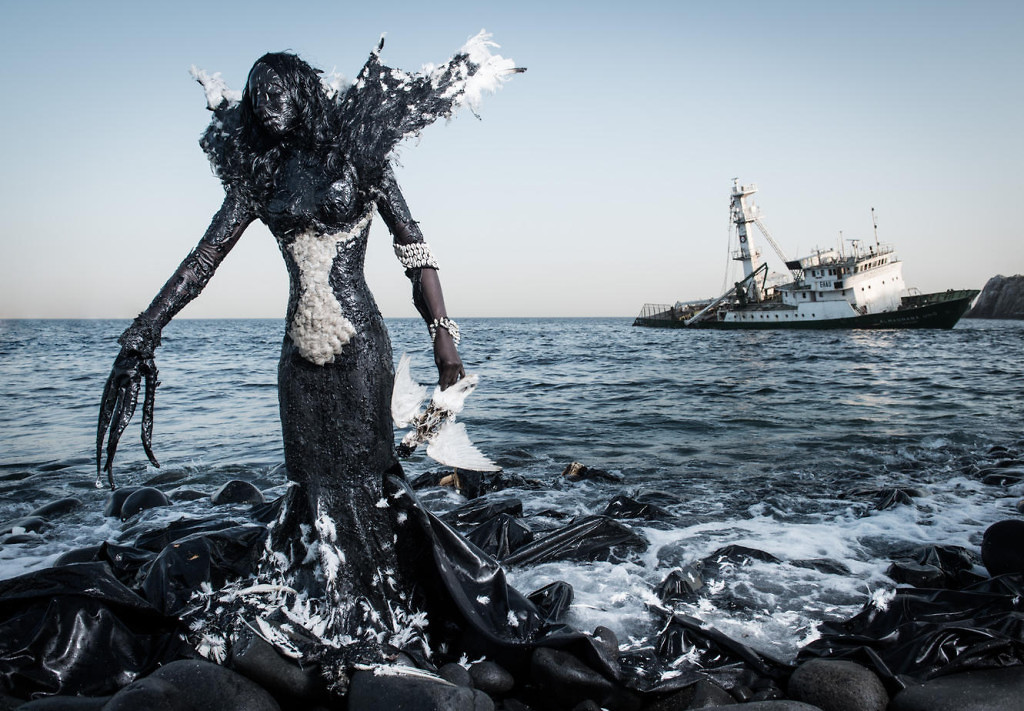 Finally, can you tell me a little bit about your collaborator Doulsy— how you met him, and what it was like to work with him?

I always try to collaborate with local artists. Doulsy is a designer, and he was doing all his clothing with recycled fabrics. When I saw his work, I was very inspired to create these big dresses. So I would come to him and say, “OK, we’re going to shoot it in this place, I’m imagining that the spirit is going to be like this, it’s going to wear this.” Because he had the technical knowledge—I don’t know how to design clothes. We said, “OK, we need to make a dress that looks like oil.” So we started all these experiments to try to make it, to build a dress that would look like oil. And for the huge dress of plastic, we used all the materials that we found on the site to create something, and have the spirit really be part of that environment. We had to experiment first to see if it works, if it doesn’t work; and then we made it.

The interview was edited for clarity and brevity.