In conflict-afflicted South Sudan, displaced women leaving the safety of United Nations protection of civilian sites to gather firewood, food, and water face the threat of rape by soldiers and members of other armed groups. These women routinely have to make difficult choices between providing for their family’s sustenance and for their personal safety. Yet, when two or more trained unarmed civilians accompany groups of up to 20-30 women, they have been able to avoid assault.

This is just one example of unarmed civilian protection (UCP), a growing set of methods for protecting civilians and reducing violence in conflict zones. Unarmed civilians trained to implement UCP are recruited from many countries and cultures to live and work with local civil society in conflict-affected areas. A recent study by the Mir Centre for Peace at Canada’s Selkirk College found over 50 civil society organizations have applied UCP methods in 35 conflict areas since 1990.

There is also increasing documentation of its effectiveness. An external evaluation of UCP proponent Nonviolent Peaceforce’s (NP) work in Mindanao, the Philippines, found that “Armed actors on both sides confirm that the presence of a third party ‘watching over them’, including NP, has served to temper their behavior.” NP [with which the authors are all affiliated] worked with local NGOs to provide daily monitoring of ceasefire violations between the Philippines government and the Moro Islamic Liberation Front, intervening in cases where civilians came under threat.

A Northwestern University study of the group Cure Violence’s work in the urban setting of Chicago also showed statistically significant results across all communities where UCP had been employed. There were reductions in shootings by 41% and killings by 73%, a fall in shootings in particular hotspots of up to 40%, and the elimination of retaliation killings in five of eight communities surveyed.

UCP can be applied at all stages of a conflict, but can be particularly effective at an early stage, to prevent or mitigate an escalation of violence, and also after violent conflict has subsided, to support the transition to a peaceful society. The approach works in conflict areas where no UN peacekeepers are present, such as Mindanao, Myanmar, and Colombia, and it can also complement the work of UN missions, as in the case of South Sudan.

Unlike traditional military peacekeeping or armed private security firms, UCP is done without the use of, or reliance on, weapons, and is based on prioritizing the building of relationships over the employment of power. These relationships emphasize the achievement of three goals: the direct protection of civilians, violence prevention, and the strengthening of local peace infrastructures. 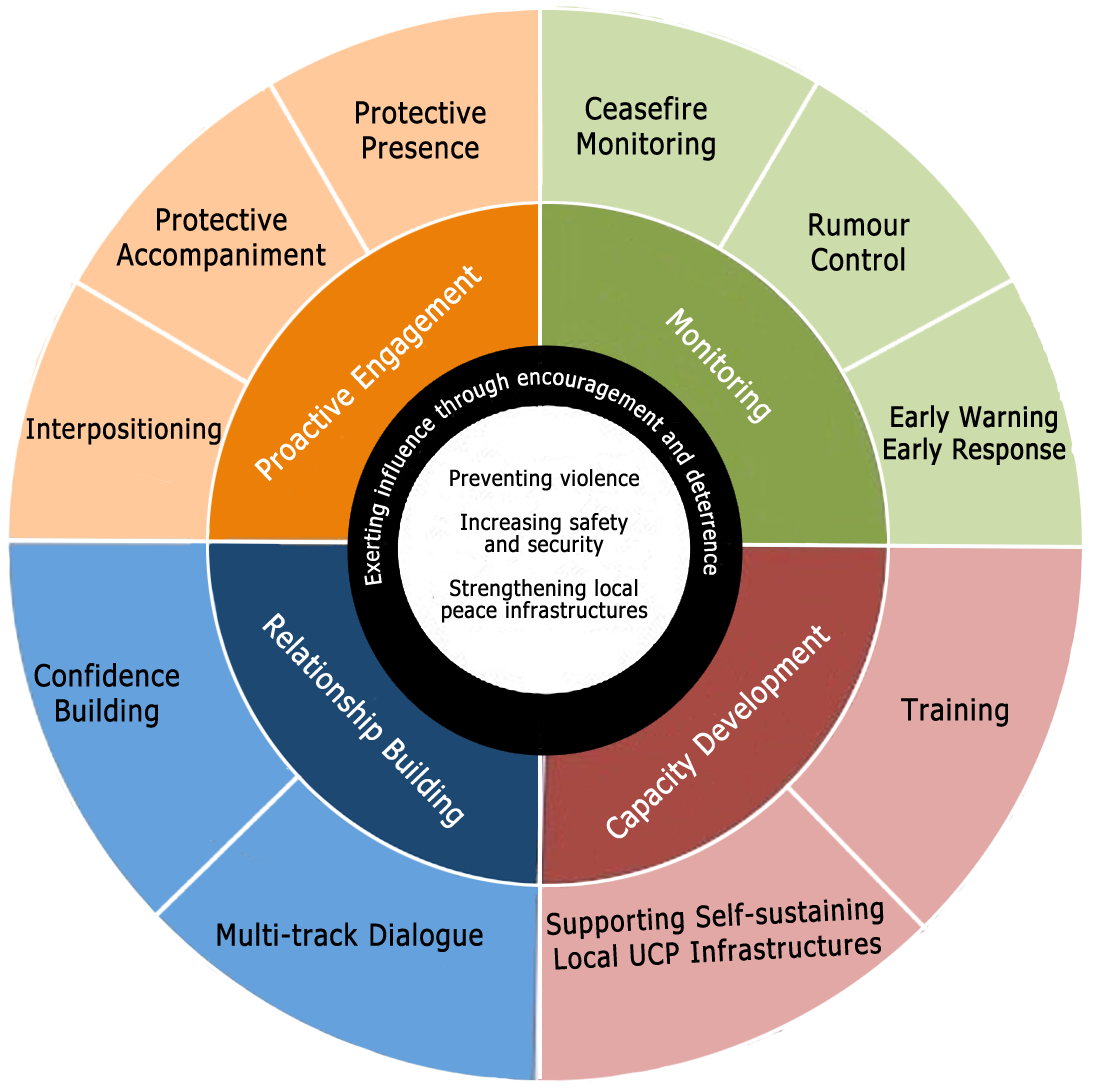 This graph shows the elements of unarmed civilian protection.

Although organizations implement UCP in a variety of ways, the approaches usually share four key methods. Civilian protectors engage proactively, e.g., by providing protective accompaniment; they monitor, as in the case of ceasefires or escalating tensions; they build relationships, e.g., through local mediation; and they develop local capacity across these other areas. They also share a commitment to non-violence and non-partisanship; an emphasis on key sources of guidance such as international humanitarian law; and employing key skills such as humanitarian negotiating.

UCP methods are selected on a case-by-case basis, depending on the specific needs of the local population, the type of conflict and context, and the mandate and capacity of the implementing organization. This means UCP may look different in each deployment.

In conjunction with a range of other international groups, UCP methods have been pioneered, developed, and refined by civil society organizations such as NP, Cure Violence, Peace Brigades International, and The World Council of Churches Ecumenical Accompaniment Project in Israel and Palestine.

In light of the changing nature of conflicts and human rights abuses, evolving peacekeeping mandates, and the vast unmet need for protecting civilians and preventing violence, the UN could look to formally recognize, support, and employ UCP. This would facilitate more sustainable funding and a greater emergency response capacity. New partnerships could be forged, and existing ones strengthened, such as those with the UN High Commissioner for Refugees and the UN Development Programme.

UCP is by no means a perfect instrument. It is not always the right tool for every situation, particularly if armed groups are purposely targeting international civilians. It can, however, be highly effective in many circumstances. It is an option that can be used in coordination with UN interventions, or when UN intervention is not forthcoming. If creative and effective approaches such as these could be advanced and expanded, the evidence suggests it would help prevent escalation of violent conflicts and protect those already under threat.

Mel Duncan is a Founding Director, Rolf Carriere is a Board Member, and Huibert Oldenhuis is a Trainer, for Nonviolent Peaceforce.