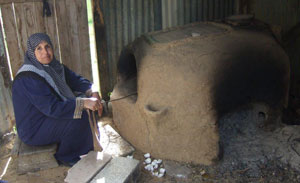 A woman cooks using an old stone stove that previously had sat unused in the shed. Electricity is often cut in Gaza, forcing people to adapt. (Mona Christophersen)

As the John Kerry-led round of Palestinian-Israeli negotiations approached the finishing line in April, the world was taken by surprise when Fatah and Hamas announced an agreement for reconciliation. Much of the subsequent attention has focused on how this might affect relations with Israel and prospects for financial aid from the United States and Europe; however, this analysis will focus on how this agreement will affect the people living in Gaza.

After Hamas’ bloody takeover of Gaza in 2007, Israel put this strip of land on the edge of the Mediterranean under a tight blockade, hoping that Gazans would revolt against the Hamas regime. Instead, smart business people, with the Hamas leaders’ blessing, built a sophisticated network of tunnels under the border with Egypt. For years, these tunnels supplied Gaza with most of its basic needs, and at a cheaper price than goods previously coming via Israel; some reports claim 1,200 tunnels have been in operation since 2008. Most have collapsed or stopped functioning, but the last 220 tunnels were operational until the fall of Morsi’s Muslim Brotherhood government in Egypt last summer.

Initially, the 2012 election of the Muslim Brotherhood government improved the situation in Gaza further. Because of the close connections between Egypt’s Muslim Brotherhood and the Palestinian Hamas, borders were opened, and both people and goods traveled back and forth more freely than in a long time (the border had been mostly closed since 2007). The joy was short lived, however, as the Morsi government was overthrown in a military coup d’état in July 2013. The immediate effect on Gaza was the closing of the Rafah crossing and the destruction of most smuggling tunnels. Egypt’s military government linked Gaza militants to terrorist groups in Sinai and claimed that the Gaza tunnels were destabilizing Egypt, legitimizing why the tunnels had to be destroyed.

With this turn of events, many people in Gaza feared that the efficiency of the Israeli blockade could lead to a humanitarian crisis similar to what happened in 2007. At that time, all borders crossings in and out of Gaza were closed, and the tunnel business had yet not started. Today, Israel is permitting food and other basic needs to enter Gaza, but restricts raw material for Gaza’s local industries as well as all kinds of building material. Israel is allowing fuel into Gaza, but the price is double of what they used to get from Egypt. The combination of restrictions and increased prices has had a dramatic effect on Gaza’s economy. Many businesses in Gaza have had to shut down, and, in combination with the demolition of the tunnel business, many income-generating opportunities have been lost.

Through Fafo, a research foundation in Norway, we recently interviewed a number of those affected, including Mr. Marwan, who owns a small brick factory in Gaza with 15 employees. During the blockade in 2007, Mr. Marwan was forced to close the entire factory. When the tunnel business brought in some raw materials from Egypt, he was able to re-open his factory, although with a reduced and unstable capacity. By 2010, only half of his staff had been rehired. After the fall of the Muslim Brotherhood in Egypt in June 2013, he once more had to lay off his workers. He received a limited amount of raw materials from the Israeli quota, which allowed him to operate about ten percent of previous capacity, but after the Israeli government discovered a tunnel from Gaza to Israel in October 2013, the supply stopped completely. Gaza’s economic conditions have deteriorated to unprecedented levels, with a general poverty rate of 39 percent; 21 percent live in extreme poverty. Unemployment has passed 40 percent, with a loss of 170,000 jobs across all sectors.

The construction sector in Gaza was almost 100-percent dependent on construction materials from Egypt via the tunnels once Israel imposed its blockade. The decline in the construction sector has dramatic consequences for the population in Gaza because of rapid population growth. The Ministry of Housing estimates that Gaza needs 13,000 new housing units yearly. This means that job losses are not only directly linked to the closed tunnel business, but have implications for jobs in sectors such as construction and manufacturing.

The electricity supply for Gaza is based on generators that use imported fuel. Israel did not only restrict the import of construction materials, but also limited fuel imports, leading to severe electricity shortages in Gaza. The tunnel business partly compensated for this shortage, and Gaza was heavily dependent on cheap Egyptian fuel to provide electricity to its people. Due to fuel shortage after the fall of Egypt’s Morsi government, the Gaza power plant had to reduce its power production. Gaza residents had become accustomed to only 16 hours of electricity supply daily; now they are lucky to get supply for a few hours per day. This has consequences for hospitals and schools, and for water and sanitation facilities, with implications for public health and the environment.

In fact, there are implications for every sector. The transportation sector, for example, is highly dependent on fuel. After Israel’s closure policies forced Gazans working in Israel to lose their jobs, the transportation sector was often the only place to find work. However, the Israeli fuel available in Gaza now is double the price it was when it came from Egypt, making taxi driving no longer sustainable for many. The consequence is fewer taxies on the street and long queues of passengers waiting to find transportation.

These economic and political challenges have put the Hamas leaders in Gaza under pressure. They have not only lost support from a Muslim Brotherhood that fell from power in Egypt, but also lost their main source of income— tax revenues from the tunnel business. It is estimated that the Hamas government received 70 percent of their budget from a tunnel tax—approximately $365 million/year. This lack of income is limiting Hamas’ ability to pay government salaries on a regular basis. To find alternative income, Hamas has tried to improve relations with Iran, which were severed because Hamas supported the opposition in Syria, while Iran supports the regime. As a result, Iran cut their economic support to Hamas, estimated to be around $23 million/month. After a two-year deadlock, and with some mediation by Qatar, the relations between Hamas and Iran are slowly thawing; the economic transfers, however, are not yet up to pre-Syria war levels.

Another major challenge for Hamas in Gaza is dwindling popular support. The people of Gaza have not seen the reforms promised by Hamas during the elections in 2006. On the contrary, the economic situation for most has deteriorated, and Hamas has worsened it by implementing new taxes. Many voted for Hamas as a reaction against corrupt Fatah leaders, but they are now seeing corruption among Hamas leaders. Resentment has also developed against the regime because it prefers to hire Hamas members, making it almost impossible for others to find jobs.

It was against this backdrop that Hamas finally reached out to Fatah and agreed to a reconciliation process after years of negotiation. Does this fit in with a broader process of moderation across the Islamic movement? The argument frequently heard is that more democracy creates more moderate Islamists, while repression and closed opportunities lead to radicalism. Yet in the recent book Temptations of Power by Shadi Hamid, the author argues that, contrary to common assumptions, Islamists do not moderate when they are democratically chosen to hold power. Hamid argues that experiences from Egypt and Jordan show that Islamists have moderated under repression, but, when in power, have taken bolder actions to implement their goals of an Islamic society based on sharia law. In Gaza, it was only when Hamas was hard pressed on several fronts that they seriously moderated their policies and sought reconciliation with Fatah.

For many people in Gaza, the reconciliation is a welcome development. Mr. Marwan, the factory owner, says that his main hope for the reconciliation is that the borders will open so he can restart his factory and improve his and his staff’s economic situation. He is less concerned about the political outcome and whether it is Hamas or Fatah that will govern Gaza. Many Gazans Fafo spoke to are hoping the reconciliation will improve their living condition. They spoke about general problems in Gaza, such as the electricity outages, unemployment, and poverty. Additionally, each of them had something specific they would like to see improved. Muhammad, 43 years old, opened a supermarket last year, and already his customers owe him $4,500 in shop credits—he hopes the reconciliation will improve his customers’ purchasing power so they can repay their debts. Ali, 27, is one of thousands of university graduates that are unemployed; he hopes to find work, but is not very optimistic. Fadi, 28, has been luckier; he works as a teacher. However, because of the lack of building materials, he has not been able to finish building his home—a prerequisite to getting married. His hope is that the border will open and allow in construction materials so he can get married. Basel, 58, simply hopes his sons can find jobs.

Despite the formation of a technocratic unity government, many are skeptical that the reconciliation process will succeed. There are many obstacles, and the recent scuffle over salaries between Fatah and Hamas public employees are just the start of a difficult process. Regardless, for most people in Gaza, the reconciliation and its expected positive outcomes are much more important than the failed peace process with Israel. After more than 20 years of futile negotiations, there is mostly pessimism related to finding a durable solution to end the conflict with Israel. People are more concerned about their daily challenges, small and large, and hope the reconciliation will improve their daily life.