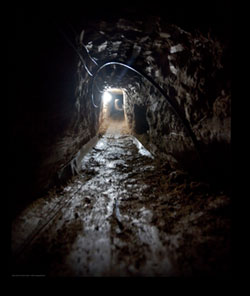 There is a feeling of trepidation in the Gaza Strip these days, and since the Muslim Brotherhood—Hamas’ fellow journeyers—were ousted from power in Egypt in early July, living conditions have deteriorated dramatically. The new rulers of Egypt have launched a much-vaunted campaign against armed groups in the Sinai Peninsula and against the tunnels that connect that territory with Gaza. The latter has brought life in this tiny strip of land where 1.6 million Palestinians live—most of them in refugee camps—to almost a standstill.

Since Hamas won the Palestinian elections in 2006, the Gaza Strip has been under a strict siege. Until last month’s military intervention in Egypt, the Islamic Resistance Movement—branded a terrorist organization by the United States, the European Union, and Israel—was able to undermine this blockade by smuggling a myriad of products, including food, medicine, weapons, and even people, into the Gaza Strip. The two most important benefits of the tunnels were the flow of cheap fuel and other goods, and the taxes that Hamas raised from this.

And this is not the only source of income that the movement has lost in recent times; relations with its traditional donors have also suffered a serious shake up. Hamas has broken away from Syria, which also affects their relations with Iran, a country with problems of its own, financial and other. Also, Qatar, which is financing major infrastructure projects in Gaza, is having to rethink its main foreign policy outlines.

The halt in the movement of people and goods through the tunnels has put the Hamas government in serious trouble, and is fundamentally disrupting the lives of every inhabitant in this territory. Prices of petrol have doubled, and motor vehicles use has reduced to a minimum. The power outages that are part of everyday life in Gaza since Hamas came to power—on and off for about half the day—are made worse by the scarcity of petrol needed to feed the generators that many houses and shops depend on as a back up. The flow of water relies on pumps that run on petrol, and is therefore intermittent. That water is, in any case, undrinkable, since the aquifers have been so corrupted by the sea that locals rely on filtered water that they purchase on the street and carry home in jerry cans. The stuff coming out of the pipes is so salty that it is barely usable to shower, clean clothes, or do the dishes.

As the lives of the people in Gaza steadily regress to pre-industrial conditions, tensions with Gaza’s neighbors have risen worryingly. Last week, the Egyptian army openly accused Hamas of being in cahoots with armed elements in Sinai. These charges are not taken lightly in Gaza, where there is widespread speculation of a possible Egyptian attack. Unlikely as this is—an attack by an Arab country against Palestinians in the occupied territories would be unprecedented historically, not to mention the fact that it would be an aggression against a territory under Israeli control—Hamas’ military outfits have been carrying out exercises in public spaces in a show of defiance. Men dressed in balaclavas and military fatigues could be seen late at night jogging in formation through city streets to the rhythm of pace-keeping military chants.

Hamas political leaders have persistently denied any involvement in the Sinai and are desperate to reduce tensions with their neighbor. “At this moment, Gaza has to be like a sponge,” said Wesam Afifah, the editor-in-chief of Al-Risalah, a Hamas-affiliated newspaper based in Gaza, in reference to the accusations coming from Egypt. This is because it is only through Egypt that Gaza—an incomparably weaker territory—has been able to get some sort of reprieve from the siege. However, appeasing Egypt’s new rulers is a hard pill to swallow for Hamas, which saw the electoral victory of the Muslim Brotherhood’s Mohammed Morsi more than a year ago as its own, and has mourned his ousting as a form of treachery. On the day of the Egyptian elections in May 2012, Al-Risalah opened with the head of the Hamas government, Ismail Haniyah, stating, “the Egyptian elections will determine the [Palestinian] question and establish the position of the Islamic nation in the map of the world.”

Today, this quote sounds woefully naïve, as these hopes appear to have been ruthlessly dashed. Hamas sees in the Muslim Brotherhood its ideological progenitor. The symbol of a hand with all fingers but the thumb stretched out against a yellow background—first used in the Rabi’a Al-Adawiyah, the encampment in Cairo where the Muslim Brotherhood made a final stance last August 14—figures prominently in the streets of Gaza, and almost covers entire walls. Hamas, however, has little other choice than to let go of its pride.

Anti-Muslim Brotherhood Egyptian media, particularly television, has in fact led an aggressive campaign against the Gaza Strip and Hamas for more than a year. This has raised anti-Palestinian sentiment in Egypt to a feverish pitch and many Palestinians residing or visiting the country have rushed to leave. Abu Mahmud, a 30-year-old from Jabalia, in the north of the Gaza Strip, has interrupted his pre-doctoral studies in Cairo’s Al-Azhar University and is thinking of transferring to another institution, possibly in Lebanon. Another, who left Egypt in the past week, said that when asked about his origin by Egyptians, he would lie and mention Jerusalem or the West Bank rather than Gaza. He does, however, plan to continue with his Ph.D. and travel back whenever necessary, hoping that further down the line spirits will have cooled down somewhat.

Though Egypt has the capacity to make life unbearable for Gazans, an armed conflict is more likely to take place with Israel, which has after all been the constant, year in, year out, since the beginning of the second intifada until today. In recent years, and since Hamas took over the strip in 2006 in particular, violence between Israel and Gaza has flared up as militant groups have fired homemade rockets against Israel in response to a heightened sense of suffocation, which in turn has often provoked an overwhelming and deadly response from their neighbor.

For the most part, unable to leave the strip except through death, the population of Gaza is painfully aware of their terrible predicament. Regardless of who is actually responsible for the closure that is making their lives miserable, some are already wondering out loud whether Hamas is good for this territory. However, even if this was anywhere near a critical mass, Hamas still has too strong a hold of the territory to allow for any alternative to arise or even impose itself.

The situation in Gaza has rarely looked so bleak, and it is difficult to imagine it could get better anytime soon. The two most likely scenarios that would forestall the looming disaster—reconciliation with the West Bank’s Palestinian Authority or between Egypt’s military and the Muslim Brotherhood—are, as the saying goes in Gaza, film hindi—an Indian film; that is, sheer fantasy. At least for now.