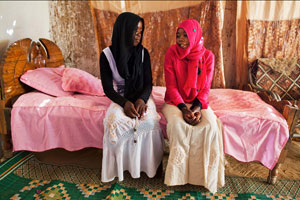 Sisters Nana (16 years old) and Zakia (20, at right) in the Abu Shouk camp for displaced people in Darfur, Sudan. Nana was married at 13, and Zakia at 17. (Albert González Farran/UNAMID)

In Iraq, a draft law tabled in the Parliament this week would legalize marriage for nine-year-old girls. In Jordan, Syrian refugees are increasingly pressing their daughters into early marriage—for the economic survival of the family, or with the belief that it might protect their daughters from sexual assault. In Yemen, child marriage captured the spotlight last September when an eight-year-old girl died from internal bleeding on the night of her wedding to a man five times her age.

In the Middle East and beyond, girls in countries experiencing conflict, instability, or humanitarian crises are most vulnerable to early marriage. While families often perceive early marriage as a protective response in times of crises, its underlying drivers include poverty, weak legal frameworks, gender discrimination, and harmful traditional practices.

Parents often fail to recognize the implications of an early marriage for their daughters, who are left vulnerable to domestic-based violence and often life-threatening adolescent labor. For society at large, the consequences extend far beyond the child’s physical insecurity: one of the strongest indicators of state security across the globe lies in a state’s treatment of its women and girls. Where women gain more political power and attempt to reverse structural inequalities that threaten their physical security, this could also improve peace and stability writ large.

Yemen, which is ranked as the poorest and most fragile state in the Arab region, could present an interesting case in this respect. Fifty-two percent of women are married before the age of 18 in Yemen, and 14 percent before the age of 15. Efforts to set the minimum age for marriage at 17 years were blocked by the Parliament in 2009. Hardline Islamic conservatives, whose influence grew significantly in Yemen over the past two decades, contended that setting a minimum age for marriage would be contrary to sharia law. At the same time, most child marriages in Yemen happen in rural areas with low literacy rates and high levels of poverty, where tradition and custom are often more powerful than the laws of the state.

But a shift in gender relations following the 2011 Yemeni uprising could have a profound effect on child marriage. Despite Yemen’s traditional conservatism, women led the Yemeni revolution alongside men, toppling the country’s 33-year-old authoritarian regime in a bid to reclaim their human rights. The level of women’s mobilization, participation in public demonstrations, and expression of independent political views was unprecedented. When the president publicly called women’s participation in the demonstrations “un-Islamic,” they continued to flock to the streets in the thousands.

In some cases, this created a blend of old and new ideologies. For example, the Islamic conservative political party, al-Islah, called on their women supporters to join the public demonstrations, while women who joined agreed to respect tradition and sleep in separate sections of street tents throughout the uprising.

One female member of the Islah party, Tawakkul Karman, won the 2011 Nobel Peace Prize for her struggle for women’s rights, democracy, and peace. Yemeni women rose to prominence on the international stage, and women’s political participation was increasingly viewed with respect.

In light of their role in the uprising, women were also granted a role in the transitional process that followed. After the Gulf Cooperation Council (GCC) brokered a deal that saw the departure of Yemen’s entrenched president Ali Abdullah Saleh, a 30-percent quota was set for women participants in the National Dialogue that would propose the tenets of a new Yemeni constitution.

The dialogue lasted nearly a year, and women made up 22 percent of participants in practice. In its final report, the Rights and Freedoms Working Group, which was chaired by a woman and in which 45 percent of the delegates were women, proposed setting a minimum age for marriage at 18 years—a significant acknowledgement of the plight of girls forced into child marriage.

While considerable efforts will still be required to now get this kind of legislation passed and to transform the landscape of child marriage in society, the shift in gender relations during the revolution and the opening up of the political process thereafter have allowed for this crucial first step. And over the past year, amid newfound political power for women, momentum has been building (reported also here and here).

For policymakers concerned with Yemen’s security, capitalizing on this momentum could also offer some relatively low-hanging fruit. Half of Yemen’s population lives on less than $2 a day, democracy will take a long time to build, and religious extremists are likely to remain in the picture for the foreseeable future. But if there’s any truth to the statistics, it’s not wealth, democracy, or religious identity that makes the strongest predictor of a society’s peacefulness—it’s how well women are treated. So where better a place to start than with girls?