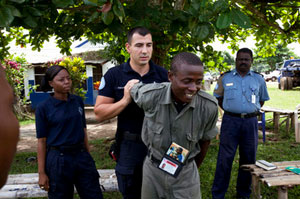 Sectarian violence in the Central African Republic (CAR) has left at least 2,000 dead and over 700,000 displaced since December last year. The United Nations is now preparing to deploy a major peacekeeping mission to CAR, in which the UN police will play a critical role in deterring further attacks on civilians, restoring order, and rebuilding local police and gendarmerie as part of the effort to re-establish the wider rule of law. How United Nations police will stabilize and help to rebuild CAR and other conflict-torn countries such as Mali and South Sudan will be the subject of a major international meeting in Oslo this week, March 19-21.

Convened by the Police Division in the UN Department of Peacekeeping Operations, police and government representatives from over 50 UN member states as well as international and regional organizations will discuss how international police can contribute to developing police institutions in the conflict-torn countries where peacekeeping missions are deployed. The meeting will aim to further flesh out specific areas outlined in the first comprehensive Policy on UN Police in Peacekeeping Operations and Special Political Missions, which formally took effect on February 1, 2014, after more than 5 years in development.

Although peacekeeping operations are still widely perceived as military affairs, the reality is that over time they have become progressively more complex and ambitious. The role of police in peace operations has concurrently undergone a quiet but highly significant shift. Today, international police are essential for stabilization and, along with civilian experts, critical for peacebuilding and statebuilding in conflict-affected states hosting a peacekeeping mission.

International police taking part in peacekeeping missions provide technical and operational support to the host state police, assisting them to perform core public order and law enforcement functions. A recent development is the deployment of teams of specialized policing experts, such as the current Norwegian-Canadian team training Haitian police counterparts and trainers in investigating cases of domestic violence and sexual assaults, and providing logistical support for developing proper facilities in Haitian police stations to treat victims of sexual and gender-based violence.

International police provide reassurance and an increased sense of security to local populations through their physical presence and by conducting patrols, whether on their own or with host state police. They may also provide protection for civilians in camps for internally displaced persons. International police contribute to the reform, restructuring, and rebuilding of host state police and law enforcement agencies, through the provision of material support and infrastructure such as the refurbishment of police stations, and through the transfer of knowledge via training, monitoring, mentoring, and advising their host state police counterparts on policing functions, development of specialist skills, and the coaching of police leaders.

However, there are considerable challenges in creating guidelines that will be relevant and useful for police peacekeepers who are helping to reform, restructure, and rebuild host state police and law enforcement agencies. Over 80 countries currently contribute police to UN peacekeeping missions around the world, and each brings a distinct national ethos, culture and method of policing, including an interpretation of the respect for human rights. The UN is seeking to identify international standards in international policing that can be used to prepare police contributing countries’ officers and prevent future host states from being confronted by diverse and sometimes contradictory approaches with each successive rotation of international police.

The UN also acknowledges that police development must only be done with the involvement of local stakeholders, in partnership with the host state authorities and populations. Only in this way can local ownership be created, which is crucial regarding sustainability of the reforms. One of the most fundamental challenges faced by police peacekeepers, as with other actors who seek to support development in conflict-affected states, is to ensure that their actions are based on a thorough understanding of the local context, and are demand-driven, responding first and foremost to the security and justice needs of local populations and police in the host state. Further, reforming police is as political as it is technical, and requires sensitivity to the political context when institutional reform is undertaken.

Police were first used in a UN peace operation in 1960. However few police participated in early peacekeeping operations, playing a minor and passive role in which they largely observed, monitored and reported on host state police. Following the end of the Cold War, the eruption of internal conflicts spurred a rapid increase in demand for peacekeeping missions, and particularly for police peacekeepers. Whereas in 1988 some 35 civilian police were deployed in Cyprus, by 1994 there were 1,667 UN civilian police deployed on international missions. This number had more than tripled to 5,840 UN police deployed in 2000. The most recent UN figures indicate that over 13,000 international police from 87 countries were deployed in February 2014 on 15 UN peacekeeping missions alone, not including those deployed on missions headed by regional organizations such as the European Union and African Union.

Traditional peacekeeping functioned as an interpositional force that monitored a ceasefire agreement between states. However, with the major geopolitical changes resulting from the end of the Cold War bipolar division of power, peacekeeping missions through the 1990s arose in response to the outbreak of violent intra-state conflict and civil wars, and were asked to help ensure the implementation of comprehensive peace agreements and to fulfil functions relating to the creation of a durable peace, including reconstruction of state institutions and systems of governance. And as the demand for and numbers of police in peacekeeping operations rapidly grew, there was a simultaneous shift in the roles they were asked to perform. International police were required to contribute both to providing operational support to fragile host states in maintaining order as peacekeepers—and as peacebuilders—to reforming or rebuilding the host state police, often from the ground up.

The UN has struggled to keep up with the surge in demand for international police peacekeepers and the shift away from simple monitoring towards the far more complex tasks they now perform. Lack of an overarching police policy and detailed guidance for UN police peacekeepers resulted in a situation where each mission was in a position of reinventing the wheel when deployed to a conflict-affected state and tasked with reconstituting police and the rule of law. The lack of guidance was compounded by the fact that few police services have experts on international police development. Moreover, the extreme diversity of policing systems around the world has underscored the need for clear guidance on UN norms, procedures, and standards.

The Oslo meeting marks the beginning of the second phase of the development of detailed guidance for UN police peacekeepers. Its organizers hope that the outcome will contribute in the future towards more effective peacekeeping efforts in fragile settings such as CAR, where UN police will likely be tasked with protecting civilians, providing operational support, re-establishing law and order, and assisting in rebuilding effective policing and justice systems.

However, there are difficult challenges that those attempting to develop guidance for police peacekeepers will encounter in seeking to address the complex issues involved in facilitating institutional reform. Most critically, UN police must recall that, if reform is to be meaningful and sustainable, it must reflect the actual security and justice needs and preferences of local populations. Developing specific guidance for the wide range of complex tasks police peacekeepers are now asked to perform in assisting fragile states recover from conflict is both necessary and long overdue, but is not likely to be easy.