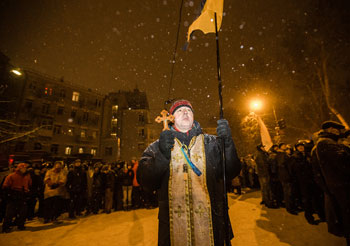 With the political crisis in Ukraine, the European Union (EU) is facing the biggest security challenge to its borders since the 1990s, when the former Yugoslavia broke apart with a series of brutal wars. Yet surprisingly, the EU has been slow to react, and many EU members continue to remain passive, preferring to follow behind the United States in fashioning their policy. But how the EU responds to this crisis is critical to a peaceful resolution.

Ukraine has experienced acute crises every decade since 1994, usually around presidential elections, and in 1994 and 2004, the country was heavily divided between candidates supported by eastern and western Ukrainians. In 2004, Europe looked very different; the EU and NATO had undertaken the biggest expansions in their histories. Ukraine was different, too; its economy was growing by 12 per cent, and the Orange Revolution (sparked by election fraud) was free of violence despite seventeen days of mass protests. In that instance, the EU stepped in as a mediator, and Ukraine’s ruling elites and opposition supported a negotiated compromise.

How times have changed. And now, Ukraine’s current crisis is deeper, and more bitter, for six reasons.

First is the cause. The current crisis was sparked by the government’s decision in late November 2013 to turn away from signing an Association Agreement with the EU that Ukraine had been negotiating since 2008. The crises in 1994 and 2004 took place around elections, whereas elections were still eighteen months away when the current crisis began.

Second, although turning away from Europe was the spark, there are at least three other underlying factors that make this crisis more bitter, and which have led to violence: democratic regression; attacks on Ukrainian national identity and the Ukrainian language; and rapacious corruption that has led to depictions of Ukraine as a “mafia state.” These factors brought together a broad coalition of students, civic NGOs and activists, middle class businesspersons, democratic opposition leaders, and nationalists, which produced a combustible mix and a powerful coalition.

With the passing of the Ukrainian anti-protest laws on Black Thursday (January 16, 2014)—essentially destroying Ukraine’s democracy—a second spark was ignited, and the crisis turned violent. During the Orange Revolution, not a single incident of violence took place, whereas in the current crisis, there are seven dead, 2,000 protesters wounded, 136 journalists and 20 volunteer medical workers  attacked, 30 protesters kidnapped—with only a few found after being tortured—and 120 people detained. Amnesty International described the torture and crucifixion of Automobile-Maydan leader Dmytro Bulatov “a barbaric act” (he is undergoing treatment in Lithuania). None of these acts of violence have been investigated; instead, the authorities have resorted to excuses and lies. Before the recent violence, the use of firearms against protesters had not taken place since the Soviet era, and yet President Viktor Yanukovych refuses to replace Police Chief Vitaliy Zakharchenko for such acts.

Third, the incompetent and corrupt policies of the government headed by Party of Regions leader Nikolai Azarov brought the country to bankruptcy by the end of last year. Foreign assistance to stave off this calamity was imperative and could only come from China, the EU and International Monetary Fund (IMF), or Russia. President Yanukovych opted for Russian aid because there were fewer strings attached, and this path was most conducive to his re-election in March 2015.

Or, so he thought. Yanukovych’s chances for re-election are now impossible, most importantly because, in exercising a monopoly of power under a presidential system, he holds responsibility for the violence and therefore has blood on his hands in the eyes of Ukrainian voters.

Fourth, in 1994 and 2004, eastern and western Ukrainian candidates competed against each other and thus deepened regional divisions, whereas today, the fault line is between the Ukrainian people and a kleptocratic and violent regime. Protests have spread to the majority of Ukraine’s regions, including the heartland of Yanukovych’s support base in Russophone eastern-southern Ukraine. The president has lost control of half the country and has been only able to maintain control in his home base by virtue of the police working alongside sportsmen-skinhead vigilantes. Videos on YouTube provide damning evidence of detained vigilantes in Kyiv who had been given narcotics, metal pipes, and explosives, and in the Dnipropetrovsk governor’s office where they were given baseball bats before being unleashed on protesters.

Fifth, the international environment is very different from 2004, with the US and EU now preoccupied with internal problems and distracted by strategic priorities in the Middle East and Iran. Not only is the EU less keen to become a mediator (as it did in 2004), but the more autocratic and thuggish Ukrainian ruling elites are less willing to seek compromise. In 2004, outgoing President Leonid Kuchma was leaving office after two terms and had little to fear; in contrast, Yanukovych and “The Family,” as his clan from his home region in Donetsk have been dubbed, have always been afraid to cede power, and are even more so today.

Finally, Russian President Vladimir Putin is in a more aggressive mood than he was in 2004. Putin seeks revenge for his personal humiliation in the Orange Revolution when his candidate (Yanukovych) was defeated. He—like most Russians—does not view Ukraine as a sovereign country, and, in his mind, the protests are setting a bad example that could lead to the toppling of other Eurasian autocrats. He also sees Ukraine as key to the building of his Eurasian Union (just as Ukraine’s secession from the USSR in August 1991 was key to the disintegration of the USSR).  Russia will use its three pressure points of the separatist card in the Crimea and Donetsk, which would be far more of a threat to European security than the 2008 Georgian-Russian war; energy cut offs (as in 2006 and 2009); and trade boycott.

Ukraine’s crisis will not be resolved by Ukrainians acting alone, and a peaceful resolution can only be brought about by international mediation. Canada could act as an honest broker in league with the Organization for Security and Co-operation in Europe (OSCE), while the EU and US are beginning to develop an assistance package for a post-Yanukovych administration. Targeted sanctions and visa blacklists for Ukrainian officials and oligarchs are imperative to send a signal that murder and torture are not tolerated in Europe as well as to facilitate pressure from oligarchs upon the authorities to seek a peaceful outcome. The US and Canada have led the way in these sanctions; it is now time for the EU to follow suit.