When the United Nations (UN) General Assembly voted overwhelmingly to oppose Russia’s invasion of Ukraine on March 2, 2022, the African vote split right down the middle. Of the 54-member strong bloc, 28 voted for the resolution, 26 abstained or absented themselves, while Eritrea stood solidly with Russia. For all intents and purposes, 28 African states were in favor, and 26 were against the resolution.

The vote must have sent shivers down the African Union’s spine. The organization aims to make Africa speak with one voice on the global stage. Yet, the African voice fragmented precisely at the moment when “multilateralism lies on its death bed,” as Kenya’s Ambassador to the UN put it.

How do we explain this lack of unity in the African bloc, and what accounts for its reluctance to stand firm against Russia’s aggression? Is it an illustration of Russia’s increasing power on the continent, reflecting its expanding military and economic alliances with African states? Or is it a historical legacy, harking back to a bygone era of solidarity between the socialist bloc and the Third World against an imperialist West? Or, more idealistically, but still with reference to the Cold War era, is it an expression of non-alignment, a refusal to take the side of either of the old superpowers and instead chart an independent path to peace and security, perhaps closer to China as an emerging global power? 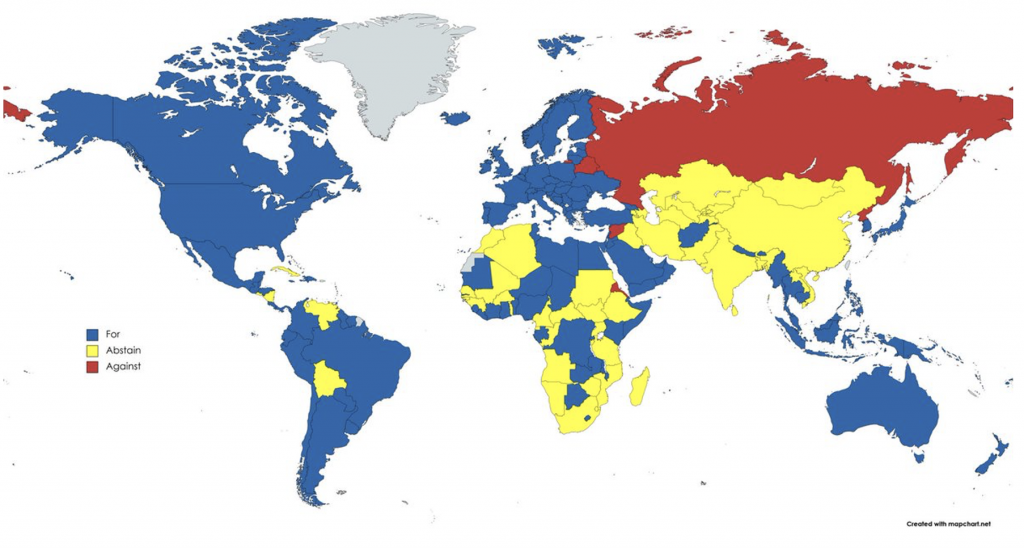 The explanations given so far from the various countries that abstained or absented themselves do not stand up to scrutiny. South Africa issued a bland statement in defense of its abstention, arguing that the resolution was not conducive to “diplomacy, dialogue and mediation.” The insistence that South Africa remains committed to international law and human rights took a further beating when the government told South African science agencies not to comment on the conflict between Russia and Ukraine. Uganda justified its abstention by saying that it valued neutrality before taking over as Chair of the Non-Aligned Movement. The strident tweets of the President’s son, the powerful Lt Gen Muhoozi Kainerugaba, cast doubts on this claim to neutrality: “The majority of mankind (that are non-white) support Russia’s stand in Ukraine.” For good measure, he added, “Putin is absolutely right!” Ethiopia, which did not turn up for the vote, released a bizarre statement expressing concern for the situation in Europe, without a single mention of Russia.

Non-alignment is a proud tradition of many African countries, and the 1955 Bandung conference marked a pivotal moment in the continent’s international relations. But non-alignment never meant not taking sides in the face of aggression and oppression. As the late Archbishop Desmond Tutu frequently reminded us, to be neutral in situations of oppression is, in effect, to choose the side of the oppressor. As for the historical ties, it is true that the USSR was a strong and loyal supporter of Africa in the fight against colonialism and apartheid, but the Russia of today is a far cry from the Soviet Union that supported liberation struggles in Namibia, Angola, or Mozambique.

Today’s Russia is building military relationships through the use of the mercenary Wagner Group, offering weapons and military services in return for minerals—and possibly votes in the UN. Many of the countries that abstained or did not turn up to vote have extensive military alliances with Russia and the Wagner Group, including Burkina Faso, the Central African Republic, Mali, Mozambique, Sudan, and South Sudan.

Defenders of the abstentions and absentees point to the double standards of western governments and media, denouncing US imperialism, NATO expansion, and the much greater attention paid to Ukraine compared to conflicts in the Global South. There is also legitimate outrage at the bigotry and racial slurs in some of the reporting, as well as the undeniable racism encountered by Africans fleeing the war. All of this is true, but opposition to Western imperialism and racism does not justify support for Russian imperialism and oppression.

In 1969 at the height of the Cold War, Julius Nyerere, the great Pan-Africanist and President of Tanzania, lamented that Africa’s actions were always looked upon with suspicion and judged in the light of big power conflict: “The big question is always: Is this country pro-East or pro-West?” These kinds of views, he charged, “are based on a very fundamental mistake—and I would add, an unwarranted degree of arrogance! They imply that Africa has no ideas of its own and no interests of its own.” The target of Nyerere’s criticism was the West’s failure to support the liberation struggles in Southern Africa, mistakenly reducing them to Cold War logics and failing to understand that the common objective of African people is “self-determination… the right of a man to stand upright as a human being in his own country.”

At the end of the speech, delivered at the University of Toronto, Nyerere asked, “Will Canada at least understand that freedom means as much to us in Africa as it does to any other people? And, if Canada cannot support our struggle, will it at least be able to refrain from giving comfort and help to those who would deny freedom and dignity to us?”

After the vote in the General Assembly, Nyerere’s questions should be posed to the African states that abstained or absented themselves. Why is Ukraine’s right to self-determination and freedom not worthy of support? Why give comfort and help to those who deny Ukraine’s freedom?

When joining the UN as newly independent nations, the African bloc made the fight against imperialism its key objective. Then and now, Africa’s own interest, as Nyerere well recognized, lies in support for self-determination, international law, and multilateral cooperation. To abandon this commitment now is a dangerous strategy. “Stoking the embers of dead empires,” as Kenya’s Ambassador to the UN warned, risks creating “new forms of domination and oppression.” It also risks creating new dependencies, weakening Africa’s ability to speak with a united voice and determine its own path in global affairs.

Rita Abrahamsen is a Professor in the Graduate School of Public and International Affairs and the Director of the Centre for International Policy Studies (CIPS). This analysis was originally published in the CIPS Blog.