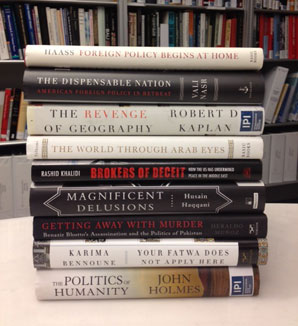 What kind of world emerges in the vision of the authors of the books presented in the nine events hosted by the International Peace Institute (IPI) as part of its 2013 Beyond the Headlines series?

It is a world in which national borders are receding as definers of political and cultural movements; in which the West, and, in particular, the United States, is struggling to maintain influence in the face of growing distrust; and one in which extremism, and the efforts to combat it, distort and undermine entire societies. It is also a world where high profile acts of terror go unaccounted for and unpunished, where Muslim women are rising to leadership and overcoming traditional discrimination, and one in which humanitarian affairs are increasingly the focus of United Nations attention.

Two authors dealt with the perception of declining American leadership and what to do about it. Richard N. Haass, President of the Council on Foreign Relations, recommended “less nation-building abroad, more at home” in his book Foreign Policy Begins at Home. He argued the Mideast is no longer the center of US foreign policy or great power rivalry, and that Asia/Pacific is. Vali Nasr, Dean of the Johns Hopkins School of Advanced International Studies, sounded a cri de coeur for renewed international engagement in his book The Dispensable Nation: American Foreign Policy in Retreat. He deplored what he saw as America’s growing reluctance to provide global leadership and urged a policy less reliant on military means and domestic partisan concerns and centered instead on trade and development and multilateral diplomacy.

Robert D. Kaplan, author of The Revenge of Geography: What the Map Tells Us About Coming Conflicts and the Battle Against Fate gave an IPI audience a tour d’horizon in which he argued that the Sahara should be thought of as beginning at the southern border of Europe, and that North America actually extends down through the Caribbean all the way to the jungles of Venezuela. And Kaplan used geography to forecast which countries in the Middle East and North Africa have the best chance of prospering from the Arab spring uprisings. And which don’t.

The Arab spring was also a focus of a book by Shibley Telhami, the Anwar Sadat Professor for Peace and Development at the University of Maryland and a trailblazing surveyor of Arab public opinion. In The World Through Arab Eyes: Arab Public Opinion and the Reshaping of the Middle East, Telhami said that, during the past decade, access to international media and communications tools such as Facebook and Twitter and other social media have transformed the region into “a massive Arab chatroom.” He also said that while the Palestinian–Israeli conflict is not necessarily the immediate priority in Arabs’ daily lives, it is “the prism of pain through which most Arabs view the world.”

The Palestinian-Israeli conflict was also addressed by Rashid Khalidi, the author of Brokers of Deceit: How the US Has Undermined Peace in the Middle East. Khalidi, the Edward Said Professor of Modern Arab Studies at Columbia University, said his purpose was to show “how in American political discourse, lies about Palestine are made to sound truthful; how crimes against a people and against humanity are made respectable, and how the pure wind of terms like the ‘peace process’ are given the appearance of solidity.”

Husain Haqqani, a former Pakistani ambassador to the US, lamented that his country’s relationship with Washington has become so poisoned that America is the most disliked country in the world among Pakistanis, and Americans view Pakistan as negatively as they do North Korea. His book, Magnificent Delusions: Pakistan, the United States and an Epic History of Misunderstanding says the future association will remain rocky because while the two countries are yoked together by a dependence on one another, “Pakistan and the United States have few shared interests and very different political needs.”

One of the most shocking acts of public terror in recent years was the subject of a talk by Heraldo Muñoz, the Chilean and United Nations diplomat who was tasked by Secretary-General Ban Ki-moon with conducting the UN inquiry into the December 2007 suicide bomb assassination of former Pakistani Prime Minister Benazir Bhutto. The book is called Getting Away with Murder: Benazir Bhutto’s Assassination and the Politics of Pakistan and points up how impunity thrives in a political culture of unconsolidated democracy, corruption, and religious fanaticism.

Karima Bennoune, an Algerian-American human rights lawyer, said she took inspiration in writing her book from a young woman in Karachi who complained, ”The fundamentalists who are killing people are the only ones who are visible. We have not made ourselves visible.” The result is Your Fatwa Does Not Apply Here: Untold Stories from the Fight Against Muslim Fundamentalism, a book based on interviews across 26 countries in the Muslim world that is a powerful rebuke to those in the West who say that moderate and secular Muslims are almost complicit with the violence in their midst by their alleged silence and inaction. And surprising numbers of the people she cites as risking death to combat extremism are women, who represent a particularly bold brand of defiance given the attitudes about women in many of these societies.

And John Holmes, the Undersecretary-General for Humanitarian Affairs and Emergency Relief Coordinator from 2007 to 2010, returned to the UN community to talk to a Beyond the Headlines audience about his book The Politics of Humanity: The Reality of Relief Aid. He wrote the book, he said, because he wanted to show the difficulties and complexities of humanitarian policy and practice, particularly in conflict settings, and to promote better understanding between humanitarians and governments.