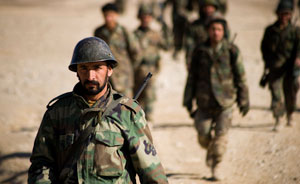 The grim realities and challenges of the continuing conflict in Afghanistan were brought into sharp relief by the mid-year report on the protection of civilians in armed conflict, released by the United Nations Assistance Mission in Afghanistan (UNAMA) on July 31, 2013. It records a 23 percent rise in civilian casualties in the first six months of 2013, in comparison to the same time period in 2012, Women and children have suffered tremendously, with a 61 percent increase in female casualties caused mainly by ground engagements, and 30 percent increase in child casualties. **

This report comes at a time when the international forces are nearing the completion of a total security transfer to Afghan forces, and it provides fodder for the international community’s concerns about the security and stability of the country post-2014.

On June 18, 2013 President Hamid Karzai, along with the NATO Secretary-General Anders Fogh Rasmussen, announced the launch of the fifth and final tranche of transition of security from the NATO-led international forces to the Afghanistan National Security Forces (ANSF). The announcement was made at a ceremony and was considered largely symbolic for the Afghan community and a matter of national pride. Upon completing this phase of the transition, the international security forces in Afghanistan would fall back into support, logistical, and training roles. Though the ceremony itself was largely peaceful, the day was marred by a blast at the Afghanistan Parliament targeting a prominent lawmaker who escaped unharmed.

A month since the final transfer was initiated, the security situation in Afghanistan has received mixed evaluations. Though reports of armed attacks through targeted and roadside bombings within many provinces continued to make news in Afghanistan, reports of successful counterinsurgency operations by the Afghan forces, sometimes operating jointly with international forces, have also been highlighted. Yet, the continued offensive by the anti-government forces, consisting mostly of the Taliban and its allies, poses one of the greatest challenges to the nascent and growing Afghan forces, both military and civilian units.

Apart from the obvious security challenges, many other issues mar the efficiency and credibility of the security forces in Afghanistan. Corruption, widespread in the country, is also institutionalized within the ANSF and found in several military and police units. This raises several difficult questions about the management and administration of these forces. The UN Secretary-General in his latest report to the Security Council (S/2013/350) of June 2013 also notes that high levels of attrition of personnel as well as lack of coordination between security institutions remain major challenges. In addition, personnel who walk away from the security forces are often known to join sides with anti-government forces or other armed groups, resulting in insider attacks against the international and Afghan forces. This is mainly due to the difficulty in vetting recruits, since there is a huge influx of personnel in order to rapidly expand the capacity of the Afghan forces. Further, the monitoring and evaluation team of the 1988 sanctions regime notes in its recent report (S/2012/971) that, in spite of the existing arms embargo against the Taliban and other armed groups that constitute a threat to the peace and security in Afghanistan, some of the Taliban’s weapons are acquired from estranged personnel from the ANSF. These personnel also trade information—including information about the training they receive from the international forces—to anti-government armed groups, thus reducing the efficacy and the capacity of the national security forces.

Though the international forces will stay in Afghanistan to support and train the national security forces, it is unlikely that, by the end of 2014, the ANSF will constitute a formidable force capable of maintaining security and stability within the country, against either external or internal aggressors. The continuing sectarian politics, conflicts within Afghanistan, and the pressures of the upcoming 2014 elections have diverted the attention of Afghan government away from the immediate need for designing and implementing reforms within the ANSF. In fact, it is even questionable if the ANSF has the capacity to support a violence-free election in April 2014. Thus, the report fuels international concerns that Afghanistan’s continuing conflict and instability will again provide a safe cover for international terrorism post-2014.