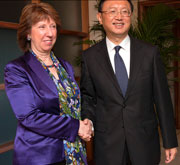 The European Union is working to be a visible and relevant actor on Asian security, and the Association of Southeast Asian Nations’ (ASEAN) Regional Forum in Brunei in June 2013 presents an important opportunity for the EU to take up a sharply profiled and consistent position on the issues. Catherine Ashton, the EU’s High Representative of the Union for Foreign Affairs and Security Policy, plans to attend; she attended the forum for the first time in Phnom Pehn last year, where she signed the Treaty of Amity and Cooperation in Southeast Asia, a non-aggression pact created by ASEAN (Ms. Ashton is also speaking this week at the Shangri-La Dialogue in Singapore).

Shortly before last year’s ASEAN regional forum, the EU released updated guidelines to its foreign and security policy in East Asia. While in Phnom Penh, Ms. Ashton and then US Secretary of State Hillary Clinton issued a joint statement on security and other issues in the Asia Pacific region.

This suggests that the EU wants to closely coordinate its Asia policy with the United States, which has different strategic interests than China, particularly in Southeast Asia. With this in mind, and as regional stability in the southeast further deteriorates, how should the EU proceed?

Southeast Asia’s relevance for global peace and stability has grown rapidly in recent years. This is a consequence of widespread uncertainty about the future of great power relations in Asia. Sino-US relations in particular are currently shaping regional security. Since 2010, territorial disputes between various coastal states in the South China Sea have evolved from being primarily a regional issue to becoming a major element in the Sino-US security relationship. Especially in Southeast Asia the spheres of influence of China and the US are overlapping, and it may be expected that both powers will continue to focus on this region in their efforts to strengthen their overall strategic positions.

The Sino-US relationship is in the middle of a long-term transition, moving from a hierarchical relationship a century ago towards an equal relationship between two global powers. It is getting increasingly difficult for Washington and Beijing to manage this transition, as is shown by the growing tensions between the two great powers. For instance, the emergence of the South China Sea as a major security hotspot is driven primarily by this process. Any country or organization that has close relations with both China and the US has a major interest in a stable relationship between the two. This applies not only to the Southeast Asian countries, but also to a global actor such as the EU.

The EU needs to strengthen its capacity to contribute to stable Sino-US relations, both at the global and the regional level, particularly in Southeast Asia. The EU should make every effort to ensure that US-China relations are firmly embedded in the multilateral governance system, while helping the two  powers to retain confidence in a cooperative approach to international security and economic issues.  At the regional level, the EU should work closely together with ASEAN. As a major global actor that is not involved in regional security issues in East and Southeast Asia, the EU can complement and strengthen the regional role of ASEAN as a stabilizing factor for great power relations.

The European Union should continue to give firm support to regional multilateral security mechanisms, especially the ASEAN Regional Forum. It is crucial that each year, the EU High Representative attends the ARF. Moreover, the EU should use its voice at the ARF to take up a clear and consistent position on issues relating to regional stability. This position should be based on the following two principles. First, coherence among the ASEAN member states is essential in order to prevent Southeast Asia from becoming the stage for a Sino-US power struggle through proxy conflict. Given the very high strategic importance of Southeast Asia for both China and the US, there is an inherent danger of intra-regional rifts and proxy conflicts. And second, ASEAN-based multilateral security institutions are indispensable for stable Sino-US relations in the Asia Pacific region. The ARF, East Asia Summit (EAS), and ASEAN Defence Ministers’ Meeting Plus (ADMM+) have the potential to jointly develop into a long-lasting multilateral security mechanism. All three of these forums are built on ASEAN.

While the EU will remain a close security and diplomatic partner of the United States, this should not prevent it from adopting an active and autonomous approach on particular regional issues. To automatically follow Washington’s lead will not be helpful as the US is not a neutral party in regional security matters. The EU should continue the more active approach that it initiated in 2012, but without issuing joint statements with the US that refer to Asia Pacific security matters. ASEAN can support such an increased role for the EU in Southeast and East Asia by promoting EU membership into the EAS and the ADMM+.