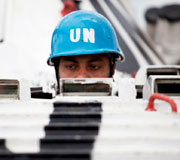 The renewal of the primarily protection of civilian (PoC) mandate of the UN mission in the Democratic Republic of the Congo (DRC) MONUSCO this month could have been a straight-forward process at a time when the Security Council’s attention has been focused on Syria. However, the contested and flawed presidential and legislative elections of November 2011 combined with March 2012 army mutinies leading to renewed violence in eastern DRC and escalation of tensions between Kinshasa and Kigali, have shed new light on some of the shortcomings of both the mission and its mandate.

Based on these, the Council unanimously adopted resolution 2053 (2012) on June 27, extending MONUSCO’s mandate for one year through June 30, 2013 at the same troop and police levels. But it also decided to make some key enhancements to the mandate itself as well as send some strong messages to the leadership of the UN mission, the government of the DRC, and “all outside support to all armed groups.”

The new Council resolution states that while PoC remains MONUSCO’s priority, “security sector reform (SSR) should be the primary focus within the stabilization and peace consolidation mandate of the mission,” and “requests MONUSCO to undertake a strategic review on the implementation of the International Security and Stabilization Support Strategy (ISSSS), providing a clear definition of stabilization in the context of Eastern DRC and a strategy and time frame for achieving these stabilization goals.” It also urges the government of the DRC to do its part in SSR and establishes a degree of conditionality in MONUSCO’s technical and logistical support to the upcoming local elections.

While the UN mission’s leadership may not have asked for it, nor the government of the DRC expressly consent to it, this enhanced mandate should be welcomed as it strongly calls on them to present the Council with a more coherent and comprehensive peacebuilding strategy. However, its implementation will present great challenges to the UN mission on the ground, and some of the critical issues will no doubt require the sustained engagement of Council members and international donors at a time when MONUSCO is being criticized from many fronts.

• The new focus on SSR and stabilization will require a strategic shift by the mission but also some capacities. While the UN stabilization team has recently been reinforced through the seconding of experts by donor countries – that will be able to support the mandated “strategic review” of the stabilization–MONUSCO urgently requires additional SSR capacities. Prioritizing these two issues must also be reflected in the mission’s structure if it is to break with the past period when stabilization and SSR specialists contributed only marginally to the strategic direction of MONUSCO.

• In spite of the strong language directed at the Congolese authorities on their primary responsibility regarding SSR, the political will for a comprehensive SSR strategy may still be lacking in Kinshasa. In this context, putting SSR within the stabilization–which is a more popular concept in Kinshasa as it involved building infrastructure for the people and the State administration–may be a useful entry point for rebuilding a “partnership with MONUSCO in the area of SSR” starting with eastern DRC as a second best.

• In a financial austerity context, even though MONUSCO will keep the same troop and police levels (in contrast to some other large UN missions being downsized), the Council clearly indicated that it will closely monitor the mission requesting three reports (from November 2012 to May 2013) on progress on the ground, including specific thematic annexes on the electoral process, SSR and stabilization, as well as on efforts towards transferring some of MONUSCO’s responsibilities to the UN country team.

• Last but not least, the Council reiterated its condemnation of “all outside support to all armed groups,” demanding that all forms of support to them cease immediately, echoing its June 15 press statement (SC/10675) calling on neighboring countries (without naming them) to prevent the armed groups in North Kivu from receiving outside support. With the African Union having nominated Rwanda for a UN Security Council seat next year, DRC’s neighbor may have an even greater responsibility towards regional stability, and has been reminded of this at a time when it is highly suspected of lending support to some groups in eastern DRC.

MONUSCO was born in June 2010 as a result of President Kabila publicly calling at the end of 2009 for UN peacekeepers to start withdrawing after a decade-long UN presence in the DRC, and the Security Council resisting this call based on the continuous need for protecting civilians in eastern DRC. An agreement was eventually reached to keep the UN mission in Congo under a completely reworked “stabilization” mandate. At the time the priority for the UN was to rebuild its relationship with the Congolese authorities, and a new SRSG Roger Meece was appointed to this effect.

Last year around the same time, the Security Council had decided that MONUSCO would only play a limited support role in the November 2011 presidential and parliamentary elections, through the provision of technical and logistical support as requested by the Congolese authorities. The polls, marred by widespread irregularities, fraud, and post-election violence, saw the re-election of President Kabila but weakened his regime’s legitimacy and put into question the UN mission’s support role.

Meanwhile, the UN’s stabilization and PoC strategies have shown their limits as violence has erupted again in eastern DRC. While nearly $200 million has been spend in the last three years through the international stabilization program for eastern Congo, the lack of impact and sustainability of this investment has raised concerns among international donors. Meanwhile the political will was lacking for security sector reform critical to Congolese institutions effectively taking over MONUSCO’s security role and assuming their primary responsibility to protect civilians.

As mentioned, the renewal of the mandate could have been a fairly straight-forward process at a time when the Security Council’s attention has been focused on Syria, and to a lesser degree South Sudan. However, a series of events since March have shed light on some of the shortcomings of both the decade-old UN mission and its mandate, prompting some experts like the International Crisis Group (ICG), in a June 11 open letter, to ask the Council to review its strategy in the DRC indicating that a “business-as-usual rollover” of the mandate would send the wrong message to all parties at a time when MONUSCO has lost credibility on several fronts.

Yet, when briefing the Security Council on June 12, MONUSCO SRSG Roger Meece did not ask for any major changes. He indicated that some security improvements were greatly jeopardized by the recent mutinies within the Congolese armed forces and the persistence of armed groups, and recommended maintaining the mission’s primary focus on PoC with a 12-month extension at the current authorized levels of blue helmets. He also recommended that the mission again provide logistical and technical assistance to the electoral authorities for the provincial assemblies and local elections tentatively scheduled for January 2013, but did not present any substantial changes in the mission’s overall strategy.

At the same time, MONUSCO came under fire from the government of Rwanda after an internal MONUSCO report was leaked to the BBC and alleged Rwanda’s role behind the army mutiny led by Tutsi-dominated ex-Congrès national pour la défense du peuple (CNDP) General Bosco Ntaganda and the newly formed armed group called 23 March Movement (M23). While similar accusations were later made by Human Rights Watch and the UN Sanctions Committee DRC Group of Experts (in a June 13 briefing to the Council and in the damning addendum to their interim report submitted to the Council on June 27), Rwandan officials repeatedly denied the claims and have responded by questioning MONUSCO’s effectiveness.

While the UN mission’s leadership may not have asked for it, nor the government of the DRC expressly consent to it, the Security Council, while extending MONUSCO’s mandate for one year through June 30, 2013 at the same troop and police levels, also decided to significantly enhance its mandate as presented above. In resolution 2053 (2012), Council members sent some strong messages to both the government of the DRC and “all outside support to all armed groups,” but also to the UN mission which he will closely monitor. While this reworked mandate should be welcome, its implementation will present great challenges to the UN mission on the ground, and some of the critical issues will no doubt require the sustained engagement of Council members and international donors at a time when MONUSCO is being criticized from many fronts.

Arthur Boutellis is a Research Fellow at the International Peace Institute.

About the photo: A peacekeeper in an armored vehicles in Bunagana, Democratic Republic of the Congo, May 2012 UN Photo/Sylvain Liechti.