For those of us following debates about the multilateral system, the notion of a crisis of multilateralism has had a remarkably long shelf-life. While the direst predictions of system collapse have not come to pass following the Russian aggression in Ukraine, the world is clearly in a moment of geopolitical transformation and competition that threatens to disrupt the post-war international order anchored in the United Nations Charter. This is what German Chancellor Olaf Scholz has called a global zeitenwende, or “an epochal tectonic shift.”

This challenging shift did not begin with the invasion of Ukraine. It has been coming for over a decade as the unipolar post-Cold War moment evolved into the current multipolar world. By 2016, in the wake of the vote for Brexit and a notable rise in unilateralist nationalism, many analysts and practitioners increasingly spoke in concrete terms of a crisis of multilateralism, broadly defined as a decline in international cooperation, a rise in geopolitical competition, and an overall fragmenting of the international order.

This crisis was deemed of such severity that in April 2019 the foreign ministers of France and Germany joined together to form the Alliance for Multilateralism to reinforce commitments to a multilateral order based on the respect for international law. The shortcomings of global climate diplomacy and the subsequent crises of Covid-19 and the war in Ukraine have further underscored geopolitical divisions and strengthened concerns about the state of multilateral cooperation.

Nevertheless, years of crisis have not prevented the multilateral system from operating. The institutions of the UN continue to function and produce results, however imperfectly. Even the supposedly moribund Security Council produced notable results in 2022, including among others its first-ever resolution on Myanmar, a renewed mandate for the UN mission in Afghanistan, and a landmark resolution establishing a long-sought-after humanitarian exemption to key elements of UN sanctions regimes.

Is there any sense to be made of all this? A better understanding is needed of where the system is working, where it is not, and where it is headed. What are the trends over time?

To help provide that understanding, IPI in partnership with the Institute for Economics and Peace (IEP) has been developing the Multilateralism Index, since late 2019.

The index analyzes the multilateral system between 2010-2020, based on 65 indicators across three dimensions (Participation, Performance, and Inclusivity) and five domains: (Peace & Security, Human Rights, Environment, Public Health, and Trade). 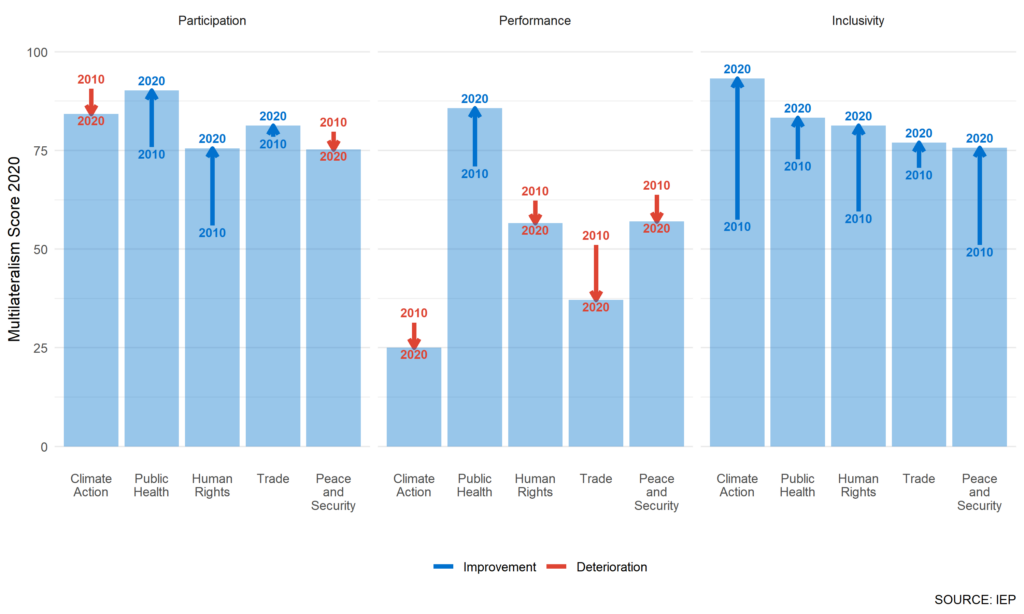 To adapt a quote by Kwame Anthony Appiah, an index “is like a camera that brings a view of its subject into sharp focus while leaving other features of the landscape blurred or out of frame. Its value comes from what, given its focal distance, it is able to capture.”

Our subject, the multilateral system, is large and complex. Inevitably there are elements that are beyond the frame of the Index’s focus, though its first findings capture some of the granular understanding that has been missing from discussions of the crisis of multilateralism.

In part, what we found may come as no surprise. Yet, in some areas, the findings are revealing. For example, as might be expected, over the period 2010-2020 we see a general decline in peace and security and human rights conditions around the world.

The number of countries globally that are not affected by state-based conflict fell to its lowest level on record in 2020.

Battle deaths between 2010 and 2020 reached their highest levels since the end of the Cold War, peaking during the height of the war in Syria.

And perhaps most distressing for the performance of the system of peacemaking, the success rate of peace agreements between 2005 and 2020 was half what it was between 1990 and 2005.

Perhaps this is all well understood, or to be expected. The revealing side of this research is that the data is not all bad for the multilateral system: While “performance” is down across four of the five domains, “inclusivity”—according to indicators of gender equality and non-state engagement—has improved across the board. Significant work remains—for example, much of the data on gender representation remains well below parity—but the trend lines are positive. Private sector engagement in particular has shown a consistent, steep rise in the past decade.

Meanwhile, the “participation” indicators show mixed results: some up, some down.

For example, the number of donors to peacekeeping is up over the period under review, however levels of overall funding are down.

On performance, the bright spot was public health. Even taking into account data from 2020, “performance” of the global public health architecture was up 2010-2020.

Indicators such as global life expectancy, probabilities of premature death from non-communicable diseases such as heart disease, and birth rates with skilled health staff around the world all improved.

One interesting result comes from a cross-indicator analysis. While participation in the International Human Rights architecture was up across 5 of 6 indicators, both performance indicators showed a decline.

Perhaps most damning, between 2006 and 2020, members of the Human Rights Council on average have had worse human rights scores than non-members.

What does this complex picture tell us about the state of multilateralism? While the crisis of multilateralism is often framed as one of decreased international engagement and the threat of widespread exit from multilateral institutions, risking an eventual collapse of the system, that is not what we are seeing.

What we are observing is not a threat of system exit per se, but rather a struggle over the changing nature and purpose of the system itself.

The crisis of multilateralism is not about decay. It is about transformation, complexity, competition, and uncertainty. The world has changed, and the system is struggling to adapt.

Around 1980, the share of power held by the five permanent Security Council members was overtaken by that of the rest of the world. (Click to enlarge)

There is a graph in the Index that shows the global distribution of material power from 1940-2020, based on military strength, population, energy consumption, and other factors. When the United Nations was founded, the five permanent members of the Security Council collectively held significantly more material power than the rest of the world combined. But around 1980, the share of power of the rest of the world overtook the share of power of the P5. This is an important precedent to the zeitenwende, the epochal geopolitical shift that the German Chancellor has been referencing.

To overcome the crisis of multilateralism, this change needs to be acknowledged and incorporated into a more inclusive and global approach to policymaking and practice. We are in a moment of transformation at a time of uncertainty. As we continue to track the changing multilateral system over time, we hope the Multilateralism Index can help to mitigate that uncertainty by providing a basis for informed decision-making on the policies meant to influence the system’s direction of travel and the future of international cooperation.

Adam Lupel is Vice President and COO of the International Peace Institute. This article is adapted from remarks delivered on November 3, 2022 at the Ministry of Foreign Affairs, Helsinki, Finland.