Russian troops land at an airport outside Moscow, Russia, Saturday, Jan. 15, 2022. Russia's defense ministry says the troops that were deployed to Kazakhstan as as "peacekeepers" by the Collective Treaty Security Organization, a Russia-led alliance of six former Soviet states, have returned home. (Russian Defense Ministry Press Service via AP)

On  February 21, Russian Federation President Vladimir Putin officially recognized two breakaway enclaves of Ukraine—the so-called Donetsk and Luhansk People’s Republics—as independent sovereign states. Putin then ordered Russian soldiers to conduct what he called “peacekeeping operations.” This was a clear violation of international law and an expansion of Russia’s 2014 invasion of Ukraine. But it was also a perversion of the important international concept of peacekeeping. Peacekeeping by the United Nations and other actors is an effective international tool for managing and helping to resolve armed conflicts and must be distinguished from the Russian invasion of Ukraine currently underway.

Ukraine is not the first place that Russian politicians have claimed their soldiers were conducting “peacekeeping operations.” According to Professor Alexander Nikitin, since the 1990s, Russian forces have engaged in “simulative peacekeeping”—military “operations with various legal underpinnings but not United Nations mandates.” Specifically, Russian politicians and media have tried to portray some of Moscow’s military operations in the post-Soviet space as “international peace operations in conflict areas.” They include the operations involving Russian troops in Moldova (in 1992), Tajikistan (in 1993), as well as South Ossetia (in 1992) and Abkhazia (in 1993) both of which are in Georgia.

Sometimes there was some merit to these claims, especially when there was a peace process and the mission received a mandate from the Commonwealth of Independent States. A lot of regional organizations have supported peace operations because of the influence wielded by their most powerful member states. But as Dr. John Mackinlay observed, “It was hard to compare the Russian military actions, which were proclaimed as “peacekeeping” operations, with any internationally accepted definition of peacekeeping.” Importantly, Russia’s efforts to portray its military actions inside Georgia as “peacekeeping” after the August 2008 war were widely rejected internationally.

After Russia’s invasion of Ukraine in 2014—openly in Crimea, and more covertly in Donbas—there was a relatively short-lived debate over whether it might be possible and wise to deploy United Nations peacekeepers to parts of eastern Ukraine. This ultimately made no headway at the Security Council, leaving the OSCE monitors as the only legitimate peacekeepers in Ukraine.

Then, earlier this year, Russia once again tried to depict its military power projection abroad as peacekeeping, this time in Kazakhstan. On January 5, the Moscow-based Collective Security Treaty Organization (CSTO) agreed to deploy about 2,500 troops there, most of which were Russian. Despite referring to them as “peacekeeping forces,” the soldiers were not supporting a peace process in Kazakhstan, but instead were used to quell domestic protests. The Russian troops withdrew before the end of the month.

Finally, concerning the current crisis in Ukraine, on February 19, the secretary-general of the CSTO continued the use of “peacekeeping” terminology by declaring the organization had a 17,000 strong military force kept in a state of constant readiness that could deploy 4,000 “peacekeepers” to Donbas if needed.

These longstanding efforts to portray Russian military power projection as peacekeeping appear to have had some success. When Russia officially recognized the breakaway enclaves of Donetsk and Luhansk and expanded its invasion of Ukraine, some media outlets initially adopted Putin’s language, describing invading troops as “peacekeepers.” Reuters was just one of the outlets that did this but subsequently issued a correction and deleted its earlier references to Russian “peacekeepers” in Ukraine. 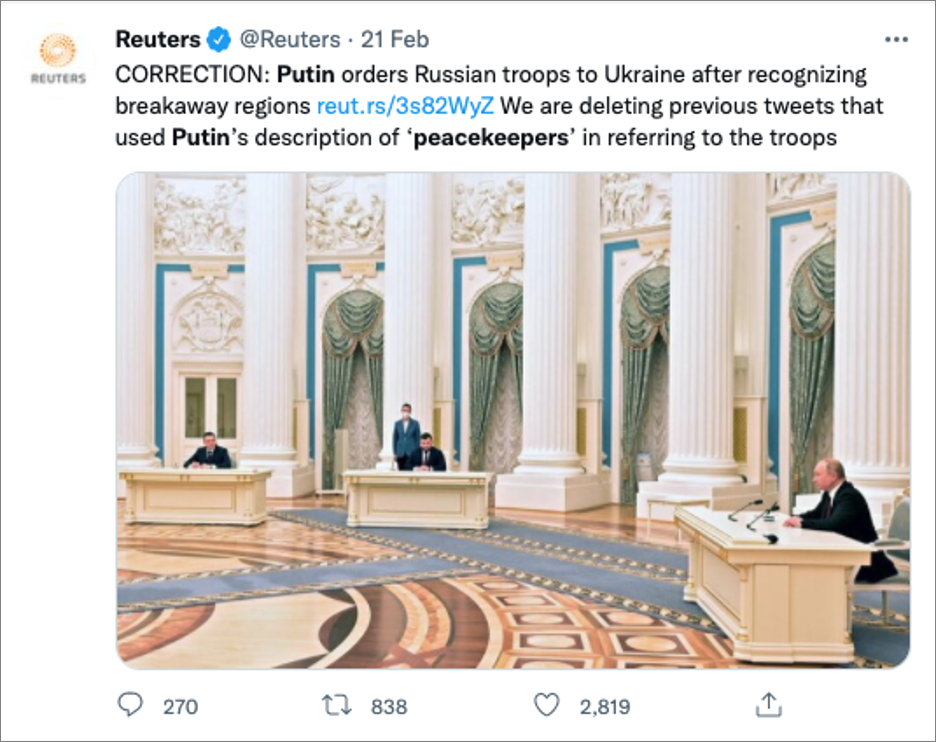 If Russia’s “simulative peacekeeping” has usually been camouflage for its military power projection, what is real peacekeeping? Peacekeeping is a difficult term to define, but it typically refers to the international—usually multilateral—deployment of personnel to support a peace process, a ceasefire, or a peace agreement. Some databases define it broadly to include civilian as well as uniformed (military and police) missions, while others focus more narrowly on the roughly two hundred operations involving uniformed personnel deployed around the world since the late 1940s.

In contemporary public discourse, peacekeeping is primarily associated with the United Nations, which has led over 70 peacekeeping operations, more than any other actor. Here, it is notable that the Russian Federation has generally provided very few UN peacekeepers. Except for the period 1992-97 when it deployed between about 850 and 1,650 uniformed peacekeepers, Russia has consistently deployed well below 100 UN peacekeepers.

The essence of peacekeeping as practiced by the United Nations and almost every other regional organization outside the post-Soviet space has two key elements. First, peacekeepers do not invade countries; they deploy only with the consent of the de jure authorities of the host state. In Ukraine, the de jure government has not invited these Russian troops. This is why a former head of the UN’s Department of Peacekeeping Operations, Jean-Marie Guéhenno, implored commentators not to “use the word “peacekeepers” to describe soldiers invading another country.”

Second, unlike Russian troops in Ukraine, peacekeepers do not fight wars to defeat enemies and occupy and annex territory. Instead, peacekeepers support peace processes and are supposed to be impartial in the execution of their mandate. Although this may sometimes involve the use of deadly force, peacekeepers use coercion to bring actors back into line with a peace process or agreement, not simply to defeat enemies and achieve a military victory. This is why UN Secretary-General António Guterres expressed his concern that Putin’s actions represent “the perversion of the concept of peacekeeping. When troops of one country enter the territory of another country without its consent, they are not impartial peacekeepers. They are not peacekeepers at all.”

The UN Secretary-General is correct and the organization’s member states should ensure that international peacekeeping’s good name is not tarnished by repeated Russian attempts to undermine it.