“Never again mess with the family, never again mess with our children.” This was the message from Fabricio Alvarado to a crowd of supporters after he won the first round of Costa Rica’s presidential elections on February 4th. This was no typical election-night party for Costa Rica, a country known for political stability and moderation. For the first time in decades, neither of the two long-time dominant parties will make it to the second round on April 1st.

The rise of Fabricio Alvarado began just three weeks before election day and can be tied to a single event: the Inter-American Court on Human Rights’ (IACHR) January 9th ruling that all 20 countries recognizing its jurisdiction should legalize same-sex marriage. Alvarado, an evangelical journalist and singer, attacked the decision, threatening to withdraw Costa Rica from the court. Seemingly overnight, he leapt from sixth in the polls to first (from 3% to 17%). This surge is being called a shock religioso—a backlash against same-sex marriage driven by religious conservatives.

This backlash reflects the advancement of same-sex marriage into new territory. When countries first started legalizing same-sex marriage in the 2000s, most did so as part of a gradual social and legal progression. Almost all of them already recognized same-sex unions in some form, and they extended this recognition to marriage through legislation. Most importantly, public support was over 50% (except in South Africa) and growing. This held true even as same-sex marriage made its national-level debut in Latin America: in Argentina in 2010 and Uruguay in 2013.

With such low public support, a backlash should come as no surprise. In Colombia the backlash contributed to the stunning defeat of the 2016 referendum on the seemingly unrelated peace deal between the government and the Revolutionary Armed Forces of Colombia (FARC). The referendum came barely five months after the legalization of same-sex marriage, and opponents of the peace deal used this and other polarizing controversies related to gender and sexual orientation to mobilize religious conservatives against it.

Since same-sex marriage was legalized in Brazil, legislators and judges have launched an assault on gay rights. A bloc of socially conservative evangelicals has steadily gained seats in the lower house of the legislature—from 3% in 1985 to 15% in 2014—and took advantage of legislative rules to block a bill banning anti-gay discrimination. In 2017 a judge overruled a 1999 ban on “gay conversion therapy.” And an anti-gay candidate is a top contender in presidential elections set for October. This political drama is taking place against the backdrop of an epidemic of violence against LGBT people, which reached a new high in 2017: 387 murders and 58 suicides.

Does this mean turning to the courts to legalize same-sex marriage is pushing the law too far ahead of social change? Supporters of the “backlash thesis” would say yes. As one legal scholar argued in relation to the litigation campaign for same-sex marriage in the US, “Those who rely on the courts absent significant public and political support will fail to achieve meaningful social change and may set their cause back.”

Indeed, in some countries, focusing on same-sex marriage may not be the best approach to advancing LGBT rights more broadly. As said by an LGBT activist in Nicaragua (where support is half that in Costa Rica), “We’re happy because [the ruling is] an achievement…, but in the case of Nicaragua we’re focused on issues like improving the health law…, access to education, and gender identity.” Issues like these are less high-profile but can matter just as much, if not more, especially to the most vulnerable members of the LGBT community, including transgender people. In fact, though less noticed, the IACHR’s ruling was not just about same-sex marriage; it also affirmed people’s right to change their identity cards to match the gender they identify with. 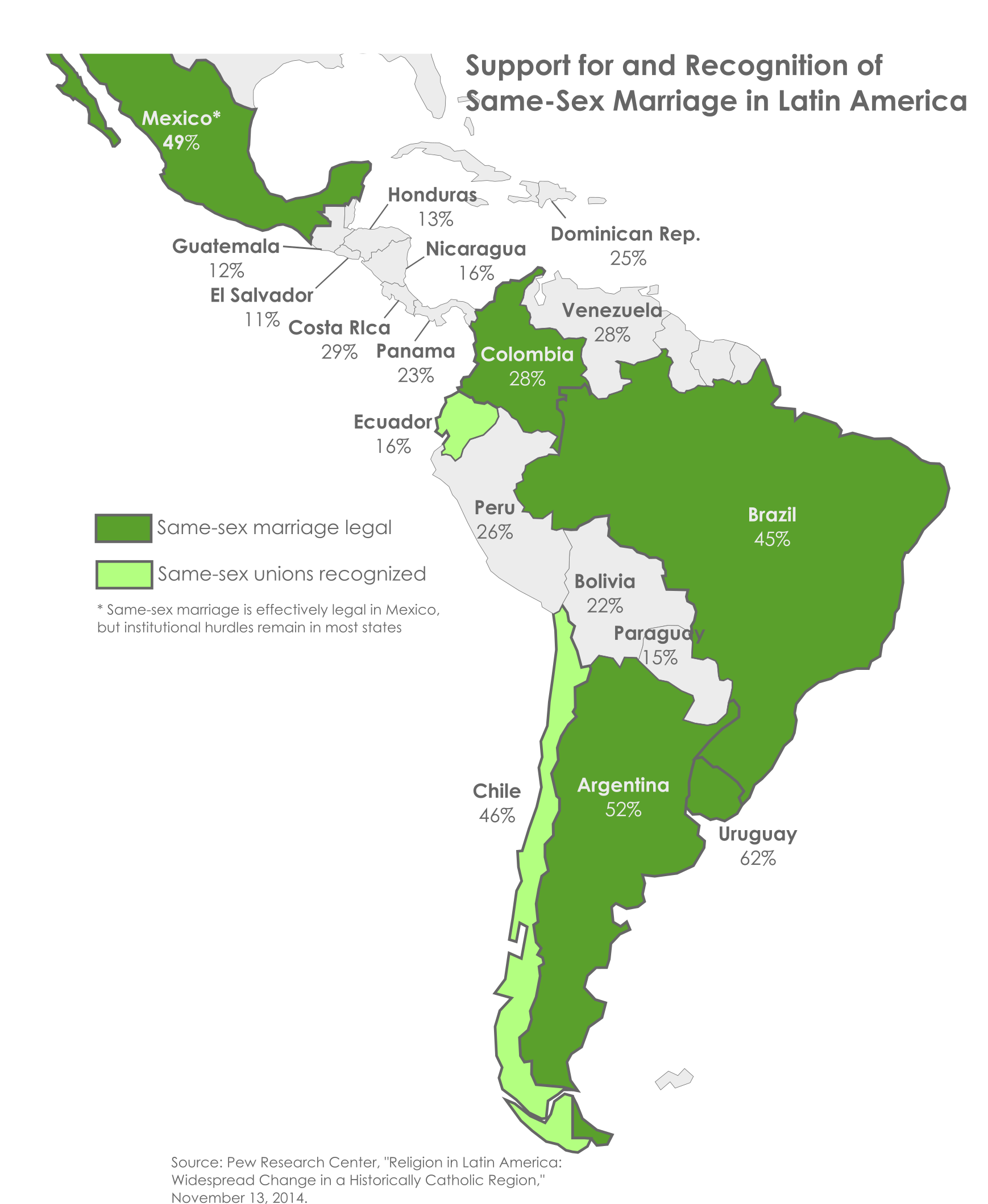 While it’s important that campaigns for LGBT rights extend beyond same-sex marriage, they needn’t preclude it out of hand. In fact, the “backlash thesis” has its fair share of critics. For example, one legal scholar noted that early court rulings on same-sex marriage in the US “changed domestic partnership policies from radical, cutting-edge proposals to moderate compromises.” Following this line of reasoning, the IACHR decision on same-sex marriage could cast other forms of same-sex unions in a softer light—and in some countries these might be a most realistic first step. One Panamanian activist responded to the court decision saying, “I can’t tell you we’re demanding marriage. We’re talking about other legal forms that enable us to be able to bring protection to our couples.”

Moreover, legalization of same-sex unions in Latin America hasn’t always triggered reactionary opposition on the right. Chile’s center-right president-elect has pledged to continue his center-left predecessor’s legislative push for marriage equality. When he was mayor of Buenos Aires in 2009, Argentina’s center-right president decided not to appeal a judicial decision legalizing same-sex marriage in the city. These decisions likely reflect political calculations that appearing more socially moderate would pay off at the ballot box.

When the risk of a backlash seems too great at the national level, same-sex marriage could also be pursued at the state or local level, as it has been in Brazil, Mexico, and the US. Such efforts can sometimes avoid the level of backlash seen after national victories. Since 2010, dozens of lawsuits have made same-sex marriage legal in 10 of Mexico’s 31 states. But broad opposition didn’t take off until after the unpopular president stepped in to propose amending the constitution to allow same-sex marriage nationwide.

Focusing on the backlash alone is also one-sided. Legal victories for same-sex marriage can mobilize not only opponents but also supporters. In Costa Rica, Fabricio Alvarado wasn’t the only candidate to rise in the polls after the ruling by the IACHR; so did Carlos Alvarado, who rose from fifth to third (from 5% to 11%) and ended up placing second. The resulting Alvarado-Alvarado runoff is a battle of opposites. Carlos Alvarado is from the party of the outgoing president, who extended various benefits to same-sex couples and flew the gay pride flag outside the presidential palace—possibly the first head of state in the Americas to do so. He also solicited the decision on same-sex marriage from the IACHR that caused the backlash. While some other candidates seemed to tack to the right in the wake of the decision, Carlos Alvarado didn’t waver in his support. He may have surged by attracting those who bridled at the conservatism of his opponent.

Finally, the duration of these backlashes is unclear. The sizeable generation gap in views on same-sex marriage could indicate a demographic tide against homophobia: in Costa Rica, support is 20 percentage points higher among those aged 18–34 than among those over 35. But the growth of evangelical Christianity across the region could pull the tide in the opposite direction: Protestants, who have grown to a quarter of Costa Rica’s population, are more than twice as likely as Catholics to oppose same-sex marriage. Whichever of these forces is stronger should become apparent on April 1st when the two Alvarados face off.

Albert Trithart is Editor at the International Peace Institute.