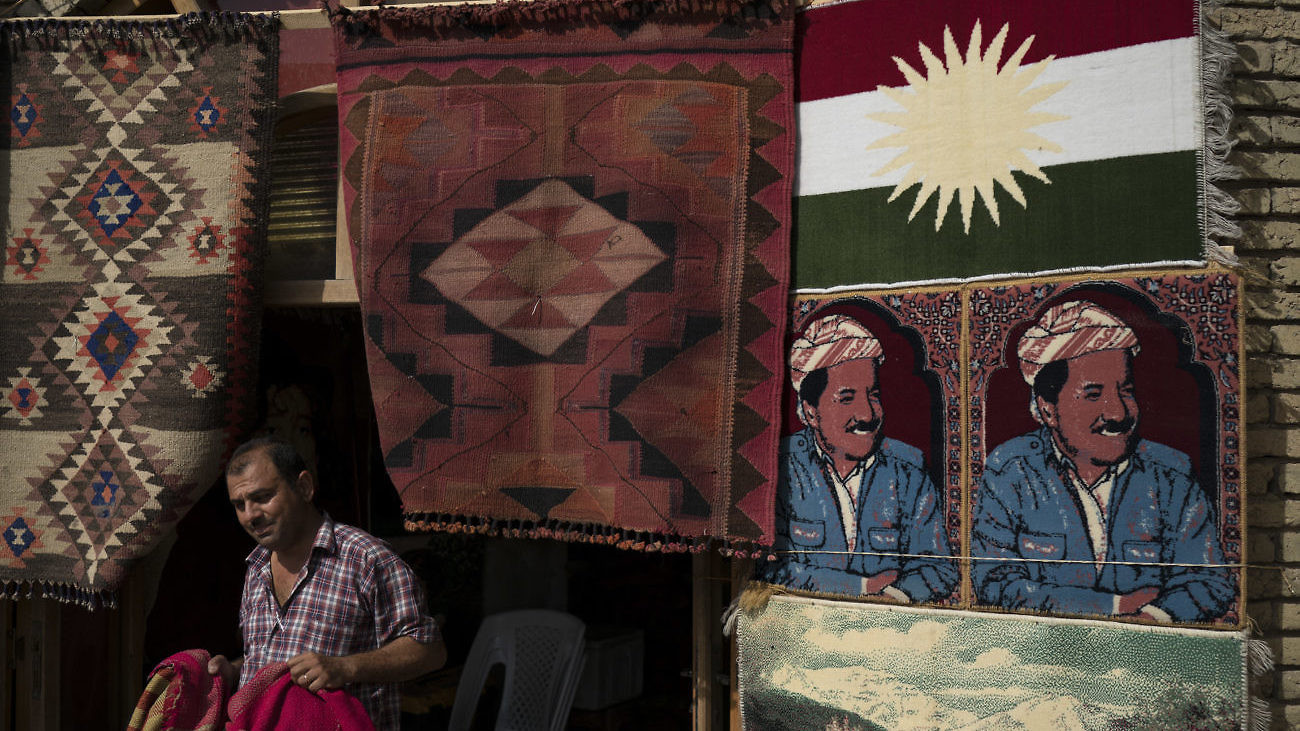 A man sells rugs depicting Kurdish president Masoud Barzani, right, in Irbil, Iraq, on October 25, 2017. In September, Iraq’s Kurds celebrated their symbolic vote for independence, but have lost their most important oil-producing city to Iraqi troops, squeezing a hurting economy and dashing the hopes of an independent state. (AP Photo/Felipe Dana)

Despite nearly universal regional rebuke of the Kurdish referendum before the September 25 vote, Iraq’s Kurdistan Regional Government (KRG) pushed forward on what it seemed to believe would be a path to independence. Instead of bringing about Kurdish statehood or boosting the KRG’s negotiating power, however, the referendum backfired spectacularly. Although Kurdish leaders indicated that the vote would not immediately lead to independence, for KRG neighbors with large Kurdish populations of their own such as Turkey, Iran, and Syria, the referendum symbolized a precarious step toward secession.

Since refusing to back down, the KRG has experienced aggravated relations with Baghdad and other regional governments, and lost control over economically significant territories including oil-rich Kirkuk. The question that follows is: why did former KRG President Masoud Barzani hold a referendum vote despite immense pressure not to do so? The decision, and the current destabilized situation in the KRG that resulted, was made possible by a series of miscalculations, both within the KRI and without.

The Miscalculations of Kurdish Groups

Masoud Barzani initially called for a referendum vote in 2014 after rapid ISIS expansion overwhelmed Iraqi national forces. However, the vote was delayed due to financial and political pressures, including collapsing oil prices and an Islamic State presence that lasted longer than Kurds calculated. With ISIS forces in retreat in recent months, the KRG president promptly called for a referendum once again.

Despite Barzani’s strong desire for an independent and unified Iraqi Kurdistan, fractures have been brewing. For example, in recent years the KRG has suffered from deteriorating economic conditions, in which Kurdish state employees went unpaid for over two years, resulting in widespread frustration. Within government, the Kurdish parliament has not regularly convened for over two years due to disputes regarding presidential term limits. Meanwhile, former President Barzani governed with a controversial mandate, symptomatic of the pervasive corruption within the KRG.

The referendum also exacerbated tensions within Iraqi Kurdistan’s already divided political landscape. Opposition parties such as the Kurdistan Islamic Group, known as Komal, and the Movement for Change or Gorran, both declared a boycott of the referendum, only to reverse their positions hours before the vote began. This signified the parties’ capricious support of the KRG and a hope to resume parliamentary action post-referendum. Similarly, opposition from the Patriotic Union of Kurdistan (PUK), a traditional rival of Barzani’s Kurdistan Democratic Party (KDP), further aggravated circumstances.

An example of the ramifications of these disputes is the retaking of the contested city of Kirkuk from the Kurds by Iraqi forces and Iran-backed Iraqi Shia militias on October 16. The speed and ease in retaking the city was due to an agreement between Iraqi Prime Minister Haider al-Abadi and a faction of the PUK. The PUK’s unexpected acquiescence to Baghdad was perceived by some Iraqi Kurds as a betrayal of the KRG, one that resulted in major economic losses for the Kurdish region. The Iraqi military quickly recaptured most of the disputed territory between Baghdad and Erbil consisting of military bases and oil fields, and took control of the center of Kirkuk. In sum, Barzani failed to accurately gauge the disunity along Kurdish party lines and to anticipate that the partial support of the PUK for the referendum would culminate in the loss of Kirkuk.

The Miscalculations of Regional Players

In addition to contestation from within the KRG, Barzani also seemed to miscalculate or at least underestimate responses from Baghdad, as well as from neighboring capitals. Iran and Turkey, for example, were concerned the referendum would spur independence movements among their own Kurdish minorities and thus destabilize the region as a whole. With approximately 8 million Kurds in Iran—nearly as many as in Iraq—and about 15 million in Turkey, both states coordinated with Iraqi forces to conduct joint drills and maintain an offensive position, making clear their opposition to the referendum.

Barzani and the KRG expected more flexibility from Baghdad in pushing for independence given Kurdish Peshmerga and Iraqi forces’ collaboration in the fight against the ISIS. In contrast, however, Iraq responded with a hardened stance to protect the status quo surrounding the disputed territory. Prime Minister Abadi previously acknowledged self-determination as the right of the Kurds, but called for the KRG to postpone the vote and threatened using military measures to prevent Kurdish succession. As the referendum neared, Abadi toughened his position, urging the vote be canceled altogether and thereby increasing the political stakes for the KRG. After the vote, Abadi urged governments to deal exclusively with Baghdad for trade in an attempt to cut off Kurdish financial lines and welcomed military support pledged by traditional regional rivals Iran and Turkey. The KRG miscalculated and underestimated Abadi’s threats of military intervention as well as his ability to unify other regional players to actively denounce the referendum.

Counting on Turkish support prior to the referendum vote was, in many ways, unsurprising. The relationship between Barzani and Turkish President Recep Tayyip Erdoğan had been amicable, and the economic ties between the KRG and Turkey were strong. That said, given sectarian tensions with Baghdad, Barzani played an important role as a Sunni ally, not only within Iraq, but across the Middle East. Having lost influence in Egypt after the ouster of the Muslim Brotherhood’s Mohammed Morsi and then sullied relations with Gulf states over its support of Qatar, Turkey found in the KRG an actor with which to align itself to be able to claim status as a major Sunni regional power. From this perspective, an independent Kurdistan could actually enhance Turkey’s role in the Middle East—a reason, perhaps, why Erdoğan’s post-referendum rhetoric has been much harsher than the concrete punitive measures taken. These are basically limited to military build-up along the Turkey-KRG border, joint exercises with Iraqi forces, and the closure of airspace to flights originating in the KRG. As Erdoğan’s foreign policy rhetoric is equally calculated, this time based on the anti-Kurdish nationalist support he can gain back home before key elections in 2019, Barzani’s beliefs about the nature of Turkish support may only be a misperception in the short-run, a war of words that does not substantially threaten future cooperation.

For its part, Iran has a longstanding relationship with Iraqi Kurds, especially in joint efforts against ISIS. Mutual interests have also brought the KRG and Iran together economically. The KRG-Iran border has been a hotspot for trade, with the city of Mahabad serving as a locus for Iraqi Kurdish goods entering Iran. Paradoxically, the crossover between the KRG and Iran has ignited Iranian retaliation after the referendum. Iran fears that the ease of movement across its borders will make secessionist inspiration among its own Kurdish minority likely. Following the referendum, Iran closed its borders with the KRG, and is deploying military guards and weapon systems including missiles and drones along the border. Barzani thus underestimated the lengths to which Iran is willing to go to protect Iraqi national unity and their own Iranian Kurdish population.

A Miscalculation in Change of Leadership?

Even prior to the strategic change in leadership, Nechirvan Barzani urged that there would be no immediate independence or “redrawing of borders” between the Kurdish region and the rest of Iraq. Similarly, he recently proposed to “freeze” the referendum results while the KRG works to resolve its differences with the Iraqi government. Despite the younger Barzani’s attempts at reconciliation, Prime Minister Abadi demanded that Kurdish leaders cancel the results altogether. Additionally, the Iraqi government has continued to shell Kurdish Peshmerga positions in the Iraqi town of Zummar, and maintained an offensive position on unification with Turkey and Iran.

In a final miscalculation, the KRG believed that the introduction of Nechirvan Barzani would mute domestic and regional opposition. However, political tensions and instability following the Kurdish referendum remain high. Recognizing this position, last week the KRG rolled back its stance to respect the Iraqi Federal Court’s decision that the vote was unconstitutional.

With little possibility for any shift in regional support, acquiescence from Baghdad, or unity among Kurdish groups anytime in the near future, Iraqi Kurds’ independence aspirations now seem more distant than ever.

Katie Klain is currently obtaining her Bachelor of Arts in Political Science and Human Rights at Barnard College of Columbia University. Her current focus concerns comparative politics in the Middle East and conflict prevention diplomacy.