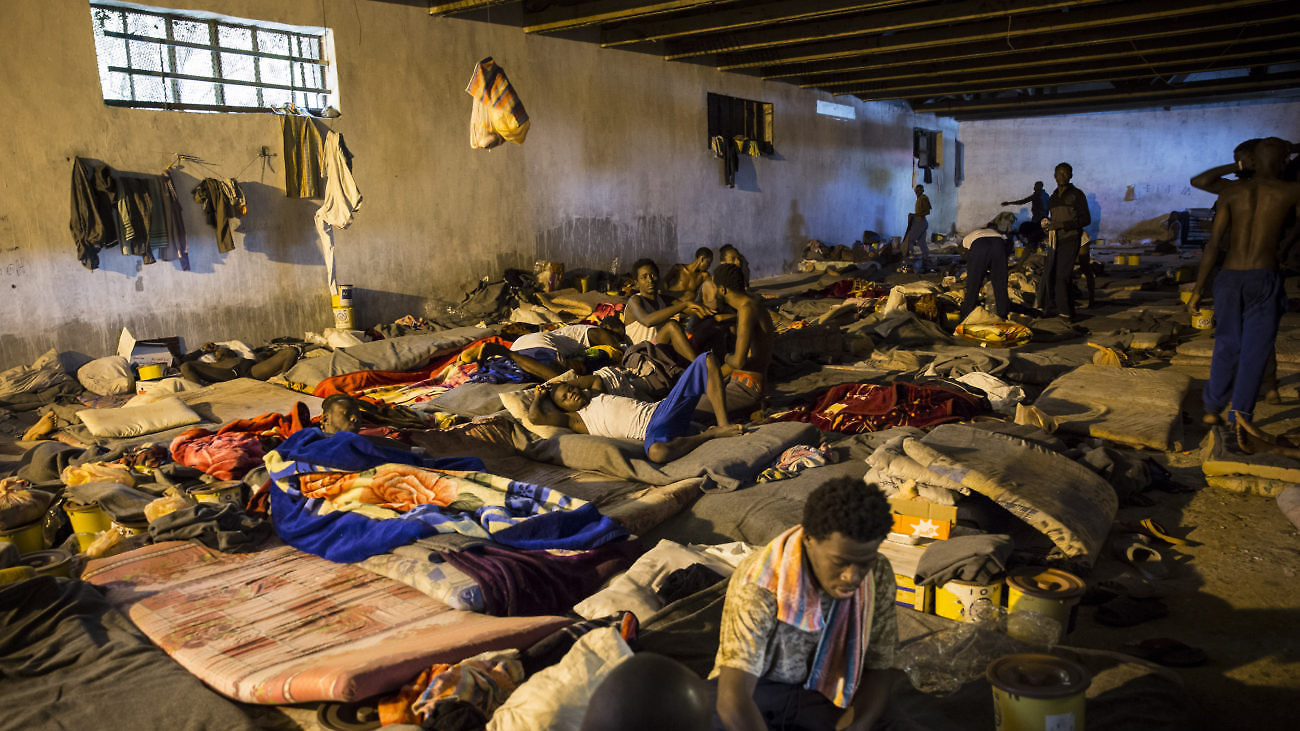 Young men in a Detention Center in Tripoli, Libya on June 08, 2017. (Florian Gaertner/Photothek via Getty Images)

The footage of migrants in Libya being sold by smugglers has sparked international outrage and prompted demonstrations across the globe. Yet, the alarm bell has been raised before by the UN Support Mission in Libya (UNSMIL), who mentioned the “frequent buying and selling” of migrants in a 2016 report. Despite awareness of the issue, the prevailing lack of governance and insecurity has hampered the ability and political will of Libyan authorities to prevent this form of human trafficking and to adequately manage migration flows. The African Union (AU) and European Union (EU) high-level summit tomorrow in Cote d’Ivoire is an opportunity for leaders to focus on addressing the root causes of migration and to provide a sustainable and effective response.

There are currently between 700,000 and one million migrants in Libya, including 25,500 held in facilities under the control of the Libyan Directorate to Combat Illegal Migration (DCIM). Since the overthrow of the Gaddafi regime, insufficient border control has allowed smugglers and traffickers—including armed groups—to prey on waves of migrants. The large majority of migrants are from sub-Saharan Africa, mainly Guinea, Côte d’Ivoire, Mali, Senegal, the Gambia, and Nigeria, and reach Libya through Niger with the help of smugglers or criminal networks who bribe them with false promises of passage to Europe.

Many migrants stay in Libya—either by choice or by force—where the reality is grim. Human trafficking and serious human rights abuses and violations including arbitrary detention, torture, unlawful killings, and sexual exploitation and abuse are rife. Migrants may even be extorted by smugglers and traffickers or sold into forced labor at auctions. Migrants that avoid these circumstances and fall under the control of Libyan authorities do not fare much better. They are transferred to DCIM detention facilities where they are arbitrarily held for indefinite periods with no formal registration, legal process, or access to lawyers or judicial authorities. Conditions in these detention centers, where women, men, and minors are held together, have been described as “inhuman.” GNA authorities have yet to specifically address circumstances in detention centers under DCIM’s authority and have invited international observers to check the conditions for migrants.

Due to the shifting and fragmented power dynamics in Libya, unofficial detention centers managed by armed groups and militias have also emerged—further exacerbating the risk of exploitation and abuse of migrants. National and international organizations lack access to these detention centers, making it nearly impossible to monitor the human rights situation or to provide humanitarian assistance to those detained.

In response to news reports, the Libyan UN-backed Government of National Accord (GNA) announced a formal investigation to bring those responsible for auctions to justice and to ensure that victims are safely returned to their countries of origin. While the launch of this investigation is welcome, there are important logistical challenges.

The first is the government’s lack of territorial control. Libya is currently divided among three rival governing authorities each with territories managed in association with coalitions of armed groups.  Secondly, given the collapse of the judicial system, the absence of the rule of law, and widespread impunity, one can hardly imagine how Libyan judicial authorities could effectively conduct investigations throughout the country, let alone identify those held in DCIM facilities that lack proper record keeping.

Perhaps most troubling is that in addition to the involvement of armed groups and criminal networks in human trafficking, the UN Office of the High Commissioner for Human Rights (OHCHR) received credible information in 2016 that “members of State institutions and some local officials participated in the smuggling and trafficking process.” Further, the worst cases of trafficking and smuggling were documented in areas under the control of the GNA. Official DCIM centers have also reportedly been linked to the exchange of migrants to smugglers and traffickers for fees. This reality casts the ability of Libyan authorities to conduct an impartial and independent investigation into serious doubt.

Despite the known risks and conditions of detention, migrants continue to transit to and through Libya. Recent approaches by the EU to decrease migration flow by preventing migrant boats from reaching its borders may have led to arrivals falling by 70%, but they have also increased the number of migrants stranded in Libya. These challenges highlight the urgent need to address the migration issue at its source. Campaigns showcasing stories of returnees to dissuade and educate potential migrants have largely failed to deter young people from attempting the journey. African states should rather take ownership and invest in addressing the factors that motivate a young person to leave everything behind, particularly in light of the EU deal struck with Turkey. Part of taking ownership should be to move beyond condemning and to assess why people are willing to flee their countries and endure the transit with no guarantees and at great risk.

In a 2016 report, the UN High Commissioner for Refugees found that the primary drivers for leaving mentioned by migrants were economic. The majority of migrants transiting through Libya are young men who flee economic realities that include poverty, inequality, and lack of opportunity. The prospect of employment, higher salaries, and the ability to send money back home from Europe is appealing. It is therefore crucial that African states invest and stimulate employment opportunities for youth and address the governance and development deficits driving migration. Political, security conditions, and climate change have also been mentioned as drivers. In line with the UN’s sustaining peace and 2030 agenda for sustainable development frameworks, the root causes of conflict and violence in these countries must be addressed as part of any effort to stem migration.

Addressing the root causes of migration will also require broader international action, including financial support. In 2015, the EU adopted a 425 million euro Emergency Trust Fund for Africa (EUTF for Africa) aimed at reducing the flow of migrants transiting irregularly for economic purposes. However, this type of emergency aid too often fails to translate into sustainable long-term investment and development, and rather tends to be securitized, translating into increased border security. As stated by Niger President Mahamadou Issoufou, there should be “less aid and more investment.” Economic structural reforms must also be put into place to address governance challenges and tax fraud, corruption, and illicit practices by multinational corporations.

Both AU and EU leaders must join their efforts towards tackling irregular migration at its origins. Efforts must be further coordinated with the goal of establishing safe avenues for migration and averting any kind of exploitation and abuse of migrants in line with Sustainable Development Goal 10.7. The upcoming summit provides a choice opportunity to begin doing so. Otherwise, young people will continue to attempt the perilous journey—reckoning that conditions will always be better elsewhere—and it is not unreasonable to expect more unfathomable scenes of humans being auctioned in the 21st century.

Aïssata Athie works with the Center for Peace Operations at the International Peace Institute.