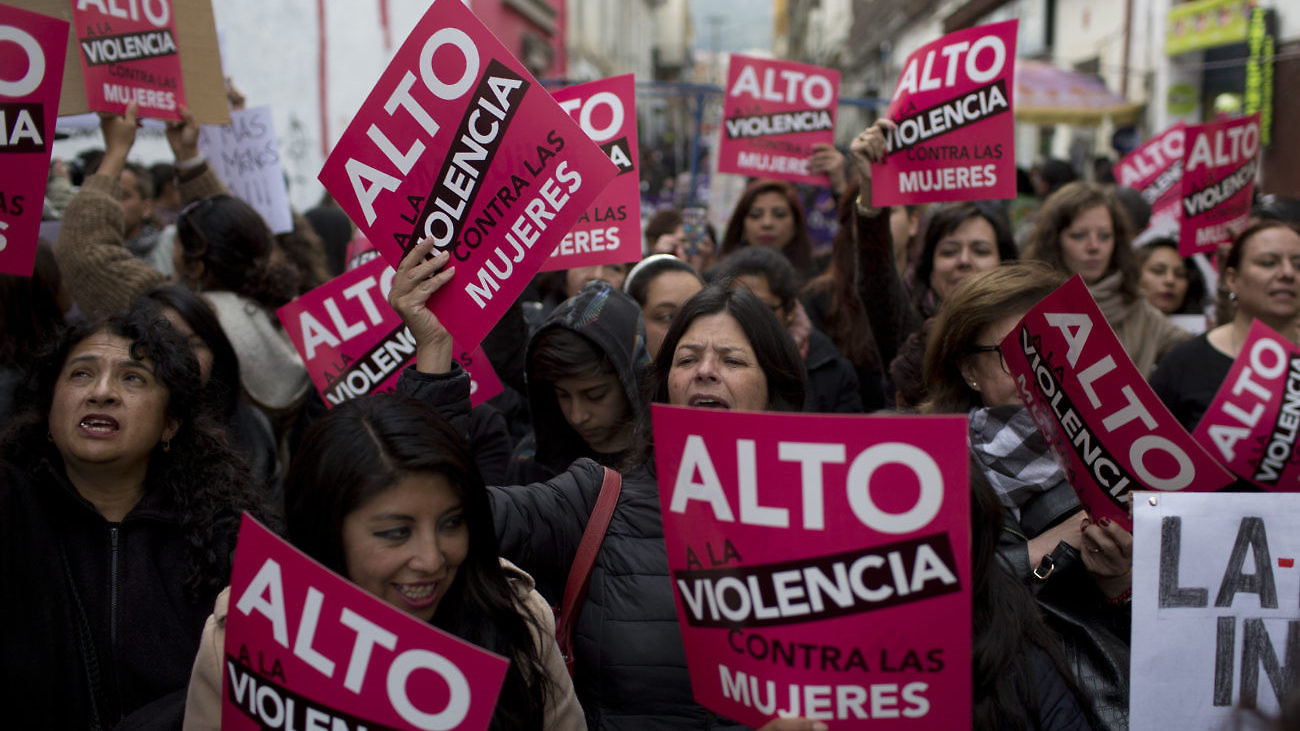 A recent survey of female parliamentarians by the Inter-Parliamentary Union underscores the global dimensions of a troubling trend: across 39 countries, 44 percent of surveyed women reported having received threats of death, rape, assault, or abduction. One fifth said they had been subjected to sexual violence.

The murder of British Labour MP Jo Cox, who was fatally shot and stabbed outside a library in her constituency in June 2016, drew public attention to the violent online threats British female politicians experience on a daily basis—threats that the media and public had often dismissed as meaningless. And research published this past August suggests that, in the often violent world of Kenyan politics, women candidates (and their followers and families) are uniquely targeted in gender-specific ways.

Violence against women in politics is not a new phenomenon. Women who seek political power have always faced resistance. Yet as more and more women around the world run for office, claiming their right to equal participation (as enshrined in the United Nations CEDAW convention), the backlash has intensified and become more visible. Over the past two decades, dozens of countries have adopted legislative quotas and parity laws to ensure women’s political representation in a context of structural inequality. While the limitations of such measures have been widely debated, it is undeniable that they have enabled more women to enter politics than ever before.[1]

However, efforts to promote women’s political leadership have rarely been coupled with mechanisms to ensure their security and well-being in the public sphere. As feminist scholars have long argued, political systems are often patriarchal systems, resistant to change and violent when challenged. Of course, politicians of all genders encounter threats and intimidation, particularly in countries where violence is embedded into the logic of political competition. Yet existing research shows that female candidates and politicians face unique risks. They are often targeted because of their identity as women, and/or targeted in in gender-specific ways.[2] For example, female politicians—particularly those who stand in way of male opponents or powerful interest groups—are routinely threatened with rape, harassed with sexist comments, or accused of sexual and moral impurity. Threats and harassment often comes from multiple sides: from opposition parties and supporters but also from women’s own colleagues and communities. In many societies, women who enter politics also face sanctions and intimidation within the private sphere.

Violence and harassment inhibits women’s equal participation in politics—by discouraging them to run for office, undermining their electoral fortunes, or forcing them to ally with powerful male elites for protection or compromise their political agenda in other ways.[3] Yet in many contexts, threats and harassment of female politicians are dismissed as insignificant (“just online banter”), imagined (“not about gender”), or routine (“just the cost of doing politics”). Perpetrators of violence are rarely brought to justice.

In response to these different forms of silencing, activists in a number of countries have pushed for legal reforms that would formally recognize the specific threats facing women in politics and close existing protection gaps. Such efforts have taken different forms: some have lobbied to expand existing laws prohibiting gender-based discrimination in the workplace or violence against women in general. Others have advocated for new legislation in order to codify violence against women in politics as a separate and specific offense.

The push for criminalization has been most significant in Latin America, where violence against women in politics is a pervasive challenge. In 2016, ECLAC’s Regional Conference on Women in Latin America and the Caribbean identified political harassment as a key obstacle to the political participation of women across the region.[4] While Bolivia remains the only country that has passed a law specifically prohibiting and criminalizing violence against women in politics (Law 243 of May 2012) to date, at least five other countries have discussed similar bills. The Bolivian legislation was the result of tireless advocacy by the Association of Councillors of Bolivia (ACOBOL) and its allies, who documented thousands of incidents political harassment around the country, particularly in rural areas. The law targets both harassment and physical and psychological violence, provides detailed descriptions of the acts that fall under its purview, and establishes specific administrative, penal, and constitutional sanctions.[5]

Over the past several years, the Bolivian example has inspired activists and parliamentarians across the region to push for comparable statutory reforms. In Peru, Ecuador, El Salvador, Mexico, and Costa Rica, different draft laws have been proposed in parliament but have yet to be passed.[6] Parliamentarians often object that existing laws already cover violence against female politicians. In Peru, for example, the 2016-2021 National Plan against Gender Violence for the first time recognized political harassment as a specific form of gender-based violence, but a bill aimed at criminalization remains stalled in parliament.[7] In Mexico, efforts to incorporate more explicit provisions dealing with violence against women in politics into pre-existing laws on elections and gender-based violence have passed the Senate but have yet to clear Chamber of Deputies.[8] A new protocol on dealing with political violence against women has been announced but has yet to be implemented.[9]

Despite these challenges, the Bolivian law and parallel efforts at legal reform have played an important role in drawing attention to the high levels of violence and harassment facing female politicians across the region. Activists have used legislative proposals as a tool to highlight gaps in existing legal frameworks and call on political parties and electoral institutions to do more. As feminist legal scholar Catherine MacKinnon notes, laws that name and criminalize a specific phenomenon can help “legitimize injuries as injuries in order to delegitimize our victimization by them.”[10] Given that violence against women in politics is often aimed to silencing and erasing the targets, the power of legal recognition should not be underestimated. Laws can help mobilize public awareness and challenged the notion that violent acts are simply the “cost of doing politics.” In Bolivia, Law 243 has provided an important framework for civil society mobilization and advocacy.

Yet five years after its passing, it is clear that the law also suffers from important weaknesses. It does not provide mechanisms to protect the person who reports incidents of abuse from potential reprisals, does not take into account the specific vulnerabilities of indigenous women, and fails to cover women active in social organizations—despite the fact that the latter often serve as women’s entry point into political life. However, the greatest challenge by far stems from weak implementation and enforcement—a failure that underscores the limitations of legal solutions to violence against women in politics.

The limits of legal reform

Since 2012, ACOBOL has reported hundreds of incidents of harassment and violence against female Bolivian politicians. By 2016, only one had resulted in a conviction and the reinstatement of a councilwoman who had been coerced into renouncing her seat.[11] Police continue to attribute acts of violence against women in politics to general insecurity rather than to gender-specific discrimination. Moreover, the adjudication mechanisms do not guarantee speedy access to justice, which means that victims often remain stuck in limbo for months if not years while their case makes it through the system.[12]

These challenges highlight the limitations of legal reform in a context of general insecurity and impunity. First, it can be difficult to distinguish between violence directed against women due to their gender identity and other forms of political violence—particularly since the latter may still manifest itself (and is experienced) in gendered ways. As Piscopo notes, “women’s structurally subordinate position affects how they experience the violent or coercive practices already inscribed within the social fabric.”[13] A narrow focus on criminalization can obscure the larger structural and societal forces that undermine democratic competition, as well as their specific and often disproportionately negative impact on women.

Second, while legislation can help mobilize public opinion and shift societal attitudes, it also depends on effective enforcement mechanisms. If justice systems are slow and inaccessible and police forces sources of insecurity rather than protection, legal reforms that put the onus on criminal justice mechanisms are likely to offer limited redress. In a study of laws targeting gender-based violence in El Salvador, Walsh and Menjivar find that despite the existence of legal protections, justice officials in a context of generalized insecurity often interpret violence against women as ordinary—particularly violence targeting women who are already marginalized in terms of race, ethnicity, or social class. Inaction on the side of the justice system ensures the continued normalization of criminalized behavior: victims are pressured to reconcile with aggressors or their claims are dismissed.[14]

Lastly, legal codifications are inevitably narrow, and are not necessarily adequate reflections of women’s lived experiences of harm. They generally give weight to physical injury, and are typically not well-equipped to address the wider scope of symbolic, economic, or psychological violence. Even the Bolivian Law 243, which was drafted in close consultation with feminist activists, conceives of violence against women in politics as a series of discrete harmful acts, while not necessarily taken into account how different forms of discrimination, marginalization, and abuse can overlap and reinforce each other over time.[15]

The multidimensional nature of the problem calls for holistic approaches that are tailored to the political context. In many countries, violence against female politicians sits at the intersection of different of social and political challenges: institutionalized sexism and traditional gender norms, high levels of impunity and weak rule of law, and the normalization of political and criminal violence in everyday life. Ensuring women’s full political participation in these contexts requires tackling these challenges in parallel while paying attention to the linkages between them—certainly no easy task. In established democracies, the focus primarily rests on fighting online and offline harassment while challenging the broader sexist assumptions and structural barriers that continue to undermine women’s political advancement.

What links these contexts is the need to challenge the underlying culture of impunity that enables violence and harassment to be brushed aside. Better data collection and continued awareness-raising thus represent key priorities, as do efforts to institute strict codes of conduct and accountability mechanisms within parliaments and political parties. For gains in political representation to be sustainable, it is crucial to take women’s experiences seriously—and advance protection strategies and initiatives to fight back against the inevitable backlash.

Saskia Brechenmacher is an Associate Fellow in the Democracy and Rule of Law Program at the Carnegie Endowment for International Peace.

[3] Berry, Bouka, and Kamuru, “Kenyan Women Just Fought One of the Most Violent Campaigns in History.”

[13] Jennifer M. Piscopo, “The Challenges with Legislation as Enforcement: Rethinking Responses to Violence against Women in Politics,” presentation delivered at the International Seminar, “Violence in Politics against women in Latin America: Diagnostics, Dialogues, and Strategies,” held in Mexico City from November 11-13, 2015, 4.