The devastating conflicts in Syria, Iraq, and Yemen have killed and displaced countless tens of thousands of people. They will continue to be this year’s primary points of concern for the Middle East and North Africa (MENA) region, which remains beset by political, security, and socioeconomic complexities and challenges.

Governments in Libya and Egypt will also face unique challenges as they chart dangerous courses toward unifying disparate polities, while the Palestinian-Israeli conflict looks set to become even more complicated as a new United States president seeks to set a new agenda in this volatile region over the next 12 months.

The Syrian conflict will likely persist through 2017 despite attempts at a lasting ceasefire and indications that Russia is seeking to draw down its operational footprint in the country following its role in securing Damascus and Aleppo. Non-state armed groups linked to the West, Turkey, or acting independently remain in place across the north, northeast, east, and south. Attempts at negotiating a settlement, possibly in return for the resignation of Bashar al-Assad, remain a possibility at talks slated to begin later in January in Kazakhstan; however, groups not part of the ceasefire, including the Islamic State, will remain spoilers. ISIS, for its part, will surely not negotiate and will continue to fight despite incurring significant losses in Iraq in 2016. ISIS may be repulsed from Mosul, its final major stronghold in Iraq, by the third quarter of 2017, but it will be undeterred in agitating for its ultimate goal of the establishment of its caliphate. Whatever remains of the group in the second half of the year will likely go to ground and seek to reignite an insurgency in predominantly Sunni regions across the Arab world. 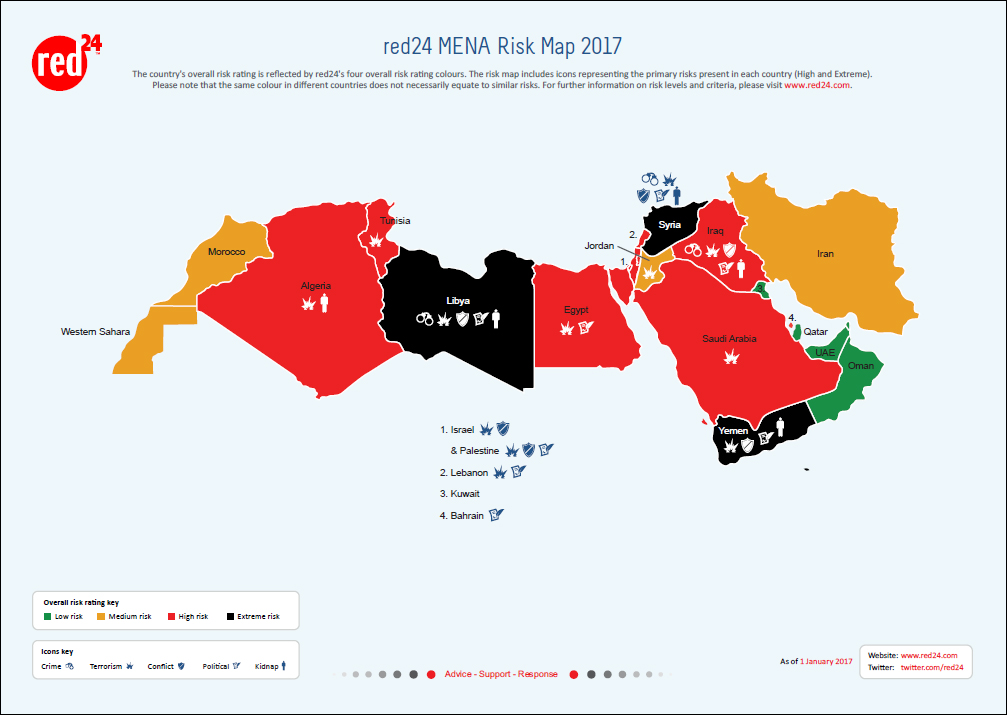 Iraq’s struggles will also not end with the liberation of its major cities. The ISIS advance in 2014 has provided the Kurds with the opportunity to reclaim disputed territory and significant oil reserves, particularly around Kirkuk. Negotiations between the central government and the Kurds over these territories will be drawn out and could be the source of future conflict. If the Kurds do withdraw, it would be following significant concessions, including greater autonomy. Iran and Turkey would also need to be involved in any talks as they hold the key to the success or failure of any future Kurd state in northern Iraq. Both are battling Kurd insurgencies in their border areas but have close alliances with Iraqi Kurd political groupings. Balancing these various groups will come on the backdrop of a persistent Sunni insurgency and demands by Sunni governorates for autonomy akin to that enjoyed by the Kurdistan Regional Government.

Yemen’s problems are numerous. At present, the country is divided in two with an Iran-backed Houthi and former leader Ali Saleh-supporting alliance holding the capital, Sanaa, and a Saudi Arabia-led coalition holding the southern port of Aden and territory extending along the southern coast and up into Marib governorate. Negotiations aimed at ending the fighting collapsed in late 2016 and there remain slim prospects for peace with both sides seeking total victory. Saudi Arabia, in a years’ long battle for supremacy with Iran in the region, is unlikely to draw down given Yemen’s proximity to its southern border. Only significant losses, including of their Red Sea resupply ports or major cities, would lead the Houthi-Saleh alliance to negotiate. The menacing presence of al-Qaeda in the Arabian Peninsula and ISIS, which continues to coordinate bombings in the country, remain a persistent secondary security concern.

The Israeli-Palestinian conflict is expected to gain renewed attention in 2017 following the election of incoming US President Donald Trump. The Trump administration has made it clear that it supports the controversial establishment of a US embassy in Jerusalem. Furthermore, its proposed next US Ambassador to Israel, David Friedman, is known to support Israeli settlement construction in Palestinian territories.

Trump’s actions could ratchet up tensions and sow the seeds for further conflict, either between Hamas and Israel, or even between Israel and Lebanon-based Hezbollah. Tensions in the West Bank and Jerusalem, already at heightened levels due to settlement expansion and low-level knife attacks of recent years, could explode, leading to unrest that rivals the Palestinian intifada of years past. This forecast is dependent on the current Israeli regime remaining in place and conservatives holding significant sway in the Knesset and cabinet.

In North Africa, Libya remains a stand out concern. While ISIS has been routed from Sirte, the country remains deeply divided. Just recently, on January 12, the former General National Congress, rebranded as the Government of National Salvation, under Khalifa Ghwell, once again sought to seize power in Tripoli from the UN-backed Government of National Accord (GNA). Ghwell represents a body seeking an internal Libyan agreement and one that excludes foreign organizations, including the United Nations.

Further east, the House of Representatives (HoR) maintains its dominant regional position and is nearing the total defeat of Islamist militias in Benghazi. It has refused to accept the GNA while its position on the Ghwell administration is unclear. With geopolitical support from Russia, the HoR is likely to remain a thorn in the side of UN and Western efforts to establish a stable and all-inclusive government. The instability forecast for the year will undermine efforts at state-building and repair, which remains critical to offset popular dissatisfaction with governance structures and what may be a resurgent Islamist extremist threat, both from ISIS and al-Qaeda-linked groups based across the Sahel.

Finally, Egypt’s North Sinai insurgency continues to rage. The government has dedicated vast amounts of men and resources to eliminate the militant threat and issues regular statements indicating that large numbers of militants have been arrested or killed. Yet, violence persists. On January 9, ISIS’ Wilayat Sinai faction conducted a complex bomb and gun assault on police personnel in El-Arish, leaving several dead in a stark reminder of the threat the group poses. This insurgency, continued economic decline, and a controversial island deal between Egypt and Saudi Arabia continue to chip away at popular confidence in President Abdel Fattah al-Sisi’s regime. While the military clique which dominates the Egyptian state will retain power, internal fractures could see Sisi removed while domestic opposition from a restive street and the banned Muslim Brotherhood will set the stage for further Arab Spring-like unrest in the coming years.