Fighters loyal to the Tripoli-based Government of National Accord engage in operations against ISIS. Sirte, Libya, June 23, 2016. (Stringer/AFP/Getty Images)

The advancement into Sirte and surrounding areas by Operation Bunyan Marsous (“Solid Structure”) forces from May to June this year inflicted a major setback on the Islamic State (ISIS) within Libya. Led by the country’s new Government of National Accord (GNA), the operation recaptured several key locations. It also positioned the GNA as the dominant actor in determining the future landscape of the conflict and points to the potential for domestic forces alone to drive Libya’s ongoing stabilization.

The race to liberate Sirte, which was seized by ISIS in February 2015, created potential competition between the GNA and a rival administration based in Tobruk, as well as their respective fighting factions. Prior to the Sirte offensive, commentators debated whether an international military intervention to stop the spread of ISIS would promote stability or fuel further fragmentation of armed groups. However, the progress made in recapturing the jihadists’ stronghold appears to have reduced the immediate necessity for external action.

Information on Libya from the Armed Conflict Location & Event Data Project reveals a pattern of relative stability over the past year (see Figure 1). While government forces have regained control of an increasing number of locations in 2016, these shifts have not translated into dramatic changes in the level of overall political violence. A look at the identities of the perpetrators of this violence up to May 2016 instead suggests that Libya is entering a transition stage in which splintered political groups are beginning to coalesce, shifting the balance of power back towards a bipolar conflict. 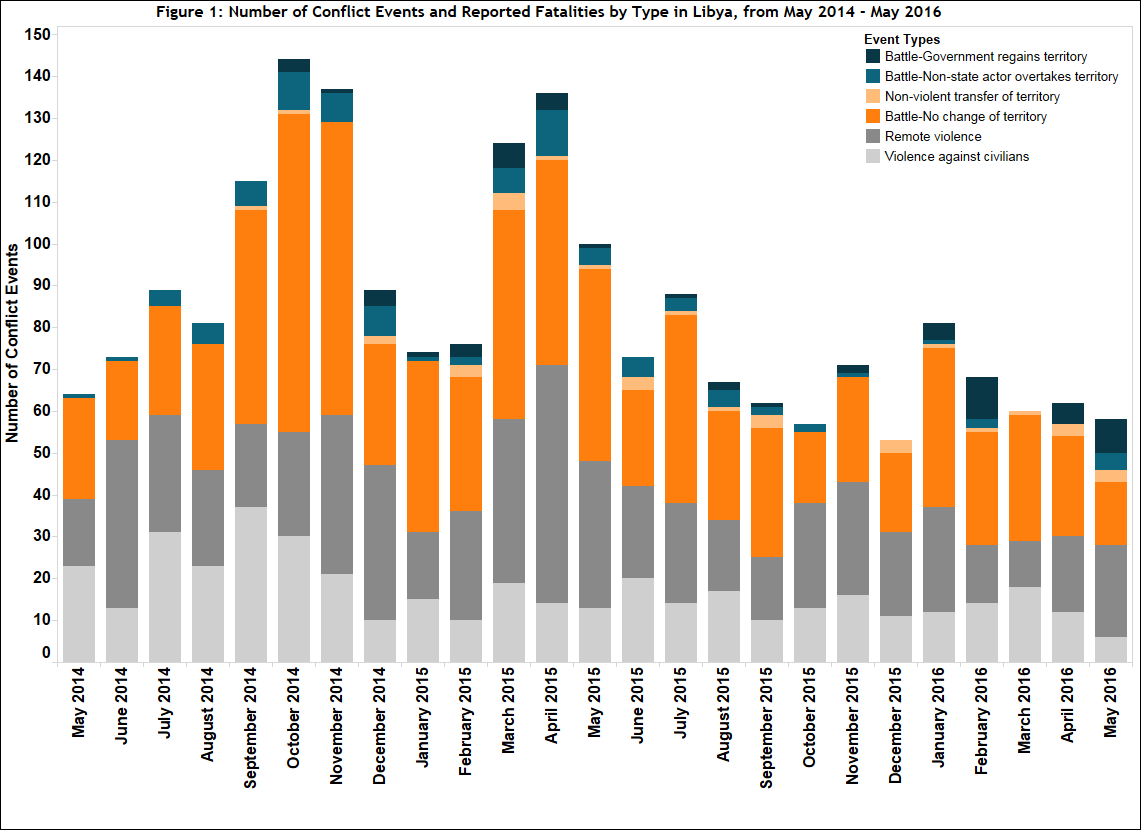 Two recent developments support this hypothesis of stabilization: the first is an increase in the number of discrete military forces and successful battles in which territory has been ceded to government forces; the second is an increase in low-level political militia activity in Tripoli, suggesting an attempt by armed brigades to be “bought in” to the emerging political settlement. Contrary to speculation, these dynamics reveal that political forces on the ground have taken steps to mitigate against further fragmentation and that this process has occurred organically, without the deployment of international forces.

The defeat of ISIS and the liberation of Sirte represented a major source of competition between General Khalifa Haftar’s Libyan National Army forces and militias from Misrata (the latter now operating under the new umbrella of the GNA). The takeover of Sirte was an opportunity to gain symbolic legitimacy and material spoils for the predominant faction.

Commentators have argued that this internal competition could have led to further fragmentation of the already unstable political alliances characterizing Libya since 2011. Yet before the latter offensive gained momentum, two trends were clear: first, in the period from March to May this year new military formations were created across the whole of Libyan territory, reflecting the push by the GNA to consolidate power into a formalized army structure. This facilitated the establishment of a presidential guard, tasked with securing vital institutions for the GNA as it was installed in Tripoli. Second, the creation of Operation Bunyan Marsous dramatically increased successful territorial confrontations in May 2016 as the forces supporting the unity government carried out a military assault against ISIS forces in Sirte (see Figure 1).

While operating as a de facto military force, the fighting groups that support the GNA comprise militias predominantly from Misrata and Al-Jufra and are further supported by—but not integrated with—the Petroleum Facilities Guard commanded by Ibrahim Jadhran. By contrast, the rate at which new political militias engaged in the conflict between March and May this year was lower than the periods from September 2015 to February 2016 (see Figure 2). This might suggest that local militias’ interests are moving away from controlling power in peripheral territories and towards Tripoli as the major center of power. 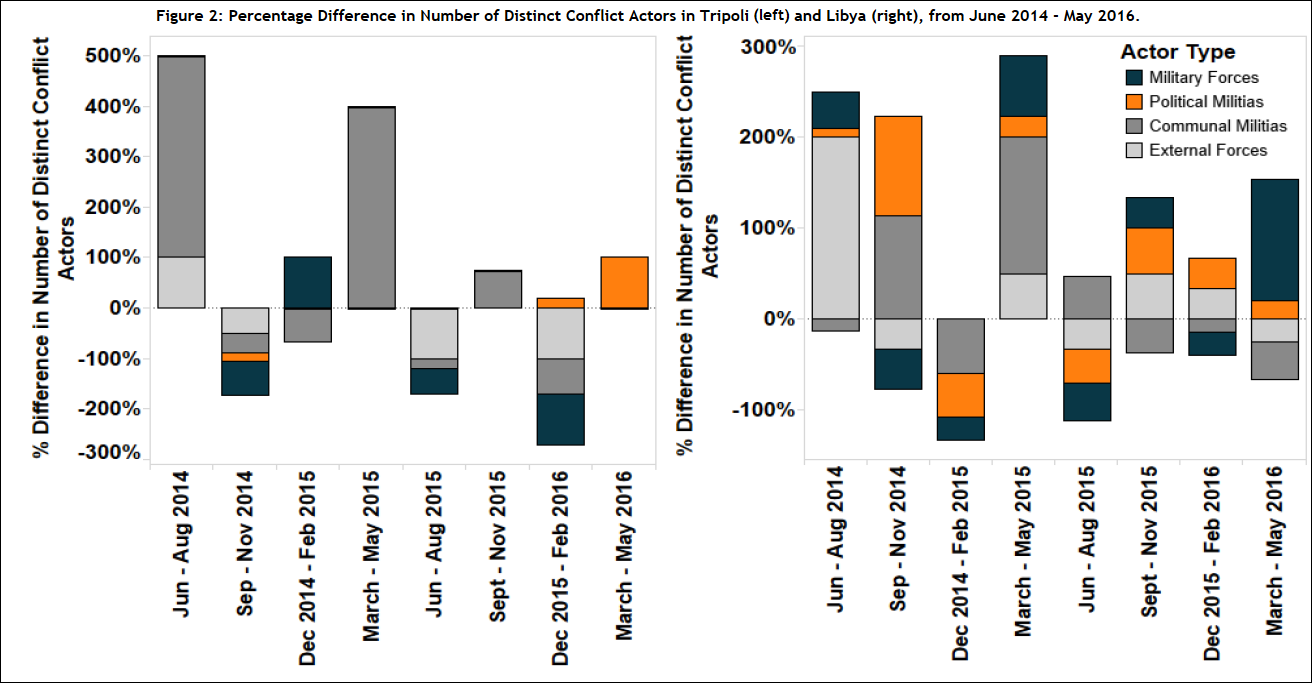 It is also clear that there has been an increase in the number of political militia groups becoming active in Tripoli following the signing of the Libyan peace agreement on December 17 2015 (see Figure 2). The agreement paved the way for the formation of the United Nations-backed GNA, headed by Prime Minister Fayez al-Sarraj. The number of active political militias increased by 20% during the period preceding the installation of the unity government in Tripoli, from Dec 2015 to Feb 2016, and by a further 100% in the following three months. This second escalation of militia activity is particularly pertinent given that it coincides with the arrival of the Presidency Council in Tripoli on March 30.

The emerging conflict pattern is largely localized to Tripoli and has been characterized by street battles between rival militias and increased rates of political kidnappings and cuts to power supply. Perpetrators of the violence include the Bab al-Tajoura Brigade, Tripoli Revolutionaries Brigade, and Abu Salim Brigade. This violence may indicate the desire of militia leaders to be included in the emerging political settlement, as al-Sarraj works to build a unified military force and international powers work to lift a Libyan arms embargo.

The political process unfolding in Tripoli will thus continue to influence Libya’s stabilization. An inclusive and durable settlement orientated to reconciling the several warring factions and avoiding the mistakes made during the political transition of 2012-2014 will be key.