One of the foundations of Ghana’s much-touted democracy is on the verge of crumbling after 12 high court judges, 22 lower court magistrates, and over 100 judicial service personnel across the country were captured on video collecting bribes, extorting money from litigants, and negotiating the release of persons standing trial in their respective courts.[1] The West African country—governed by a single constitution since 1992, after many bouts of post-independence coup d’états and authoritarian regimes[2] —is ranked the 7th best in overall governance in Africa in the 2014 edition of the Ibrahim Index of African Governance, which credited it with very high scores on safety, rule of law, and national security. The video was premiered for public viewing on September 22, 2015.[2a].

This latest revelation smacks in the face of accountable governance and is a confirmation of increasing perceptions of corruption among the judiciary, the police, and the seat of government, according to latest Afro-barometer surveys conducted by the Centre of Democratic Governance. The barometer indicators and other forms of public grievances against the judiciary have remained speculative until now. A painstaking two-year investigation by Tiger Eye PI, an Accra-based private investigative company led by Anas Aremeyaw Anas, has made alarming revelations of massive corruption, secret justice-for-sale deals, and scheming of judges and judicial service personnel allegedly negotiating the release of criminals. These were contained in secret video recordings that have the potential to lead Ghana into an abyss of confusion and instability – the hallmark of many African countries.

The revelation alone is not the main cause for worry, but also the wrangling for concealment vis-à-vis public outcry for the video to be made public;[3] uncertainties about the fate of the implicated judges; and legal battles initiated by some of the judges against the state, Chief Justice Georgina Theodora Wood, and Tiger Eye PI. There is also the uncertainty regarding the fate of those criminals who were allegedly freed by the accused judges upon payments made by the Tiger Eye team in the course of their investigations. While the Ghanaian public is eager for action against the accused, and insist on following such penal actions closely, the 1992 constitution stipulates that trials of judges can only be done out of the public eye, in chambers.

To make matters worse, some of the accused judges are challenging the legitimacy of the administrative investigative procedures initiated by the chief justice against them,[4] arguing that the Ghana’s constitution protects them against administrative inquiry except when they have been charged with criminal offense. Obviously the video alone does not provide enough proof for any criminal investigation yet. Portions of the content of the video have since been transcribed and published in various national dailies and online platforms, which itself has become subject of contention in court by some of the accused judges.[5] The legal battle is likely to be long and tense. This will feed on speculations that the judiciary is out to protect its own, unless the chief justice, the attorney general, and all stakeholders constitutionally mandated to act are seen to be proactive and interested in the issues; and so far they are.

The current situation is obviously a test of the responsiveness of state institutions, and the judiciary could emerge either weaker or stronger, depending on how the systems and processes activated eventually win public confidence in institutions of state. The judiciary ought to emerge stronger if Ghana’s democracy is to survive. If goal 16 of the proposed United Nations Sustainable Development Goals (SDGs) is to be met, where “justice for all,” “effective, accountable and inclusive institutions” are to be sustained and enhanced in Ghana, the judiciary necessarily has to be on top of its mandate.

The judiciary is not just an institution of state, but one of the three arms of government as defined by Ghana’s constitution, and the final point of call for ensuring rule of law. It is the last resort for settling disputes among citizens and between the citizens and the state. A typical example of the instrumentality of the judiciary in sustaining national stability is the settling of a landmark electoral dispute in 2013, between the main opposition party in Ghana, the New Patriotic Party (NPP), and the ruling party, the National Democratic Congress (NDC), after the 2012 general elections.

The legitimacy of the judiciary is even more critical in Ghana today, at a time when the world is experiencing growing deterioration of social norms that govern violence, an example of which was witnessed during the Arab Spring. Sustaining legitimacy of state institutions is paramount to the very existence of the state. Effective dialogue between institutions and citizens, and responsiveness of the state to its people are important ingredients for upholding the relevance of the state, in line with the principles of a social contract—or else risk a return to the jungle rules of survival of the fittest. 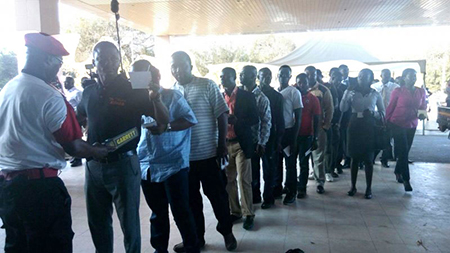 Ghanaians line up for security screening before viewing the video, which was shown on September 22, 2015.

Other recent events have put additional stress on the citizen-state relationship, and this judicial scandal adds fuel to the fire. The National Security of Ghana and peace and security wings of regional bodies like Economic Community of West African States (ECOWAS) and African Union (AU) should pick up early warning signals of political unrest. Although demonstrations and industrial strike actions are legitimate means of expressing grievances in Ghana, latest trends and government’s unmeasured responses could rock the boat. The nonchalance of public officials for grievances of the populations, prolonged neglect of striking essential service providers like medical doctors, and growing police repression and brutality against demonstrators in the last few years depict growing tension and dissipation of the standard norms that govern the use of civil action in the country. There is growing discontent about government’s handling of the economy, as evidenced by fast depreciation of the Ghanaian currency, higher inflation rates, increasing rates of youth and graduate unemployment, deteriorating living conditions of peoples, and a protracted energy crisis dabbed “dumsor” in local parlance. The government’s handling of reported cases of corruption against state officials, especially the famous Wayome scandal, is also causing animosity among the populace.

Ghana cannot afford any further sinking of legitimacy of state institutions at this time; much less the judiciary that now has the integrity of some 10 percent of judges questioned. Chief Justice Wood’s swift decisive probe into the allegations of corruption is commendable; but did she follow due process? The fact that she set up a judicial committee instead of appointing a high court judge to examine allegations for establishing prima facie case, as stipulated by the constitution, has been heavily criticized, and has led to some lawsuits. Until proven guilty by a court of competent authority, the accused judges and judicial service workers have rights that ought to be protected. The legal and administrative processes unleashed so far promise to be a long one, but systems and institutions ought to be allowed to operate efficiently and effectively without prejudice.

Four ultimate goals should guide the process. First, the right of every individual must be preserved at all costs. Second, state institutions must work in order to prove themselves worthy of their sort and to regain some confidence from the populace. Third, complete overhaul of the judicial system must be initiated after the dust settles, which must include background checks on persons before being appointed to the bench. There must be enforcement of regulations that mandate judges to write out their judgements prior to giving a verdict in court, and should make these available to legal representatives soon after delivery. Fourth, lasting impression should be left in the minds of ordinary people in such a way that, when all is said and done, confidence would be restored in the judiciary. People must not harbor the impression that the judiciary is set to defend its own.

Much beyond the need for judiciary reforms is the urgency for wider constitutional reforms. The tight working relationship between the legislature and the executive, for instance, must be amended, if not already taken care of by the long-awaited constitutional review process which has almost stalled. The present constitutional arrangement that makes it mandatory for the president of Ghana to appoint at least 50 percent of cabinet ministers from parliament leaves room for mediocrity and corruption, as it compromises the oversight responsibility of the legislature.

It is commendable to note that the new Whistle Blowers Act of Ghana adequately provides immunity to the investigative team that uncovered the corrupt practices in the judiciary, something they have been relentless at doing in the past fifteen years. Comments from prominent people, opinion leaders, the presidency, the chief justice and ordinary persons appear to converge around a common theme that shows repugnance for the actions and omissions of those implicated, and collective interest in getting things right. These must be guided by due process to build trust if the state is to remain legitimate in the eyes of people.

Clement Sefa-Nyarko heads the research unit at Participatory Developments Associates Ltd in Ghana, and is an alumna of Peace and Security fellowships of the African Leadership Centre and the International Peace Institute.

[1] Major newspapers in Ghana reported this scandal after video evidence was presented to the President and the Chief Justice by a private investigative firm, on September 9 2015. See for instance, ‘Bribery Scandal Rocks Judiciary’, Daily Graphic, Wednesday September 9, 2015, p. 3

[2] Ghana had independence in March 1957, and saw six military coup d’etats until the present constitutional regime initiated in 1992, often referred to as the Fourth Republic.

[2a] Earlier on that day, Justice Dery withdrew the suit for interlocutory injunction that sought to restrain Tiger Eye PI from showing the video to the public. He has however indicated his intent to head to the Supreme Court to restrain the use of the publicly aired video as evidence against any of the accused judges, in line with Article 146 (8) of the constitution of Ghana.