President Dilma Rousseff during the announcement of her re-election. (Ichiro Guerra/Flickr)

When I lived and worked in military-ruled Brazil as the Rio de Janeiro bureau chief of The New York Times three decades ago, the common lament was that the prosperous industrialized south enjoyed European living standards while the poor, underdeveloped northeast subsisted at third-world levels. Since then, the country has become a robust democracy with a greatly expanded middle class, an internationally competitive economy that is the world’s seventh largest, and a reputation as a leading emerging power.

Yet the just concluded vote that earned Dilma Rousseff, 66, a second four-year term as president has also produced a divided country that, if anything, is even more geographically polarized than the one in 1985 when the military left power. This week’s electoral maps of the continental-sized country paint the north in solid red and the south in uninterrupted blue.

The north—poor, less educated, more rural, and beholden to government assistance—voted overwhelmingly for Ms. Rousseff, the populist Workers Party candidate and chosen successor to President Luiz Inácio Lula da Silva. In his two terms in office before her, he pioneered a widely admired cash transfer program called Bolsa Familia that helped lift 40 million Brazilians, many of them residents of the northeast, out of poverty.

The south—with Latin America’s business capital São Paulo at its heart and accounting for 62 percent of Brazil’s 2.4 trillion USD gross domestic product—gave two thirds of its vote to the centrist Social Democratic Party candidate Aécio Neves. He campaigned on a promise of restoring growth to a once-booming economy that stalled during Ms. Rousseff’s four years and has just marked its second consecutive quarter of negative growth—the technical definition of a recession. 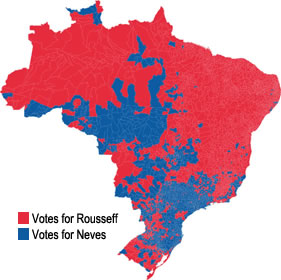 Results map of the second round of Brazil’s 2014 presidential election, by municipality. (Wikipedia)

The October 26 runoff election was the closest and most vituperative in recent history with a 51 to 48 percent outcome, prompting accusations of class warfare politics as the Workers Party portrayed Mr. Neves as the “candidate of the bankers” and sought to persuade beneficiaries of the social gains under Mr. da Silva that Mr. Neves would take them away.

“The insistence on this division, so exploited by the Workers Party to keep itself in power, is a very dangerous recipe for preserving democracy and calm in our country,” said Rubens Barbosa, a former diplomat who now writes a column for O Estado de São Paulo.

For his part, Mr. Neves pointed to a number of widely publicized cases of government corruption and the Workers Party’s poor record of delivering on its promises that caused mass anti-government street protests in a number of Brazilian cities in July of 2013 and caused tens of thousands of fans to boo Ms. Rousseff as she inaugurated the World Cup games in São Paulo this summer.

“I don’t believe this election divided the nation,” Ms. Rousseff declared in a triumphalist election night victory speech in which she notably did not mention her defeated rival, Mr. Neves. At the end, however, she did say, “I am prepared for dialogue.”

Disputing whether she was capable of that was Ricardo Noblat, a widely read political blogger in Rio de Janeiro, who characterized her as a charmless and bossy technocrat with no bent for schmoozing. “Based on how she acted in her first term, she would have to completely reinvent herself,” he said.

O Globo columnist Miriam Leitão, noting that Ms. Rousseff’s margin of victory was 12 points in 2010 and only three this time, said, “She won, despite the economic stagnation, soaring inflation and the worst case of corruption in memory, but she will have to be able to acknowledge her errors and the schism her campaign opened up in the country if she wants her second term to be better than her first.”

Her greatest challenge will be taking action to reinvigorate the economy where she has been faulted for interventionist management of state-run companies and imposing price controls on fuel. During the campaign she promised to replace her finance minister, but she has not done so and word of whom she might bring into the job is eagerly waited in the once-thriving business community where concern is high over a growing budget deficit, falling foreign investment, plunging stock prices, currency depreciation, and the possibility of a credit rating downgrade next year.

The Central Bank sees gross national product growing only 0.60 percent this year, down from 2.3 percent in 2013, and inflation is running at 6.75 percent, two full points above the government’s target.

Another major test will be how she handles the headline-making scandal over a huge bribery scheme at Petrobras, the giant state-controlled oil company that she once presided over. A former Petrobras executive is currently giving testimony about how he channeled three percent of the company’s proceeds directly to the Workers Party campaign fund. When in the days before the election, the nation’s leading newsweekly Veja reported that both Ms. Rousseff and Mr. da Silva had known of the arrangement, her response was to try to bar publication of the offending article and then to declare that she would take the editors to court.

Vigorous campaigning in the closing weeks of the campaign by Mr. da Silva is thought to have provided the charisma-challenged Ms. Rousseff the last minute surge she needed to overtake Mr. Neves in the polls and win the election.

Mr. da Silva, 69, served two terms as president and was constitutionally barred from running for a third consecutive term, but he is free to run again for President in 2016, and he has hinted that he might like to.

Workers Party opponents have been quick to point out that that raises the prospect of 24 continuous years of one party rule.

Warren Hoge is Senior Adviser for External Relations at the International Peace Institute.