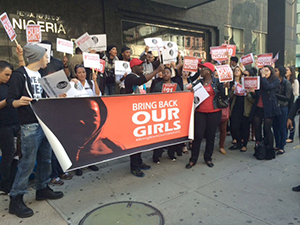 Demonstrators outside the Nigerian embassy in New York, October 14, 2014.

Boko Haram’s April 14 kidnapping of more than 200 schoolgirls from the northeastern town of Chibok has been one of the most provocative developments of its almost five-year insurgency against the Nigerian government. It has catalyzed a global protest campaign, drawing support from many of the world’s most influential citizens. It has aided the Nigerian government in garnering both regional and international assistance in its ongoing fight against the Islamist extremist sect. It has also placed unprecedented pressure on the Nigerian government to act with a decisiveness and rapidity which has been sorely lacking in its response to the insurgency.

Yet six months to the day, the Chibok girls remain hostages of one of the most brutal insurgent groups on the African continent, and not much more is known about their plight today as was speculated at the time of their abduction. A burning question remains unanswered: What will happen to the Chibok girls?

On May 26, about five weeks after the kidnapping, the BBC reported that the Nigerian government had rescinded on a deal which would potentially have resulted in the release of some of the Chibok hostages. According to the BBC’s Nigeria correspondent, Will Ross, Nigerian officials had been negotiating with Boko Haram via an intermediary who had visited the location where the girls were being held. Ross further asserted that a deal had been brokered which would have seen as many as 100 militants being released in exchange for some of the Chibok students. Yet, at the eleventh hour, the Nigerian government allegedly recanted on the deal without providing any explanation.

The entire situation was perplexing. From the onset, a hostage exchange agreement was considered as the most likely conclusion to the Chibok kidnapping. Apart from being the most pragmatic solution to the crisis, the Nigerian government and Boko Haram were no strangers to the bargaining table and had negotiated successful prisoner swap agreements on a number of previous occasions. In view of this, what could have possibly motivated President Goodluck Jonathan’s regime to pull the plug on possibly the best, if not only the chance, at securing the safe release of the girls?

For one, despite what is being reported, a hostage exchange agreement may very well still be on the table. The possibility exists that the Nigerian government may have or could still be in the process of negotiating an agreement with Boko Haram which will see a clandestine prisoner exchange take place. The Nigerian government may even be brokering a deal which would see the girls released under the pretense that they were “rescued” by the Nigerian army—a claim which would be given credence by recent claims by the Nigerian military that they know the exact location of the girls. In exchange for Boko Haram compliance, captured militants will likely be released to the sect without public disclosure. Such an outcome would be a win-win situation for the Nigerian government as it would not only see the hostages freed without any concessions, but could potentially see the beleaguered Nigerian military prevail as rather unlikely heroes.

While this theory may seem somewhat far-fetched, such a deal may have been brokered between Boko Haram and the Jonathan administration before. In one of Boko Haram’s first reported kidnappings of Nigerian civilians, the sect abducted a group of 12 women and children following an attack on a police barracks in the city of Bama on May 7, 2013. Boko Haram leader Abubakar Shekau claimed responsibility for the abduction which he said was a reprisal for the earlier detention of as many as 100 Boko Haram wives and children, possibly including relatives of the Boko Haram leader himself. Just over two weeks later, Brigadier Chris Olukolade claimed that the hostages had been “rescued” by the military who were conducting counterterrorism operations across the Bama region. However, the fact that the victims were freed a day after President Jonathan had ordered the immediate release of Boko Haram detainees cast serious doubt on the veracity of Olukolade’s claims.

Another possible theory is that the Nigerian government may have just temporarily suspended negotiations with Boko Haram. The acute domestic and international focus on the Chibok kidnappings has undeniably placed the militant group in a strong bargaining position. With calls for the release of the Chibok hostages continuing, and options available to achieve this feat limited, Boko Haram’s demands were always likely to be excessive, if not unattainable. Although much has been said about how the safe release of the schoolgirls could be a watershed moment for Goodluck Jonathan’s political future, the Nigerian president will be well aware that the conditions leading to the aforementioned outcome could be equally as pivotal. Too many concessions by the Nigerian government will only precipitate calls by its detractors that it has lost control of the Boko Haram insurgency—accusations which an already fraught regime can ill afford at this time. By withdrawing from negotiations, Jonathan may have sent a message that he will not, or simply cannot, be strong-armed at the negotiating table and will require terms of agreement which are not incongruent with his political longevity.

Launching a rescue operation to free the hostages may be another option at the Nigerian government’s disposal. However, precedent suggests that such an undertaking comes with significant risk. To date, there have been two known instances where the Nigerian government has launched security operations aimed at liberating hostages kidnapped by suspected Islamist militants. The first involved British national Chris McManus and his Italian colleague Franco Lamolinara, who were abducted from their residence in the northern Nigeria city of Birnin Kebbi on May 12, 2011. The second incident involved German engineer Edgar Fritz Raupach who was kidnapped from the northern city of Kano in January 2012. In both instances, the hostages were executed by their captors during failed rescue operations by Nigerian Special Forces. With more than 200 girls being held hostage in potentially multiple locations, the deadly conclusion of the aforementioned incidents should highlight why an aggressive rescue mission is not a feasible solution to the Chibok hostage crisis. Any such attempt, unless executed with near impossible precision, runs the risk of turning into a bloodbath—an outcome which could shake the very foundations of the incumbent Nigerian regime.

Finally, and perhaps most disconcertingly, there is also the possibility that the Nigerian government has given up on securing the release of the girls. By all accounts, it appears that Jonathan’s decision to rescind on negotiating with Boko Haram was made following his attendance at a security summit held in the French capital on May 17. In a press conference held in the immediate aftermath of the summit, Jonathan for the first time publically declared Boko Haram as being an al-Qaeda branch. This may have been his attempt at absolving his government of its role in the spiralling violence, as well as legitimizing his subsequent decision to withdraw from further negotiations with the sect. After all, who can fault his regime for choosing not to cede to the demands of al-Qaeda? It is a terrorist organization which has prevailed as the pre-eminent threat to global peace and stability, and which, despite the efforts of global superpowers, continues to exploit, kidnap, and kill thousands of civilians across the world.

In Nigeria, Boko Haram continues to grow from strength to strength. In recent months, the sect has captured large swathes of territory in Nigeria’s northeast, the nadir of which was the sect’s August 2014 declaration of an Islamic caliphate centered in Borno state. As Boko Haram’s relative influence in Nigeria increases, so too will the sect’s bargaining power at any negotiating table. This does not bode well for the release of the Chibok hostages, given that, apart from negotiation, options available to secure the release of hostages are limited if not nonexistent. But while Jonathan may consider Boko Haram’s terms of agreement as untenable, and possibly counter-intuitive to Nigeria’s ongoing fight against the sect, he should perhaps be reminded that when one is standing on the edge of a cliff, taking a step backwards is often the only means of progress.