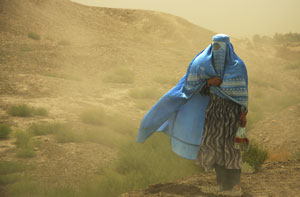 A woman stands in a sandstorm near Balkh, Afghanistan, April 24, 2012. (Wikipedia/Hochgeladen von Ottawa)

Rates of unemployment in Afghanistan are highest among women and young people. These two groups make up by far the majority of the population, but like young people and women everywhere, they often struggle to have a voice in the political system that could address their plight.

Farkhunda Zahra Naderi has been a member of Afghanistan’s lower house of parliament since 2010, when she was in her late twenties. Now 33 years old, Ms. Naderi sees increasing opportunities for young people and women to participate in politics and shape the future of their country as democracy takes hold. While traditional approaches to politics in the country still erect barriers to participation, today “you can come by means of your own power,” she said in an interview in New York on September 15, “because democracy opens the door for you.”

Despite the recent election deadlock and accusations of electoral fraud—now resolved with a unity government led by Ashraf Ghani, whom Ms. Naderi supports—democratic values are strong in Afghanistan today, Ms. Naderi said, since people risked their lives to vote in this election. “Now it’s the politicians’ job to actually bring democracy for them,” she said.

Ms. Naderi made the burqa central to her first campaign slogan, which she said provoked some controversy. “It has this small window, so my argument is that this small window is made to make the world so small for women and put them in a cage,” she said. “With education and knowledge, you can turn that small window into a window of power.”

What follows is an edited and condensed version of our conversation.

Why did you decide to get involved in politics?

I was always encouraged by my father to be a politician, but I really didn’t like the idea. So when people tell me that they don’t like politics, I really understand that feeling. I reasoned to myself, my father wants me to serve people, he wants me to do good things for people, and [initially] I was thinking I can do that by getting involved in civil activities, like working in an organization to help people. But eventually, those activities ended me up in parliament.

I belong to a family which is associated with leadership. But I do not believe that you have to be from a political family in order to get engaged into politics. What is really important for the younger generation of Afghanistan is that we go beyond that. I think knowledge is power. For many in the younger generations in Afghanistan nowadays, they study, and they can even see themselves as the president of this country one day.

And that’s why just the face of Ashraf Ghani is a revolutionary gesture to Afghan politics, because he doesn’t belong to the power of money, and he doesn’t come to power because of his father’s background. He doesn’t come by means of the previous war, the civil war, which saw many new war leaders emerge. He doesn’t belong to any of those backgrounds, so the main power in him is the power of knowledge and education.

I think these are the new stories that we have to give to Afghan people, to say that now if you study, if you work hard, and if you are really interested in bringing change to this world, you don’t need to belong to one of those powerful families. You can come by means of your own power, because democracy opens the door for you.

What are some of the barriers that young people face in getting involved in politics?

What is really needed is to recognize that positive change is already taking place in Afghanistan, and we have to fight for this new phase of changes in the country. I think what’s really important in politics is to challenge the traditional ideas when they are wrong. It doesn’t mean that all the traditional approaches are wrong, but the ones that don’t serve people’s needs or have a very discriminatory mentality.

In your 2010 election campaign, when you were first elected, what was your campaign slogan?

The main slogan that I had was “Burqa, the window of power.” Because one of the things that I do in politics is that I fight for women’s rights and especially for women’s participation in the Supreme Court of Afghanistan.

What did you mean by that?

You know, we call it chadari. It has this small window, so my argument is that this small window is made to make the world so small for women and put them in a cage. With education and knowledge, you can turn that small window into a window of power. Meaning that what is really important is not the burqa that women wear inside Afghanistan, but the women who are inside the burqa. So you have to pay attention to women, educate them, and let them do what they are going to do with the burqa. Their creativity will allow them to do anything.

And that was controversial because I didn’t only frustrate the fanatics and fundamentalists—even the modern ones were frustrated with me because they thought that I was encouraging people to wear the burqa.

My plan was that you can turn your weakness into your strength. So what Afghan women went through for three decades of war, they learned a lot. Women were the ones who were seeing, listening, watching—but they were not allowed to say anything. And I think the burqa really shows this image of women in Afghanistan. My plan was, [if] democracy gives you speech, then this is the time that women’s power can be felt everywhere.

What are the biggest challenges that Afghan women face?

The lack of education overall in Afghanistan is devastating for Afghan women. Because we have provinces where women know more about their rights than their husbands or brothers or fathers, and that creates a problem. When you don’t have a common language, when you know about your rights but others are ignorant, forget about accepting them. So education and awareness are the priorities—not only for women but also for men, so that they start believing in women’s rights and allow them.

At this stage, this is what Afghan women are facing. They know more than the time, the community, and the family allow them to know.

Where do you see democratic values in Afghanistan today?

First of all, I believe that the value of democracy doesn’t have any boundary in terms of different countries. It’s global. And even though it’s only been 13 years, in Afghanistan the values of democracy are very deep. During [this] election, Afghan people came to vote with the cost of their lives.

The second part is that there is a big story about fraud, and it shows that we have to work harder and that we have to do more for democracy, especially the politicians. We have to do more in terms of institution-building, in order to be answerable to the votes that people cast in the ballot. Because people showed their interest. Now it’s the politicians’ job to actually bring democracy for them.

Because security in Afghanistan means security in the world, but many other countries see a secure Afghanistan as a threat to them. And the more challenges that we face, the more I realize that it’s not only one or two people—there are groups of people who are really believing in democracy and who are fighting for democracy. So with all those players, Afghanistan is strong enough to fight for the values of democracy and still be hopeful that we can have a government that can serve the people.