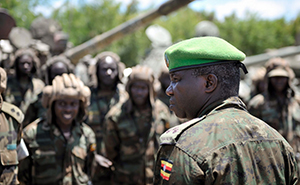 AMISOM’s Brig. General Dick Olum speaks to his soldiers before the launch of the military Operation Indian Ocean against al-Shabaab in the Lower Shabelle region of Somalia, August 29, 2014. (AMISOM/Tobin Jones)

On September 1, the leader of the Somalia-based extremist group al-Shabaab, Ahmed Abdi Godane, was killed in a US-led drone strike in an al-Shabaab stronghold in Somalia’s Lower Shabelle region. The drone strike coincided with an ongoing military offensive launched August 25 by the African Union Mission to Somalia (AMISOM) and Somali government forces in southern and central Somalia, dubbed Operation Indian Ocean.

Godane’s death and the simultaneous territorial losses faced by the group in the Middle and Lower Shabelle regions have raised various concerns over al-Shabaab’s response and how the militant group—which controls most of southern and central Somalia, and has carried out several terrorist attacks in the region—will function under its newly-appointed leadership. While the killing of Godane may represent a significant victory to some, the impact of his death may result in an increase in terrorist assaults in the region in the short term. Long-term implications are harder to assess.

In a statement released on September 6, al-Shabaab confirmed Godane’s death and named Sheikh Ahmad Umar Abu Ubaidah as his successor. Although very little is known about Ahmad Umar, what is apparent is that he had worked closely with Godane and supported him in both ideology and his jihadist objectives. Under Godane, al-Shabaab had become increasingly committed to al-Qaeda and the global jihad, shifting its overall rhetoric away from a nationalist agenda toward the group’s participation in al-Qaeda’s global Islamist campaign. The group’s decision to reiterate its commitment to al-Qaeda in the September 6 statement seems to indicate that the group’s immediate orientation under Umar will unlikely shift in ideology or objectives, and it is believed that it will not change its modus operandi nor result in a decline in its ability to conduct attacks.

Even prior to its recent losses, al-Shabaab lacked the capacity to combat AMISOM and government forces in conventional warfare, and these events make this even more so. In this increasingly asymmetrical conflict, terrorism is one of the few means of violence in al-Shabaab’s campaign. Thus, rather than this military offensive immediately hastening the demise of the group, we are likely to see, at least in the short term, an uptick in al-Shabaab attacks, many of which will be carried out under the guise of avenging Godane’s death. Since Operation Indian Ocean began, at least 24 people have died in two separate car bomb explosions orchestrated by al-Shabaab. On September 14, in Uganda’s capital, Kampala, 19 Islamist militants reportedly were captured and found in possession of explosives.

Al-Shabaab Over the Long Term

Whether or not these events will have an effect on al-Shabaab’s ability to function over the long term is less certain. Umar will have to work hard to consolidate his position as leader. Faced with significant losses during Operation Indian Ocean, al-Shabaab perhaps had little choice but to present a united front. Whether this unity is indeed a reality on the ground has yet to be fully revealed.

Despite its resilience, al-Shabaab has fallen prey to stifling infighting before. Although Godane was able to quell potential mutinies by prominent commanders such as Sheik Mukhtar Robow and Sheikh Hassan Dahir Aweys, it is perhaps too early to tell whether Umar will possess the requisite strength and support to face such internal belligerence. Nevertheless, al-Shabaab has proven its capacity to operate as a highly splintered organization and is likely to remain a key player in terrorist activity on the continent, at least in the coming year.

The establishment of the Security Governance Initiative (SGI) following the 2014 African Summit held in Washington, D.C. bodes well for a developing a roadmap to address insecurity, and specifically terrorism, on the continent. Yet, with an initial budget of only 33 million USD, and the requisite coordination between the US and the six participating African nations—namely Ghana, Kenya, Mali, Niger, Nigeria, and Tunisia—we are unlikely to see immediate results.

In the interim, government forces will need to significantly choke al-Shabaab cells in Somalia. In this regard, the success of the coordinated efforts of AMISOM, the Somali government, and US support is indeed encouraging. Prior to the drone strike, AMISOM forces had recaptured the strategic town of Bulo Barer in the Lower Shabelle region, as well as several smaller locations. Should the government forces continue to make such territorial gains, al-Shabaab is likely to stay on the backfoot, seeking to withdraw rather than confront military forces directly, and will likely conduct hit-and-run attacks.

Moving forward, a key objective for the government forces will be the seizure of al-Shabaab’s stronghold at Bararwe—the main supply point and source of revenue for the group. Although diaspora funding contributes to al-Shabaab’s operations, the group’s illicit charcoal exports from Bararwe’s port continue to generate the group’s main revenue.

Yet, with AMISOM forces set to depart Somalia in 2016, time is of the essence. Capturing the town will be vital to crippling the group’s financial capabilities. Facing an impending offensive on the city, al-Shabaab will need to make key decisions as to whether to secure Barawe and  concentrate its fighters and resources there, or secure a substitute funding source in the event that Barawe is lost, as it did following the loss of Kismayo to Kenyan armed forces in 2012.

Of course, with these events, one must be prudent in assessing al-Shabaab, as it is still reeling from Godane’s death. The reality is that both sides have challenges ahead. But this could be a turning point that determines the future of al-Shabaab.