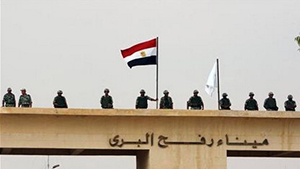 It’s been two weeks since Israel and Hamas reached an understanding to stop hostilities after 50 days of fighting that caused more than 2,150 deaths on the Palestinian side and 73 deaths on the Israeli side, and the ceasefire seems to be holding. Since August 26, the various Palestinian militias have not shot a single mortar or rocket against Israel, nor have the Israeli Defense Forces struck any targets within the Gaza Strip. However, the prospects of both sides resuming indirect negotiations in Cairo by September 26—which happens to be Rosh Hashanah, the Jewish New Year holiday—seem rather slim at the moment, due to increasing rumors that Hamas might be trying to rebuild its offensive tunnels network.

Moreover, under pressure from far-right members of his ruling coalition, Prime Minister Benjamin Netanyahu has declared his unwillingness to free the detainees who were liberated after the Shalit exchange in October 2011 and later re-arrested, as well as another two thousand Palestinians from the West Bank and East Jerusalem. The decision came in retaliation for the kidnapping and subsequent assassination of three Israeli teenagers on June 12 (the two main suspects in this triple crime, Marwan Kawashmeh and Amer Abu Eisha, remain at large). Netanyahu has also said that he won’t allow Gazans to build a seaport or reconstruct their airport, which were two of the main demands set by Hamas at the negotiating table in Cairo that would have transformed the current ceasefire into a long-lasting truce.

While humanitarian aid has started to flow into the severely devastated Strip—whose reconstruction might take up to ten years and cost more than $5 billion USD, according to Palestinian Authority Minister of National Economy and Deputy Prime Minister Mohammed Mustafa—and while the situation on the ground seems to be gradually under the control of OCHA, UNRWA, and other UN agencies, the political constellations have indeed worsened. So has the intra-Palestinian reconciliation track, after the Palestinian Authority (PA) blamed Hamas for executing dozens of suspected collaborators and for shooting Fatah members in the legs when they tried to defy house arrest during the war.

Need for an International Force

The Israeli Ministry of Foreign Affairs has recently submitted a classified document (the contents of which were reported on by Haaretz on Sunday) to the security cabinet with a proposal for stationing an international force in the Gaza Strip to monitor the rehabilitation of its infrastructure and to prevent the rearming of Hamas’ Izz ad-Din al-Qassam Brigades and other guerillas such as the Islamic Jihad’s al-Quds Brigades and the Nasser Salah al-Deen Brigades (the military wing of the Popular Resistance Committees). Israel’s foreign ministry believes that such a force could serve Israel’s national interest if it carries out effective security work in and around the Gaza Strip.

The two-page document, entitled “Principles and Parameters for Deployment of an International Force in Gaza,” was formulated in the context of ideas jointly submitted by the governments of the United Kingdom, Germany, and France during Operation “Protective Edge.” Its main purpose is to establish an international monitoring force in the Gaza Strip based on an upgrading of the European Union (EU) force that was stationed at the Rafah crossing point between November 2005 and June 2007 under the code name of EUBAM (European Union Border Assistance Mission).

Force Generation. The document presents four options: a European Union force; a Western force with membership of some European countries as well as the United States, Canada, Australia, and New Zealand; a United Nations force; and a NATO force. The Israeli Foreign Ministry recommended the EU option to the security cabinet, because it seems to be the most available one, and also because the Europeans have already shown their willingness, in principle, for such a move.

Mandate. The foreign ministry believes that the force’s mandate should be centered on rehabilitation and disarmament. According to the document, the force should be allowed to carry weapons and given enforcement powers that will enable it to deal with threats emanating from Hamas and other armed organizations. It should have the executive power to prevent arms from being smuggled into the Gaza Strip, and to confiscate them along with other prohibited items. It should also have powers in the field of humanitarian aid and rehabilitation, and should be able to inspect any UN and governmental facilities in the Gaza Strip to ensure they are not concealing weapons.

Deployment. The foreign ministry recommended that the international force be deployed at the Rafah border crossing, as well as all along the Philadelphi Corridor that separates the Gaza Strip from the Sinai (where the smuggling tunnels used to be located before they were systematically destroyed by the Egyptian Army in March 2014). Also, the force would deploy in certain areas inside the Gaza Strip—such as UN installations—in order to avoid its use either for launching rockets or for weapons storage (as it sometimes happened during Operation “Protective Edge”).

The European Union, in coordination with the Office of the Quartet Representative, has offered to take over responsibility for all the border crossings into the Gaza Strip—not only the Rafah crossing as the paper suggests, but also Erez, Karni, and Kerem Shalom—and to work together with Israel, Egypt, and the PA to prevent the smuggling of rockets, weapons, ammunition, and explosives. According to the EU’s assessment, the current ceasefire and the upcoming Cairo negotiations might not be enough to ensure a long-term and sustainable truce.

At its last meeting, the EU Foreign Affairs Council released a joint statement in which all 28 foreign ministers agreed that the status quo in the Gaza Strip is “not an option.” Prior to the recent election of her successor Federica Mogherini, the outgoing EU foreign policy chief Catherine Ashton had requested authorization to carry out further work with the PA, Israel, Egypt, and Jordan in order for the EU to have a stronger role in maintaining calm around the Gaza Strip. Ashton had also called for a stronger involvement in Gaza’s rehabilitation, primarily by means of a physical presence at all border crossings, which would also ensure the adoption of relief measures, as well as a guarantee for Israel’s security.

No one knows what will happen in two weeks once the real talks between the representatives of Israel, Egypt, Hamas, and the PA on the future of the Gaza Strip finally begin. Hamas has indeed taken a severe blow. Its rocket reserves have been depleted to less than 30 percent of what it had three months ago. Moreover, its smuggling capability was damaged even before the military campaign, due to the zero-tolerance policy adopted by Egyptian President Abdel Fattah al-Sisi towards Hamas in general, and its tunnel digging in particular.

Hamas, which was on the verge of economic and financial collapse prior to the war, also seems to be failing at mobilizing the necessary funds for the rehabilitation of the infrastructure and, indirectly, for the rebuilding of its rearmament capability. Thus, if the parties and the international community do not come up with a comprehensive solution by the end of October—once the sequence of Jewish holidays (Rosh Hashanah, Yom Kippur, and Sukkot) is over—hostilities could easily restart again, bringing more death and destruction to the already devastated Gaza Strip.