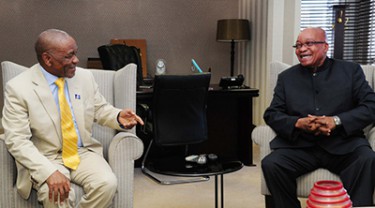 An alleged coup attempt in Lesotho a few weeks ago has put the regional hegemon South Africa in a very delicate position. This no doubt explains why President Jacob Zuma has been resisting calls from the Lesotho government for the Southern African Development Community (SADC) to provide military support to the beleaguered government in Maseru, Lesotho’s capital.

South Africa has a history in Lesotho, most notably the military intervention in 1998, when SADC troops (the vast majority South African) invaded Maseru in an attempt to curb post-election violence. More than 60 deaths later, with Maseru turned into a burned-out wasteland, the intervention was generally regarded as disastrous and deeply embarrassing to Pretoria. Consequently, military intervention is very much seen as the measure of last resort by South Africa, despite claims by the government in Lesotho that “the last resort” has already been reached.

The current situation’s immediate cause is the alleged attempt on August 30 by elements within the Lesotho Defence Force (LDF) to overthrow the government of Prime Minister Tom Thabane. The attempted coup, led by Lieutenant General Tlali Kamoli, saw the military attack several police stations and led to Thabane escaping to South Africa. One member of the Lesotho police service was killed, while nine others were injured. The police are seen as being loyal to Thabane (but ineffective), while the LDF’s allegiances are questionable and appear split.

Last week, Zuma brokered a peace deal that allowed Thabane to return to Maseru, with the reopening of parliament being an important first step to normalization. However, Thabane has now refused to recall parliament, claiming that the situation is too dangerous. This is crucial. The alleged coup attempt was in itself provoked by Thabane’s closure of parliament back in June, just prior to a vote of no-confidence against him. As part of the deal that led to Thabane returning to Lesotho, the prime minister had promised to reopen parliament by September 19. It is a serious setback that he has now reneged on this agreement, as the opposition party, the Lesotho Congress for Democracy (LCD), is adamant that parliament must be reopened and, no doubt, that the vote of no-confidence goes ahead. The LCD’s leader, Deputy Prime Minister Mothetjoa Metsing, is accused of being in league with Kamoli, although Metsing denies this.

The situation is now quite dangerous. Thabane is relying on a South African police detachment to protect him. Meanwhile, loyalist elements within the LDF are demanding that military action be taken against Kamoli, who is still at large. Lesotho’s army commander, Lieutenant General Maaparankoe Mahao, has publicly called for military operations to begin. However, this is unlikely to be easy, given that Kamoli is known to be in charge of at least 200 LDF dissidents and in possession of weapons including artillery, mortars, and small arms. Kamoli has in fact been seen driving around Maseru in uniform and with an armed motorcade. Police refuse to try and arrest him, claiming that it is too dangerous. Thabane has upped the ante by instigating a case of high treason against Kamoli, a charge that carries the death penalty and which is unlikely to assuage the crisis.

It appears that Thabane and his allies are seeking to provoke a military intervention by SADC, which would no doubt confront Kamoli and, at the same time, put the reopening of parliament (and the vote of no-confidence) on the back burner. This sort of politicking is a high-risk strategy which does nothing to address the root causes of the current malaise.

The backdrop to all this is Lesotho’s lamentable political economy. About 80 percent of the resident population are engaged in subsistence agriculture. Of the formal wage earners, about one in five work as migrant laborers in South Africa, while another one in five work in the low-skilled, low-pay garment industry, in mostly Asian-owned factories (the bulk of them are women). Unemployment runs at 45 percent.

The country is a classic example of underdevelopment and dependency, with Lesotho’s economy almost wholly dependent upon South Africa. The country really is not viable as an independent state, and talk of it being incorporated into South Africa has been up for debate since it was first declared a protectorate by the British back in 1868. Lesotho is basically a giant labor reserve. With no real economy, the political class is split down highly personalized lines and has not been shy of manipulating the military for its own ends. It is unlikely that the current crisis will resolve anything for the majority of Lesotho’s population.

Indeed, the political impasse may last. Thabane is not interested in reopening parliament as this would trigger the no-confidence vote against him. Meanwhile, Kamoli is unlikely to willingly surrender, given that a possible death sentence awaits him. A compromise where Kamoli is given amnesty (and perhaps asylum elsewhere) and the vote of no-confidence is dropped may be the best deal available. None of this, however, will sort out Lesotho’s structural problems, which are the root cause of the latest emergency in the mountain kingdom.