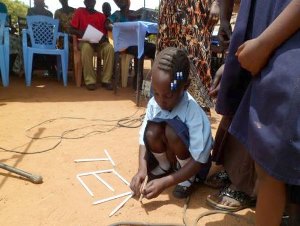 A girl learns to spell in Pageri, Magwi county, South Sudan during a celebration of International Women’s Day, March 8, 2014. Supporters hope her right to an education will be respected. (Steward)

National laws don’t protect girls from child marriage in South Sudan, but there are ways to get around this, according to Josephine Chandiru Drama, a former program manager at Steward, which supports the empowerment of women and their rights for development in South Sudan. Since family courts handle cases relating to child marriage and sexual and gender-based violence at the local level, programs that train traditional chiefs who manage these courts in human rights can make a difference in protecting and empowering women and girls in practice. This local work goes on even as the recent conflict has stalled the national constitutional review process that could pave the way for stronger legal protections.

Ms. Chandiru Drama, currently a fellow with the African Leadership Center of King’s College London, explained how the conflict in South Sudan has made girls more vulnerable to abuse and how the legal frameworks in South Sudan need to be changed in the long term. She spoke to me while participating in the African Junior Professional Fellowship Program at the International Peace Institute in New York. What follows is an edited and condensed version of our conversation.

What are some of the major challenges that women and girls face in South Sudan today?

We have enormous challenges that South Sudan women and girls face. First of all, we have issues to do with gender-based violence (GBV).  Among the top is early marriage, which has affected many of the girls—about 60 percent of the girls in South Sudan. We also have a challenge of lack of laws, particularly family law that protects the rights of women and gives them a way to negotiate their way into the community. We also have broken justice systems that are not ready to listen to the plight of women. And also socio-cultural practices that really undermine the participation of women in the way they have to do things.

What does the landscape of child marriage look like in South Sudan today?

We have a constitution that allows for marriage, but I think it deliberately leaves out the age of marriage. It says that anybody of marriageable age can marry, but this leaves it to the various traditional chiefs to determine the age of marriage of a girl. So you see a girl between 12 and 18 years of age normally taken out to marry someone who is either older than her age or around her age. And this is just because they need to get the wealth that this girl could bring to the family. So it is because of the issue of wealth that a girl is normally married at the age of 12 years.

How has the recent conflict affected this situation?

To me, the conflict has worsened the situation. The conflict separates girls from their families and leaves them unaccompanied, so the girls have become vulnerable. They find themselves in different centers for internally-displaced people, living alone. To survive, they may give in to sex just so to have food. They are prone to abuse by people who may not even marry them and are taking advantage of the conflict situation. So most of the girls are now unaccompanied and very vulnerable to abuse.

So if the legal frameworks aren’t there to protect girls, are there other ways to intervene?

Yes. At Steward Organisation in South Sudan, we have devised a way to make use of the family courts. These family courts are existing traditional courts that are managed by traditional chiefs. We have trained these traditional chiefs on the legal and human rights of women and girls but also on the human rights of all individuals. So, they handle cases related to women and also GBV. They handle these cases at least once every week with the attendance of a women protection officer, who is a staff member of Steward.

How do you approach these chiefs? Do you have to convince them, or are they very open to this?

We don’t really have to convince them. We tell them we are doing a sensitization training on the human rights of individuals, and we are looking for participants. Could they advise us, give us names of participants for the training? And they put their names on the list fast! Some of our participants have been women leaders, youth leaders, the traditional chiefs, the elders. The project has been going on since June 2012.

What are the biggest barriers that you see to protecting girls at the local level in spite of these trainings?

The reporting of cases is still very low, though the human rights activists are moving place to place trying to sensitize the community about the human rights of individuals, and particularly that upholding the rights of women and girls is very important for the community’s development. But also, another barrier is that the traditional chiefs still have tendencies to manage cases in their traditional ways, not leaving behind the socio-cultural beliefs. So we normally run refresher courses for them.

When our women protection officers do home-to-home visits to find out whether there are  women who have been abused who do not know that certain services exist out there, at least medical services, they are often harassed, particularly by the male partners of those women. We also face a big challenge in terms of being a women’s organization. The men really wonder where these kinds of women came from, as if they did not grow up in the community. It’s like we were raised without the values of the community. But we are just trying not to let the rights of women and girls be forgotten, for the development of a continent.

What steps can be taken to protect and empower girls and women in South Sudan over the long term?

When this recent conflict emerged, the country was going through a constitutional review process. The community has been approached and they are giving their views. We believe that when the constitution will be passed, we as women’s organizations are going to collaborate on having a family law for the protection of women and girls in South Sudan. We believe the family law will be a strong instrument that will uphold the rights of women in South Sudan. In the meantime, we are using the traditional chiefs and the family courts to see that the rights of women are still upheld in the community. But we are also pushing our government—which might take a long time—to ratify the Maputo Protocol, which can act as a law that can oversee the protection of women and girls in South Sudan, but also in Africa at large.