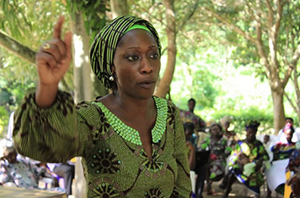 As conflicts continue to spread across borders in the Middle East and Africa, the state system in the summer of 2014 finds itself under exceptional stress. The system of international relations as embodied in the United Nations, the World Bank, and a host of continental and regional organizations provides the fundamental underpinning for a rule-based world order centered on principles of human rights, freedom, and the advancement, in the words of the UN Charter, of “the common interest.” It has taken centuries, as the political scientist Joseph Nye and others have pointed out, to develop the current international system with its interlocking commitments to these values and commitments.

The challenges presented by proponents of extreme violence such as the Islamic State in Iraq and Syria, al-Shabaab in Somalia, Boko Haram in Nigeria, and al-Qaeda in the Islamic Maghreb in Mali (among others) are not only challenges to specific states; they are challenges to the entire state-based system on which the overwhelming majority of the world’s people depend. The inability of the centralized state to address basic requirements of peace, security, economic livelihood and development, together with ethnic and sectarian discord, underlies the challenge of maintaining viable states, most notably in the Middle East and Africa. These challenges have to be confronted not only militarily, but by finding political solutions which respond to the needs of common people for some measure of control over their lives and destiny.

It is in this context that new attention is being paid to the search for federal solutions to tensions and unresolved conflicts within specific states. Federal institutions involve decentralization in contrast to centralized state control, which is often autocratic or dictatorial. The establishment of a federal or a confederal state requires a distribution of power among multiple centers, including devolution of decision-making authority and allocation of resources at provincial and local levels. The American constitution is among the best known examples of a federal system. The allocation of power and resources between the federal government and the fifty states is both a strength of US democracy (as it prevents excessive centralized decision-making) but also—especially in recent years—a source of contention over the appropriate level of authority and decision-making on issues as far ranging as taxation, marriage, gender equality, and access to contraception. Nonetheless, America’s federal system has proven remarkably resilient.

In Africa, Nigeria and South Africa work on federal principles. Nigeria’s 36 states enjoy a measure of local authority, including maintaining state governments and universities. Tensions however are high between the states and the central government in Abuja over issues of corruption, mismanagement, and failure to deliver services to people including in the Niger Delta and northeastern Nigeria, where Boko Haram has enjoyed significant support. South Africa’s constitution established nine provinces with a considerable devolution of power (Gauteng, KwaZulu-Natal, Eastern Cape, Free State, Limpopo, Mpumalanga, Northwest, Northern Cape, and Western Cape) compared to the four provincial governments under the apartheid system.

Currently, attention to potential federal solutions is focused on countries caught up in sectarian or ethnic violence, or in seeking to counter violent extremism, as in Iraq and Syria. In the August 14, 2014 issue of The New York Review of Books, Jessica Matthews notes that what is apparently a struggle about religion and military power in Iraq is actually “mostly about politics: access to government revenue and services, a say in decision-making, and a modicum of social justice.” The current struggle, she writes, reflects the failure to achieve political reconciliation among Shias, Sunnis, and Kurds. Various benchmarks agreed to five years ago when US forces pulled out, including equitable distribution of oil revenues and reversing the purge of Baathists from the central government, have never been carried out. In the United States, Leslie Gelb, former President of the Council on Foreign Relations, and US Vice President Joe Biden have made the same points. In their view, the only viable solution is agreement on some kind of confederal structure, with a new Shia-Sunni government in Baghdad sharing power and resources with the Kurds in the north. The Kurds already enjoy a great deal of autonomy in Kurdistan but are pressing for even greater control over oil resources and strengthening their own army (the peshmerga) given the weakness of the Iraqi army.

The resolution of conflicts in Somalia, Mali, and the Central African Republic could also depend on finding federal solutions to longstanding grievances. In Somalia, where the central government collapsed in 1991 and the federal government of Somalia has only been tentatively restored in 2012, preliminary efforts are underway to draft a new constitution. The key issue is whether this will be a federal state with a significant devolution of power and authority to the regions, or a centralized state. For much of Siad Barre’s 21 years in power (1979-1992), he engaged in clan warfare pitting his Marehan clan in the south against the Darods in the north. Against this background, many Somalis do not want to revert to another centralized government.

In Mali, the Ougadougou Peace Agreement of June 2013 called for the government in Bamako to negotiate with the separatist groups in the north, provided they renounced terrorism, and to address longstanding grievances pertaining to the marginalization and lack of economic development of the region. After over a year of on-again off-again negotiations, the parties have yet to reach durable agreements. The Bamako government remains intent on re-establishing state authority and security in the north while the Tuareg and other ethnic political groups continue to demand power sharing in decision making regarding the region’s economic development, investments leading to job creation, and improvements in living conditions.

Similar tensions persist in the Central African Republic which is essentially divided between the Christian anti-balaka groups in and around Bangui and the Seleka in the west of the country. At present, there is virtually no dialogue about possible federal arrangements, while the international focus remains on the deployment of a UN peacekeeping force, MINUSCA, to replace the West African peacekeepers in MISCA. Absent a more meaningful political dialogue on a federal structure involving a measure of power sharing, the United Nations and the African Union are likely to find it difficult to mobilize a durable political solution.

In sum, decentralization of power is not per se a solution to the multiple challenges in the Middle East and Africa. But it can contribute to giving citizens a greater sense of participation and engagement in decisions affecting their lives and destiny.

John Hirsch is Senior Adviser to the Africa Program at the International Peace Institute.