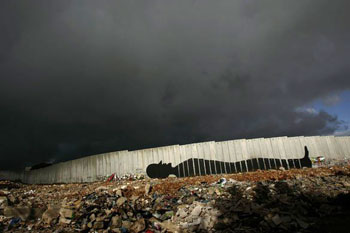 Graffiti on the wall between Gaza and Israel, photographed in 2010. (Shamsuddin/Facebook)

After 29 days of fighting, a 72-hour truce between Israel and Hamas seems to be working. Israel has pulled out all its ground troops from Gaza, and calm is finally settling over this densely populated strip of land. Most people in Gaza don’t trust the truce enough to return to their homes. Still, the hope is that the truce will be extended beyond the initial 72 hours and develop into a negotiated ceasefire agreement.

Past ceasefires have restored relative calm in Gaza and southern Israel in a formula known as “quiet for quiet.” But this year’s war showed that a ceasefire is no longer enough to give Israel security and bring hopes for a better life back to the people in Gaza. There is a need to address some of the root causes of these eruptions of conflict and move beyond the cycle of violence.

The previous conflict in Gaza ended with a ceasefire agreement in November 2012, which stipulated that Israel and all political factions in Gaza would stop hostilities, and—essential to the people in Gaza—that the blockade would end. However, the blockade was never lifted, despite a rather successful implementation of the “quiet for quiet” agreement.

To get around the Israeli-imposed blockade, a tunnel business flourished under Gaza’s border with Egypt, thanks to a relaxed border between the Gaza Strip and Egypt after the Muslim Brotherhood came to power in Egypt in 2012. Thus, a limited supply of food, gas, and construction materials still flowed into Gaza. And since Hamas taxed the imports, the blockade inadvertently generated enough revenue to sustain its rule.

When the Muslim Brotherhood was ousted by Abdel Fattah al-Sisi in July 2013, this lifeline was crushed. Other regional changes further isolated Hamas, particularly the break with Iran over the Syria crisis. Animosity toward Hamas from the likes of Jordan, Saudi Arabia, and the United Arab Emirates (UAE) added to its isolation. Without a strong ally to turn to, the economy of Gaza deteriorated quickly. In April 2014, the Hamas leadership was ready to accept nearly all the conditions set by Fatah for reconciliation between Gaza and the West Bank. The reconciliation process was complicated, however, by a series of unexpected events leading up to the war.

Today, after a month-long conflict, the most important question is how to move beyond the cycles of war and “quiet for quiet.” Hamas has presented relatively modest demands: first, that Israel honor the last agreements with Hamas based on the November 2012 ceasefire, including lifting the blockade and the Gilad Shalit prisoner exchange. Israel is particularly concerned about how its enemy is using the periods of calm to build new attack capabilities, and discussions now abound in Israel about how to improve strategies and tactics for dealing with an enemy like Hamas.

Simultaneously, Hamas has encouraged spontaneous solidarity protests throughout the West Bank to grow into a third intifada. Some of the protests have escalated into nightly clashes with Israeli soldiers, and a demonstration of 10,000 people at the Qalandia checkpoint north of Jerusalem gathered the largest crowd since the second intifada. The last day before the ceasefire also saw some fatal attacks by lone Palestinians against Israelis in Jerusalem.

There is, however, little evidence of a major coordinated uprising against the Israeli occupation. The central Fatah leadership is against a new intifada, which would likely weaken its position. The fact that Palestinians in the West Bank have experienced economic development and improved livelihoods could also make a third intifada unlikely—they might find they have too much to lose in another uprising.

The current truce is intended as temporary, to allow the parties to meet in Egypt to negotiate a more solid agreement. Resuming the American-led peace process that stalled last spring is not very likely as a first step. Instead, the nascent reconciliation process between Fatah and Hamas might serve as a starting point to re-think the situation for Gaza. Indeed the fragile unification process was not destroyed during the war; instead, both parties have emphasized their support for continued unification between the Gaza Strip and the West Bank. The PLO is now supporting Hamas’ demands for a ceasefire, and the word “resistance” has returned to its vocabulary, perhaps to cater to increased grassroots support for the resistance movements during the war. President Mahmoud Abbas’ trip to Qatar during the war to negotiate a truce is also a significant symbol of the importance of the reconciliation, as is the Palestinian Authority’s tacit allowance of a transfer of funds in July to pay all Gaza employees, including Hamas staff (the funds reportedly came from the UAE).

Nonetheless, the reconciliation process still faces many obstacles. For one, the war-bolstered Hamas leaders need to step down in Gaza and accept the authority of the unity government. One suggestion is to extend security cooperation between the Palestinian Authority and Israel by deploying 1,000 members of the US-trained Presidential Guard to monitor border crossings in Gaza. During the war, Hamas did not accept this initiative, but if it can lead to an ease of the blockade, it might be willing to consider such terms.

Opening the borders to both Egypt and Israel will be essential for post-war reconstruction. After the war in 2008-09, construction materials were mainly provided through the tunnels from Egypt. Now, most of these tunnels are destroyed, and current Egyptian leaders have little interest in reopening them. A lift of the siege will therefore be necessary to start rebuilding the shattered infrastructure and damaged buildings.

But reconstruction is not enough for Gaza at this stage. It is necessary to have a more comprehensive development plan, as seen in the West Bank. There is a need to give back to the people in Gaza their hopes for the future. With no hope, the support for a political solution to the conflict is fading. And a political solution for peace and security needs support from ordinary people. Otherwise, you put the destiny of an entire people in the hands of spoilers that will benefit from continued conflict.

If people can see that improved lives are a result of keeping the peace, they might return to supporting a two-state solution for Israel and Palestine. In a Fafo Foundation project among Palestinians in the West Bank on perceptions of how to solve the Palestinian-Israeli conflict, many expressed little support for a two-state solution. The facts around them suggested a one-state solution as a more feasible outcome. Hence, their focus had turned to a question of equal rights.

Some, however, suggested that if the Palestinian state were established and they were dignified with Palestinian citizenship, this question would have been answered differently. Having gained some rights, a two-state solution would quickly become more tempting. Knowing Israel will never accept a one-state solution with equal rights for all its citizens underscores how urgent it is to move forward and find a political solution to the conflict. Time is no longer benefitting Israel.

Can the Gaza ceasefire get the parties back on this track? Some regional observers argue along such lines, although the recent loss of trust between the US and Israel’s Premier Benjamin Netanyahu complicates such a development.

Now is the time to go beyond humanitarian assistance to a war-torn Gaza. With the unification between Fatah and Hamas, development with trade and economic growth can go beyond the West Bank and reach Gaza. The first step is to lift the blockade.