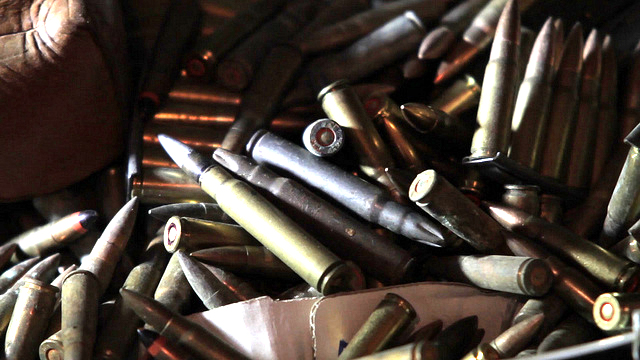 While ferocious armed conflicts in Gaza, Ukraine, Libya, and Syria dominate news headlines, the foremost United Nations (UN) process to combat the illicit trade in small arms appears to have lost its way. In 2001, UN member states hammered out a compromise program of action to be the foremost global map to tackle illicit small arms, which are widely used to injure and kill people both in times of war and peace.

Thirteen years later, as reflected in the diplomatic deliberations during the Fifth Biennial Meeting of States (BMS5) on the implementation of this program of action that took place in New York in June this year, it was evident that the UN process has become preoccupied with peripheral issues. These included small arms marking and tracing, and the management of government weapons stockpiles. If the small arms process was compared to that of food insecurity and malnutrition, it would be as if an initiative that once held the aspiration of eradicating world hunger had now become obsessed with food labeling and warehouse management.

This is not to say that tight controls over government arsenals and weapons tracing are unimportant. The recent civil war in Libya is a clear example of state weapon stocks being plundered and then trafficked throughout Africa’s Sahel region, which subsequently fomented violence in other countries, such as Mali. Nonetheless, when governments are forcefully deposed, as was the case with the Gaddafi regime, weapons stockpile controls become largely inconsequential. Some well-resourced national police agencies have had some successes closing down arms smuggling sources that were identified through weapons tracing efforts. Nevertheless, the track record of multi-country tracing efforts have been somewhat checkered.

With the benefit of hindsight, the trajectory of the UN small arms process toward triviality was predetermined. The grueling negotiations of 2001 culminated in the comprehensive exclusion of references to legal gun possession by civilians. This weakened the potential potency of the UN process, as the illicit small arms trade cannot be effectively combated without due consideration of the legal aspects, and particularly the manner in which legally-held arms become illegal.

Civil society organizations concerned about gun violence were seminal to the creation of the program of action and have actively supported the process since 2001. But key organizations began to disengage from 2006 as the focal areas narrowed and the political gumption evaporated. At the BMS5, most of the advocates—particularly those from countries suffering from epidemic gun violence levels—were conspicuously absent.

It is clearly time for a re-think of the international small arms control processes, particularly whether UN processes are capable of providing solutions to global gun violence epidemic demands. Perhaps we should reassess the assumption that outcomes of diplomatic discussions will necessarily trickle down to the local level. Should civil society leave the comfort zone it has become somewhat accustomed to, often following UN diplomatic processes (or proposing new ones), and construct different paths altogether?

Outside of the UN process, some governments affected by high levels of gun violence, such as Brazil and South Africa, have successfully pursued approaches and interventions to reduce and prevent such violence. These positive developments have revolved around the implementation of new gun control legislation and practices, as well as policing action.

In South Africa, the homicide rate due to small arms fell by close to 30 percent between 2000 and 2007 following the execution of a comprehensive firearm strategy by the police, and the introduction of more rigorous firearm controls. Similarly, in Brazil, gun homicides declined after the introduction of stricter gun controls through the Disarmament Statute of 2003. Regions that have increased citizen safety—particularly the state of São Paulo, which reduced homicides by a jaw-dropping 70 percent in the last decade—have seen the dividends of stricter control of the “tools of violence.”

All in all, national gun control measures are never a silver bullet to reduce homicide levels, and must be accompanied by other complementary efforts. Nonetheless, in the most affected regions of the world, such as Latin America and Africa, success stories (and potential ones) can look at these measures as essential. Consequently, it may be prudent for any new international process or framework to take a bottom-up approach, building on the successes of national gun violence reduction successes and continuously adding building blocks, rather than hoping for the elusive global answer from the halls of the UN.

Guy Lamb is the Director of the Safety and Violence Initiative at the University of Cape Town, South Africa. Daniel Mack is a Senior Adviser for Instituto Sou da Paz in São Paulo, Brazil.