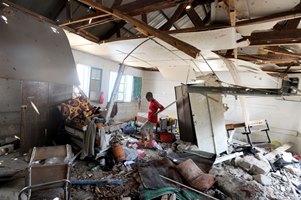 A Palestinian student inspects the damage at a UN school at the Jabalia refugee camp after the area was hit by Israeli shelling on July 30, 2014.

A little over a week ago, the UN Secretary-General’s Special Advisers on Genocide Prevention and the Responsibility to Protect (Adama Dieng and Jennifer Welsh, respectively) issued a joint statement on the situation in Gaza. The statement advanced a bold account of the situation in Gaza and outlined steps to strengthen the protection of Gaza’s population. Sadly, the statement generated little interest beyond a small community of diplomats and analysts. It deserves to be revisited.

The Special Advisers noted that Israel (as the occupying power), the Palestinian Authority, and Hamas all shared in the responsibility to protect the population in Gaza, and that the international community had a responsibility to assist in protecting the civilian population. The Special Advisers expressed “shock” at the civilian casualties, observing that the high toll could “demonstrate disproportionate and indiscriminate use of force” by the Israel Defense Forces (IDF). They concluded that both sides “are in violation of international humanitarian law” and pointed to the “disturbing” use of hate speech on social media directed especially against the Palestinian population.

The Special Advisers urged all parties to comply with their legal obligations to international humanitarian law, called on the international community to “encourage and support” negotiations toward a ceasefire, recommended the delivery of humanitarian aid and the establishment of “humanitarian corridors,” insisted that those responsible for war crimes and crimes against humanity on both sides be held accountable for their actions, called for the lifting of the blockade of Gaza, and urged the parties to enter serious negotiations to end the cycle of violence.

Last Friday, hopes emerged that at least some of these objectives could be achieved when UN Secretary-General Ban Ki-moon and US Secretary of State John Kerry brokered a 72-hour “humanitarian ceasefire” and won a commitment from the parties to begin negotiations on a durable ceasefire.  But the ceasefire collapsed almost as soon as it came into force, due, it seems, to a callous attempt by Hamas to exploit the pause for its own tactical advantage. All too predictably, Israel responded with overwhelming force, much of which rained down on civilians. Included in the target list were buildings apparently struck because of their cultural or religious value—not because they were military targets. Once again, the UN and those civilians sheltering under what limited protection its flag still offers, were targeted. On Sunday, at least ten civilians at a UN-run school were killed in what appears (at best) to have been a disproportionate strike on three suspected members of an armed group riding near the school.  This was the third time the IDF had directed fire against a UN school with deadly consequences for civilians. Ban Ki-moon described the attack as “reprehensible” and “criminal.”

The conflict in Gaza clearly needs to be understood within its broader historical context. There will be no end to the violence until durable solutions to the underlying political problems are found. The Responsibility to Protect (R2P) is agnostic on precisely what that solution should look like, though the Secretary-General’s 2013 report on “State Responsibility and Prevention” gives powerful clues as to what ought to be included. R2P is most certainly not agnostic when it comes to the urgent need to protect populations from atrocity crimes and the looming need to break the cycles of escalation and impunity that keep Gaza’s civilians in an intolerable condition of acute risk.

In terms of the immediate challenge, like others before them, the Special Advisers called on the “international community” to do what it could to persuade the parties to agree an immediate ceasefire. There are few good options in this regard, and the diplomatic context is becoming only more difficult.  Would-be mediators have to contend with the extraordinary and blatant display of bad faith by both parties in the wake of the “humanitarian ceasefire.” If reports are correct, it seems that Hamas planned to violate the ceasefire for tactical gains and that the IDF was simply waiting for an excuse to drive its own coach-and-horses (in this case, tanks and mortars) through the ceasefire agreement. Clearly, neither party believes that their ceasefire agreements are worth the paper they are written on, and each expects the other to renege on their agreements and acts accordingly.

The problem of bad faith is compounded by the absence of a trusted third party. The Egyptian government is avowedly opposed to Hamas. Indeed, it is likely that it was Egyptian moves against Hamas, which are reckoned to have seriously damaged its capacity to import goods and raise funds, that prompted the group to step up attacks on Israel in the hope of winning much-needed concessions on the blockade. Meanwhile, negotiating on one hand, while supplying ammunition to Israel on the other, makes the US more an ally to one of the parties than an impartial third party. On the other hand, regional activists such as Turkey and Qatar have associations with Hamas that make them unsuitable as mediators. The Quartet’s Tony Blair is, at best, a lame duck envoy and always was—his appointment being more a sign of their lack of seriousness than anything else.

While the UN itself has a long and tortuous history in Palestine, the Secretary-General has adopted a strong and consistent line in defense of civilian protection and human rights and is uniquely placed as arguably the most appropriate mediator. But, as political figures with all the responsibility and no power, UN Secretaries-General have a notoriously difficult time extracting concessions from parties unless they are backed strongly by the Security Council. Simply put, the parties are likely to reach a durable ceasefire only if the anticipated costs of not doing so are increased by promises of international action. That would be very hard to achieve in this case. On the one hand, besides raising all sorts of normative questions, it would be difficult (at best) to persuade the US and its allies to support the adoption of one-sided measures designed to push Israel to the negotiating table. On the other hand, as it is already proscribed as a terrorist organization in the West and confronted directly by its two neighbors (Israel and Egypt), it is difficult to see what additional measures could be usefully adopted to make Hamas more cooperative.

Partly as a result, the most likely endgame for this particular crisis is a unilateral cessation and withdrawal by Israel without any agreement with the Palestinian Authority or Hamas. In the short term, Hamas will emerge weakened, but if the past is any guide to the future, it will rebuild itself with a new generation scarred and traumatized by the seemingly indiscriminate destruction of their civilian neighbors and therefore more radical and determined than the last. Far from breaking the cycle of escalation, as called for by the UN’s Special Advisers, events over the weekend have reinforced them and likely planted the seeds of Gaza’s next war in which more civilians will suffer and die.

The Special Advisers identified one potential way of breaking the cycles of escalation and impunity: holding those responsible for violations of international humanitarian law accountable for their actions.

Few would disagree that accountability is critically important. One of the most striking aspects of the current conflict is the appallingly low regard that both parties have for civilian life. Through its actions, the IDF has exposed the hollowness of its rhetoric about compliance with the law. Time and again, it has fired directly on civilians, its actions clearly lacking discrimination and proportion. But Hamas has been no better. It has stored weapons in vacant UN facilities, deliberately targeted civilians and willfully violated a “humanitarian ceasefire,” squarely placing civilians in harm’s way.

How is accountability to be achieved? The mandating of an investigation by the UN’s Human Rights Council is a step in the right direction. However, while illuminating the evidence of atrocity crimes, the Human Rights Council’s past efforts did not lead to accountability. Nor, in recent years, has either the Israeli government or the Palestinian Authority investigated allegations of war crimes and crimes against humanity in an independent and impartial manner.

As such, the only viable way of ensuring accountability is for the situation in Gaza to be referred to the International Criminal Court (ICC). If true, the Palestinian Authority’s willingness to consider signing the Rome Statute should be applauded and the Authority encouraged down that path. But the Authority cannot yet become a state party and its actions would be largely symbolic. The practical engagement of the ICC requires a referral by the UN Security Council. Given that the Council has referred other matters to the ICC, including complex and difficult ones, the only legitimate reason for not doing so in this case would be the viability of alternative accountability mechanisms. Given that no such alternatives exist, it is imperative that the Security Council consider referring the situation in Gaza to the ICC. I can see no good reason not to do so. In the absence of accountability, impunity will give rise only to further escalation—and civilian suffering—in the future.

Alex J. Bellamy is Director of the Asia Pacific Centre for the Responsibility to Protect and a Non-Resident Senior Adviser at the International Peace Institute.