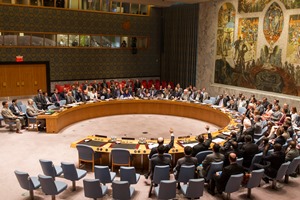 The Security Council unanimously adopts a resolution that allows for aid to be delivered using the most direct routes in Syria, without needing permission from the Syrian government, July 14, 2014. (UN Photo/Mark Garten)

In a rare moment of unanimity on Syria, earlier this week the United Nations Security Council adopted Resolution 2165, authorizing UN agencies and their humanitarian partners to use routes across conflict lines and four specific border crossings (Bab al-Salam, Bab al-Hawa, Al Yarubiyah and Al-Ramtha) to “ensure that humanitarian assistance, including medical and surgical supplies, reaches people in need throughout Syria through the most direct routes.”

By opening humanitarian access to the approximately 10.8 million Syrians in need of assistance, the resolution has the potential to make a tangible difference to the lives of those most affected by Syria’s conflict. This is no small feat: humanitarian assistance can sometimes be the difference between life and death. Politically, while the Council has reached points of consensus on Syria before, this is the first time it has authorized operational measures without the consent of the Syrian government.

To what extent, though, does this represent a departure from past practice, and what impact can we expect Resolution 2165 to have on the ground?

This is not the first time that the Security Council has issued demands or authorized actions with respect to humanitarian access. Rarely, if ever, however, has the Council expressly authorized the crossing of international borders by UN agencies and their humanitarian partners, bypassing host state consent and circumventing national prerogatives on border control and immigration.

Typically, in the past, the Security Council has demanded that the parties to a conflict comply with obligations to grant unimpeded humanitarian access prescribed by International Humanitarian Law. This was the approach taken with respect to Libya in Resolution 1973 (2011), for example. While the Council’s demands are legally binding, they do not permit other actors to take actions otherwise prohibited by national or international law in order to give them effect. Thus, the Council’s demand in Resolution 1769 (2007) that all parties to the conflict in Darfur cooperate with humanitarian organizations did nothing to prevent the Sudanese government expelling agencies in 2009. In practice, humanitarian agencies sometimes take advantage of a government’s loss of control over a particular territory to operate on that territory without its consent, but these actions are not protected by international law, and those agencies may be expelled or subjected to legal action should the government retake control of the territory concerned.

The Security Council has provided stronger support for humanitarian access in the context of peacekeeping operations with protection of civilians mandates. It is increasingly common for the Council to mandate peacekeeping operations the use of “all necessary means” to, among other things, “ensure the security and freedom of movement of…humanitarian workers” (Resolution 1706 (2006) on UNMIS in Sudan) or “contribute to the creation of a secure environment for the safe, civilian-led delivery of humanitarian assistance” (Resolution 2100 (2013) on MINUSMA in Mali). While this signals a clear trend towards more robust support for humanitarian access within peacekeeping operations, these resolutions relate to operations predicated on host state consent and refer to humanitarian freedom of movement within the country of operations; they do nothing to limit the host state’s right to control movement in and out of the country, as experience in Sudan and elsewhere attests only too well.

There is no doubt that the overriding political imperative behind Resolution 2165 was the search for the small piece of common ground between the Council’s permanent members on Syria. But as so often happens with the Security Council, the need for creative diplomacy in the face of sharp political divisions may have produced an innovative response to the problem of humanitarian access.

It is impossible at this stage to know whether Resolution 2165 sets a new precedent in relation to humanitarian access. Naturally, some have been quick to point to the exceptional nature of the situation in Syria and to suggest that no precedent was intended. Interestingly, though, while the Council has sometimes signaled its intent to avoid creating a precedent by stressing a situation’s exceptional characteristics, Resolution 2165 contains no such reference. Read in the context of the dozens of past resolutions, both thematic and substantive, in which the Council has demanded that parties grant unimpeded humanitarian access, the implication would seem to be that the Council now recognizes a norm of humanitarian access in situations of armed conflict such that it can, indeed should, authorize access in situations where it is not freely given. This view is further reinforced by the Council’s practice of authorizing peacekeeping operations to protect humanitarians and take action to ensure their freedom of movement.

Rather than an entirely new precedent, therefore, Resolution 2165 might be better understood as an extension of the Council’s evolving practice in support of humanitarian access. This is a practice that can be traced back at least as far as Resolution 688 (1991) on northern Iraq, but which has become an almost standard part of its response to humanitarian crises caused by armed conflict. The extension, in this case, is the granting of access without state consent.

Things get more complicated, though, when it comes to figuring out what this means for the broader question of whether there exists a customary legal right of humanitarian access without host state consent. On the one hand, optimists might argue that Resolution 2165 adds further weight to the view that such a right is emerging if not yet fully recognized. On the other hand, however, the more conservative-minded (this author included) would suggest that the facts that the Council made no mention of such a right and that the right of access in this case required specific authorization mean that it is, at best, premature to speak of a more generalized norm of humanitarian access absent host state consent or Security Council authorization. This sentiment is reinforced by the fact that the authorization contained in Resolution 2165 expires after 180 days. By this reading, state consent remains the norm, with humanitarian access in other situations requiring Security Council authorization.

In the longer term, much hinges on how the resolution is implemented. If it proves successful, then Resolution 2165 may well go down as a landmark in furthering norms of humanitarian access. If, however, the positive effects are marginal or non-existent, or if the delivery of aid creates more problems than it solves, then this might well become one innovation from which the Council will look to distance itself. Three factors will be especially important here.

First, the cooperation of the parties. It is one thing for the Security Council to authorize the delivery of aid and demand that the parties cooperate with UN agencies and their humanitarian partners; it is quite another to secure and maintain that cooperation in practice. Experience has taught that there are many ways by which armed groups can delay and misdirect humanitarian assistance. It cannot be stressed enough that effective implementation rests squarely on the goodwill and cooperation of the parties to the conflict. But these are qualities that have been in short supply. Much will hinge over the coming weeks and months on the Secretary-General’s assessment of the state of cooperation and the Council’s willingness to ensure that its demands are complied with. Its track record here is not good with respect to Syria. But Resolution 2165 commits the Council to adopting further measures in the event of non-compliance by any of the parties.

Russia’s Permanent Representative to the UN Vitaly Churkin was quick to point out, quite correctly, that the resolution contained no automaticity, leaving it for the Council to determine the appropriate response at a later stage. Australia’s Permanent Representative Gary Quinlan was equally correct to point to the significance of the fact that the Council promised further measures in the event of non-compliance as distinct from promising to consider further measures as it has done in other cases. Much will depend on how the Council responds to the all-too-likely non-compliance of one or more of the parties.

Second, the adequate provision of resources by UN member states. For all the noise generated about the humanitarian crisis in Syria, UN member states have not been overly generous in their support for humanitarian efforts there. Funding for the UN-led Syrian Humanitarian Assistance Response Plan (SHARP) has consistently fallen well short of what was requested. In 2012, SHARP funding fell short some $130 million; in 2013, the shortfall ballooned to around $600 million; and in 2014, the shortfall stands at over $1.4 billion. More than halfway through the year, only a little over a quarter of the requested funds have been delivered. It is imperative that member states step up their support for the UN’s humanitarian efforts in Syria if the goal of providing aid to the 10.8 million people who need it is to come anywhere close to being achieved.

Third, the effective management of downside risks. Humanitarian action is not without downside risks, and it will be important that these are managed effectively. Politically, there is a danger that Resolution 2165 will only reinforce the tendency to treat a political and protection crisis as a mainly humanitarian problem. It is important that the Council not be lulled into thinking that it has discharged its responsibility by adopting this resolution. On the ground, armed groups will try to control and manipulate assistance and redirect it towards supporting their goals; these same groups will also try to make direct use of humanitarian assistance to help them prosecute their war, potentially extending the armed conflict by helping them sustain themselves and relieving them of responsibilities to care for the civilian population in the territories they hold; the screening of humanitarian deliveries as provided for in the resolution will likely become politicized; and the security of humanitarian workers and those they care for may itself become a strategic pawn in the hands of the armed groups. All these, and other, potential downside risks will have to be carefully monitored and managed. Above all, though, the UN will need to guard against the temptation of trading human rights and protection for humanitarian access–a trap it fell into in Sri Lanka, with tragic consequences.

In summary, Resolution 2165 marks a potentially significant milestone not just in the Security Council’s response to the crisis in Syria, but also in emerging norms and practices with respect to humanitarian access. Quite how significant, and how positive, this proves to be will depend almost entirely upon what happens next.

Alex J. Bellamy is Director (International) of the Asia Pacific Centre for the Responsibility to Protect and Non-Resident Senior Adviser at the International Peace Institute.