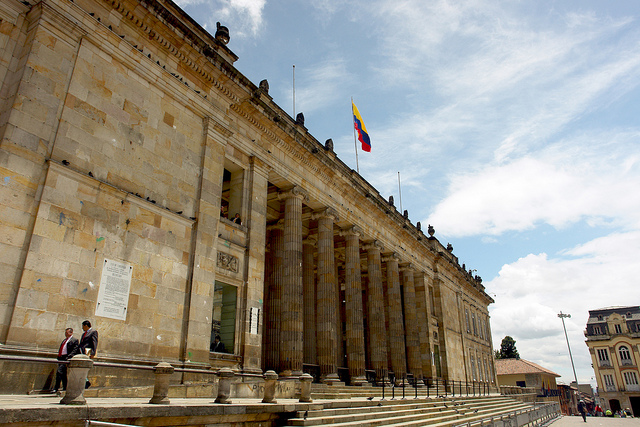 “We want peace? Then we need to make peace with both the FARC and the very extreme right,” said Colombia’s Senator-elect Claudia López. “Because they are the two extremes in the country, and they have both been able to use violence, force, destabilization.”

In this interview with the Global Observatory, Ms. López discussed the influence the new Congress could have on Colombia’s peace process with the guerilla group FARC, now in its second year. She also discussed the effect of the recent presidential election on the process, which revealed Colombians are divided over the negotiations.

She also spoke about justice for FARC victims; dialogue with the country’s second largest guerilla group, ELN; and what role, if any, the international community will have in securing peace in Colombia.

Ms. López was interviewed by Adam Lupel, Senior Fellow and Director of Publications at the International Peace Institute.

President Santos was narrowly re-elected on June 15 after a hard-fought campaign that many saw as a referendum on the continuing peace talks in Havana. While the election was a victory for Santos, the result revealed that the country remains divided over the negotiations with the FARC [Revolutionary Armed Forces of Colombia]. What do you see as the greatest challenges for the peace process in the coming months?

The election, as you said, was a referendum about the peace process, and even though Santos won by a small margin, it was a positive result for the country. But deciding how to deal with the FARC will always be an issue that divides Colombian society. I think that’s just part of its history.

But the important thing is that we are engaged in a peace process that in general has tried to learn from the past processes with the FARC that have been painful for the country. In particular, “El Caguan” [the failed peace process between the government of President Andres Pastrana and the FARC of 1999-2002, which included a demilitarized zone] is the one people remember the most, and the one people have bad memories about. We have learned from that experience.

In general, I think the methodology the peace process is taking now is correct. It is taking place outside of the country; there is no demilitarized zone that has been given to the FARC (our armed forces are still fighting every day, providing security for all Colombians the best they can); and there is a closed agenda with five specific topics. It’s not that we are dealing with every issue in the country, but we are focusing on these very specific five issues. And for three of them, as far as we know, there has been some level of agreement.

So we are, in general, with all the complexities of this process, on the right path. And I hope we can finish these conversations within a year. That’s what the country expects. And for a small majority at least, we want to support this process, but not any kind of process, and not for a very long period. I hope we can finish the process by October 2015 at the latest, to hold the referendum at the time of the next local elections to ratify or not what the negotiators have agreed on.

And that’s the last point that I think makes me and a lot of Colombians sort of cautious but at the same time optimistic: We are going to have the right to vote—every Colombian is going to have the right to vote to decide whether or not to accept what has been negotiated. So I think that’s a very important issue. Of course, it’s going to be hard. As always, to put these decisions to the voters is difficult and complex, but I think that’s the right way to go.

Beyond a public referendum to approve any agreement that has been made, the peace accord will have to go through Congress to be implemented. It’s known that ex-President and fellow Senator-elect Álvaro Uribe considers the FARC to be a terrorist group that should be defeated by force rather than legitimated through dialogue. His opposition party Centro Democrático will be strongly represented in the new Congress. What effect will his presence in Congress have on the implementation of the peace process, if it is approved?

Well, I think President Uribe and Centro Democrático are now a very respectful opposition party. They’re going to play that role—that’s very clear. And I don’t see that as a problem. I myself have been in the opposition for many years. That’s what democracy is supposed to have: opposition and the right to lose elections. That’s what happened to them—they just lost the elections. They’re going to be a strong and very argumentative opposition. But, again, I don’t see that necessarily as trouble.

According to the last results in the presidential elections, they represent 45 percent of the country. So, their voice is important and has to be taken into account. I hope we can deal with some of the worries or uncertainties about the process. There are certain things that the Centro Democrático electorate just don’t know, or don’t know very well. I hope that as soon as we can know more details about exactly what has been negotiated, what the agreements are about, what they imply, we can provide a lot of information and elements to that electorate that makes them less cautious and more sensitive to this issue.

So in general, I’m not worried about Álvaro Uribe in the Congress. I think that’s part of the peace process. We want peace? Then we need to make peace with both the FARC and the very extreme right. Because they are the two extremes in the country, they have both been able to use violence, force, and destabilization. So we want peace, but we cannot reach peace by just dealing with one part. So one part is the FARC, and they are still in arms and using violence, and we need to deal with them through this peace process. And the other part is a legitimate political base that we need to deal with through dialogue, and eventually negotiate with them, so that they can actually compromise, too, to accept the agreements the best way they can. I think that’s our job and our challenge in Congress.

On June 6, the negotiating parties in Havana announced a critical joint declaration of principles on the rights of victims. Addressing the concerns of victims and establishing a process of transitional justice are key components of any enduring peace. What in your mind are the prospects for success on this difficult issue?

Another thing that makes me optimistic about that declaration was that both the state and the FARC declared that this peace process was not going to be a “mutual impunity” agreement. I think it’s very important that this is not going to end in a way in which the state provides the FARC [with] the level of impunity that it wants for itself, that they both recognize that they are responsible before their victims. There are victims both of the FARC and also of the state in this armed conflict, and both parts have to responsibly assume the rights of the victims.

In general, I think this is a good start, but it’s just a start. It’s just a declaration of principles to agree about the issue specifically. So now I hope that the different victims’ organizations, including of course victims’ organizations of the FARC, can have a voice. I don’t think they’re going to be part of the negotiations because I don’t think that’s the way to go. I mean, the negotiation is between the FARC and the state. But it doesn’t mean that both parties cannot listen to what the victims have to say about how they think their rights are being taken into account in the process. We’ll see how it develops.

All this is very complex, but I think so far so good, and my only worry is that the Colombian people are somehow hopeful about the process, but also impassioned about it. This means that the FARC and the government don’t have another four years to do this. I want to be very clear on this: I think they don’t have more than a year for this. If by October 2015 we don’t have a final agreement, and we’re not going to the elections for the referendum, I think we are going to be in really deep trouble with this issue.

On June 10, the government announced that it had begun a separate dialogue with the ELN [National Liberation Army], the second-largest guerrilla group in the country. What bearing will this have on the negotiations with the FARC, and does this raise the prospect of a truly comprehensive peace deal to come?

What role do you see for the international community in securing peace in Colombia? Some have suggested that UN peacekeepers could be deployed. Do you see this as a possibility?

I don’t think so, and I hope that’s not the path that we are going to take. My message to the international community is: Peace in Colombia is to build a state, civil society, and legal markets for people to work. That’s what peacemaking means in a country such as Colombia. We have the problems we have because we don’t have state presence and state ability to rule in at least half the territory of Colombia. And at least a third of the population of Colombia lives every day under the rule of no law or under the rule of criminal groups, whether the FARC, ELN or the BACRIMs [paramilitary criminal gangs].

Actually, the challenge for us in peacebuilding is to do statebuilding, and to do it properly, and to do it with the people, and with different localities at the regional level. Instead of United Nations peacekeepers, what we need to strengthen is the Colombian national police and deploy it in rural areas so that they can offer rule of law with judges and attorneys-general, and all things that we don’t have at this moment in half the country. It’s a statebuilding perspective rather than any other perspective that should be supported in Colombia.