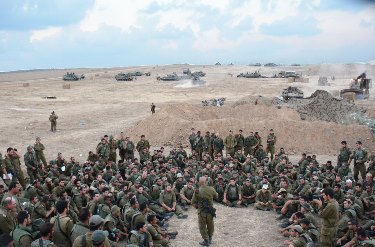 Soldiers in the Israel Defense Forces are briefed during a search for tunnels in the Gaza Strip, July 19, 2014. (IDF)

After truce negotiations brokered by Egypt last week and a brief humanitarian ceasefire promoted by UN Special Coordinator Robert Serry failed to bring about an agreement between the parties to stop the hostilities, the Israeli government decided to launch a ground invasion in the eastern perimeter of the Gaza Strip. Its main goal has been the destruction of dozens of tunnels that the Palestinian militias had dug underneath this area over the last few years. Some of the tunnels have offensive purposes—their exits are located on the Israeli side–though most of them are defensive, allowing the militias to move underground and avoid detection by Israel Defense Forces (IDF) drones and observation points along the security fence.

The ground offensive started right after the IDF foiled a spectacular attempt by thirteen commandos of the Izz ad-Din al-Qassam Brigades to infiltrate Israeli territory in a very similar way the Popular Resistance Committees did in June 2006 when they kidnapped the Israeli soldier Gilad Shalit. The fact that this attempt took place a few hours before the beginning of the five-hour humanitarian ceasefire that had been agreed upon through Serry’s mediation, and that it was captured on camera and broadcast widely on TV and social media, made the ground invasion unavoidable. Even Israel’s military intelligence experts were amazed by the degree of sophistication of the tunnel networks.

The ground operation’s secondary goal has been the destruction of all the sites used to shoot mortars and other short-range projectiles at the Israeli communities and kibbutzim near the Gaza Strip. Even though these goals are legitimate, the cost in terms of human life has been enormous. While the number of Palestinians killed each day during the ten-day first phase of operation “Protective Edge” was around 30, the number jumped to more than 100 per day in the first three days of the ground operation. After more than two weeks of fighting, the number of Palestinian fatalities is now over 700, with almost 5,000 injured. According to UN statistics, more than 75 percent are civilians, which is a much higher percentage than IDF’s previous operations “Cast Lead” (January 2009) and “Pillar of Defense” (November 2012). Several Western leaders have said these numbers are “unacceptable.”

So far, the IDF has concentrated its actions within a three-kilometer-wide perimeter inside the eastern part of the Strip in which it has occupied strategic enclaves such as the Ash Shuja’ijeh neighborhood in the northern part of Gaza City and Kuzza’a village near Khan Junis. The number of victims and the amount of material destruction has been enormous (for instance, the al-Wafa hospital for rehabilitation has been completely flattened after being bombed several times by aircraft and artillery), so much so that UN Human Rights Commissioner Navy Pillay has expressed her concerns that the IDF might have committed war crimes during these operations in Ash Shuja’ijeh and Kuzza’a. In these two places, the injured were allegedly left bleeding for many hours before the IDF allowed the International Committee of the Red Cross (ICRC) to bring in ambulances to evacuate them.

For the time being, it seems as if the IDF’s tanks, armed personnel carriers, and ground troops will hold their current positions, combing the area, looking for additional tunnels and short-range rocket launchers, and waiting for new orders from the political echelon. In the meantime, the Izz ad-Din al-Qassam Brigades will keep shooting rockets on a daily basis, although not with the same frequency as in the first phase. However, these rockets have managed to stop several foreign airlines from landing at Ben Gurion airport in Tel Aviv for a few days, disrupting Israel’s commercial aviation and causing significant damage to its tourism industry.

The Illusion of a Ceasefire

Though the fighting continues, both parties have signaled that they would consider a temporary ceasefire and begin negotiations toward a long-term truce agreement. This is especially important for the 1.8 million citizens of the Gaza Strip and the surrounding Israeli communities who have been through three wars in the last six years and need to get out of this cycle of violence, destruction, and misery so that they can move into a cycle of peace, development, and prosperity.

The best offer put on the table so far by UN Secretary-General Ban Ki-moon and US Secretary of State John Kerry after their respective visits to the region is a five-day humanitarian ceasefire during which the sides would meet in Cairo. Not only would representatives of Israel and Hamas be there, but also the Palestinian Authority (PA) and Egypt, who would be part of the agreement. Israeli  government sources, speaking off the record, have hinted that this proposal might be accepted today. The ceasefire could also end up being for more than five days, because (among other reasons) the Israeli public cannot be left anticipating a renewal after only a few days; the extremely difficult situation in Gaza may also be a reason its duration is extended.

The PA is proposing that if Hamas agrees to the Egyptian initiative, about 1,000 members of its Presidential Guard (Aman Al-Rais, trained and equipped in the West Bank under the supervision of the US Security Coordinator, along with the National Security Forces, Aman Al-Watani) could be deployed at the Philadelphi Corridor and at the Rafah border crossing. This proposal was found acceptable to Egypt and Israel, but has so far been rejected by Hamas. Egypt is a key player in this issue and should be an integral part of any new agreement, and not secondary, as happened in the November 15, 2005 Agreement on Movement and Access brokered by former US Secretary of State Condoleezza Rice.

In tandem with these talks about a temporary lull, various other actors (the Arab League, Qatar, Turkey, Saudi Arabia, and the United Arab Emirates) are holding talks on an extended ceasefire between Hamas and Israel. Hamas has a long list of legitimate demands that Israel so far refuses to agree to–open the Rafah crossing 24/7, with regular open hours for the rest of border crossings; lift the economic blockade on the Strip; widen the fishing area; and release the detainees who were re-arrested after being freed in the Shalit exchange deal in November 2011. Israel, on the other hand, is demanding the demilitarization of the Gaza Strip of rockets and tunnels under international supervision.

The most important condition for any new truce to work is to go beyond the previous paradigm of “quiet for quiet” that characterized the understandings reached after previous rounds of fighting. Israel can only agree to it if it addresses the issue of Hamas’ strengthening and arming in the future. Hamas can only agree to it if the above-mentioned conditions are met, because, at the end of the day, whether we like it or not, the Islamist organization was elected in the January 2006 legislative elections and is responsible for the well-being of almost two million people who are currently living miserable lives.

And within the context of an emergent truce, the million-dollar question remains: If Israel, Hamas, and Egypt eventually accept an international mechanism for the implementation of the agreement, who will implement it? Will it be the United Nations, NATO, the European Union, the Organization for Security and Co-operation in Europe? Will it have a strong legal mandate and executive powers, or will it need to turn a blind eye when things go wrong, as it happened to the monitors from the EU border assistance mission for the Rafah crossing point (EUBAM Rafah) due to the weakness of their mandate?

The international community can discern many lessons from the Agreement on Movement and Access (AMA) and the subsequent Agreed Principle on Rafah Crossing (APRC) of November 2005 in order to design a new mission which could make the ongoing military operation become a “war to end all wars” in Gaza for the years to come. The people of this narrow and overpopulated Strip and its surrounding Israeli communities have really had enough.