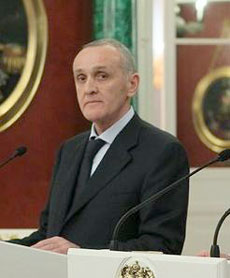 Alexander Ankvab, former president of the disputed nation of Abkhazia, who was forced out by a coup in May 2014 (Wikipedia).

Earlier this month, the president of Abkhazia was forced to flee the capital after thousands of angry protesters seized the presidential administration headquarters and national TV station.

President Alexander Ankvab took refuge in a Russian military base—not the first time an Abkhaz leader has has sought safety in the arms of Russia. The latter is a supportive neighbor that recognizes Abkhazia, a disputed territory in the post-Soviet sphere, as a sovereign state. What is new is that Ankvab needed protection not from traditional Georgian enemies—Georgia still considers Abkhazia as a breakaway region within Georgian borders—but from his fellow Abkhaz citizens.

The events of the last two weeks have dealt multiple blows to Abkhazia’s credibility and governability. Despite its lack of international recognition, successive Abkhazian administrations have in the past managed to oversee competitive elections with peaceful transfers of power.

The coup leaders will, of course, see themselves as redeemers who have saved Abkhazia from the policies of its ousted president. They even got a parliamentary endorsement for the unconstitutional ouster. But they have set a very dangerous precedent. The new elite risk adding a lack of domestic legitimacy to their international pariah status.

Ankvab, for all his faults, was constitutionally elected, and the leaders of this putsch, for all their charms, were decisively beaten in the 2011 electoral contest. Ultimately, three-time presidential candidate Raul Khadjimba and his supporters proved unable to wait just two years, until the next election was due, to test their popularity. It was this same kind of impatience that led to Victor Yanukovych’s ouster in Ukraine, with disastrous consequences. The Abkhaz are perhaps fortunate that the Kremlin has no interest in protecting the ousted president to undermine whatever new regime emerges, as they did in Ukraine.

Alexander Ankvab had long been a divisive figure. He has been the target of no less than six assassination attempts, the last of which left two of his bodyguards dead. Respected rather than loved, he would ultimately be judged for his concrete achievements and did not enjoy a reservoir of popular affection from which he could draw when the going got tough.

During the 2011 presidential election, I interviewed all three candidates and followed them as they stomped from village to village on the campaign trail. Whereas the veteran foreign minister Sergey Shamba and, to a lesser extent, Raul Khadjimba emphasized the virtues of their team, Ankvab projected himself as very much a one-man show. He eschewed rosy projections or extravagant promises and obviously took pride in his simple and straight-talking style. His meetings, during which he reeled off an impressive array of statistics and spoke without interruption for up to two hours, focused on the need for order and the strengthening of state institutions.

Yet Ankvab failed to sufficiently establish a credible mission that might serve as a brand for his presidency, unlike his predecessors. Abkhazia’s first president, Vladislav Ardzinba, was regarded as the founding father of modern Abkhazian statehood. Sergey Bagapsh, perhaps fortuitously, achieved long-sought-after recognition for his state from the Russian Federation, which enabled him to cruise to a comprehensive second-term victory.

Ankvab’s achievements were less clear. In general terms, the demonstrators who seized public buildings were protesting against corruption, incompetence, and the government’s failure to listen to its critics. Two major concrete grievances were articulated. The first accused the government of wasting and/or embezzling Russian aid, while the second admonished Ankvab for permitting the widespread distribution of passports to Georgians in the Gali district. This act, the opposition claimed, undermined Abkhazian statehood and was designed to extend the voter base of the incumbent regime.

The default position of the Georgian government and its Western allies is that very little happens in Abkhazia that does not follow a script devised within the Kremlin walls. Accordingly, there has been a tendency to interpret recent events as those inspired by the needs of its larger neighbor. There have even been suggestions that what we have seen is some kind of Crimean scenario, a prelude to Russia’s annexation of Abkhazia. However, the dynamics for the recent upheaval have been unmistakably local. And whoever emerges as the new president following the early election scheduled for the August 24 will have to face some old challenges.

The first of these is the country’s relations with Russia. While the Kremlin is Abkhazia’s most influential supporter and sponsor, the challenge is to ensure that the Russian embrace does not become suffocating. Many thought that Russian recognition would enhance independence, but for some, reliance on Moscow has served to undermine Abkhazian self-rule. Dealings with Georgia constitute a second persistent issue, but this has very much diminished since the 2008 war. So long as Russia supports the Abkhaz, they have little reason to entertain overtures from Tbilisi. Like a cranky old couple for whom whatever affection existed has long since dissipated, the Georgians and Abkhaz meet under supervision in Geneva to discuss the details of their separation.

A third challenge is establishing Abkhazia’s place in the world. As it stands, the country loiters in legal limbo on the periphery of the international society of states. A new government will most likely continue the daunting task of extending and diversifying its international contacts. In this respect, the tide has been turning against the Abkhaz. When Ankvab came to power, Abkhazia was recognised by six UN member states; the figure now stands at four.

Fourth, there is the situation in the Gali region of southern Abkhazia where ethnic Georgians constitute the overwhelming majority of the population. The (largely Mingrelian) Georgians of Gali are officially tolerated as a necessary blight, but are governed in a semi-colonial fashion. Their predicament looks less secure now. We will learn a lot about the intentions of the new government by how it approaches the people of Gali. The Abkhaz political elite have yet to decide conclusively whether they seek a multi-ethnic democracy or an ethnocracy designed to defend their vulnerable demographic position.

The fifth and most important challenge relates to statebuilding. During the last quarter-century, the Abkhaz have had to deal with the collapse of their economic system, which accompanied the demise of the Soviet Union, and an all-out war with Georgia, which further devastated Abkhazia, followed by a debilitating international embargo. How ironic it would be, then, if, having weathered these destructive storms, it was to be undermined now from within.

For many years, Abkhazia has been denied legitimacy by the international community. The task now for the victorious opposition is to re-establish internal legitimacy for the Abkhaz political system. This will require more than a change of governors, but also in styles of governance.

Dr. Donnacha Ó Beacháin is Director of Research at the School of Law and Government, Dublin City University, Ireland, where he lectures on post-Soviet politics. He is currently based in Georgia.