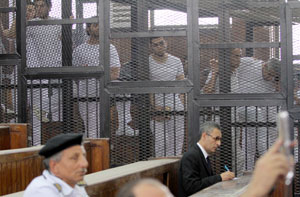 Defendants, including Al-Jazeera journalists, stand inside the court cage as their wait for the court’s ruling on terror charges, June 23, 2014. Amnesty International called the trial a “sham.” (© Mohammed Bendari/ZUMA Press/Corbis)

Abdel Fattah al-Sisi was predictably elected Egypt’s president almost one year after he played a key role in the July 2013 coup that ousted former President Mohammed Morsi. Many Egyptians hoped that Sisi, the former defense minister and supreme commander of the Egyptian Armed Forces, would bring stability to the country, or, at the very least, create the conditions for economic recovery. Yet, as evident in the mass sentencing to death of 529 Egyptians in March and 683 in April without due process, the stability that Sisi appears to have in mind is likely to involve more repression and a continued erosion of many of the democratic gains of the 2011 revolution.

Indeed, as many analysts and journalists have noted, Egypt is now looking ominously reminiscent of the Mubarak years. Even Sisi’s economic plan—“Map of the Future”—lays out a largely state-led development plan that is almost 30 years old and based on practices inherited from the previous regime.

Sisi’s election has further increased the military’s already substantial influence. The military is believed to own nearly 90 percent of the land, and, according to some estimates, the revenues generated by its businesses account for up to 40 percent of Egypt’s GDP. The new constitution, approved in January of this year, preserves the interests and autonomy of the military, and grants the Supreme Council of the Armed Forces final approval of appointments to the position of Minister of Defense, allows for military trials of civilians, and exempts the military budget from full parliamentary scrutiny.

Meanwhile, Egyptians have seen the initial opening of the political space that occurred after the revolution shrink over the past year. The main target of the authorities’ clampdown has been the Muslim Brotherhood and its supporters. The organization has been banned and designated as a terrorist organization, and its key leaders have been arrested. Moreover, thousands of Morsi supporters have been killed and injured over the last year. In retaliation for such actions, counter-attacks against the Egyptian security forces by what seem to be Islamist forces have been carried out, with the risk of more widespread violence looming.

Repressive measures have not just been aimed at stifling Islamist dissent, but have also targeted the non-Islamist opposition. The Ministry of the Interior has reinstated some of the most controversial departments that were disbanded after the fall of Mubarak, including the State Security Investigations Unit and divisions within it that were responsible not only for investigating Islamists but also other opposition groups. While the state of emergency was replaced by a “protest law” in November 2013, the new law forbids gatherings considered a threat to public order, and those of more than ten people without prior police permission. Such restrictions on the freedom of assembly have generated further protests, as well as arrests and overly harsh sentences. Press freedom has also suffered since the coup, including restrictions on filming and media coverage of the trials of members of the Muslim Brotherhood, including that of Morsi.

Sisi’s election will unlikely prevent the acute polarization of society and rise in political violence resulting from these measures. Sisi has already stated that the Muslim Brotherhood will not be able to take part in the parliamentary elections, and any reconciliation between the organization and state authorities will likely not happen for some time. However, opposition to the new authorities will not be limited to the Muslim Brotherhood and other Islamists; it will also include pro-democracy forces. Which political forces fill the gap created by suppression of the Muslim Brotherhood will be critical to the political transition in the near future. Currently, Sisi lacks a solid party support base.

Sisi does have the support of the business elite, who appear to be backing him in the hope that he will bring stability to the country and prove more favorable to their interests than Morsi. However, the road ahead will be paved with difficulties. The structural reforms needed to improve the long-term health of the Egyptian economy are likely to meet with considerable opposition from the military, due to its deeply entrenched economic interests. Sisi may attempt to co-opt the military by militarizing the state in order to reduce opposition to reforms, as Mubarak did, but this may further reduce his room for maneuver.

For the time being, generous foreign assistance from several Gulf states has enabled structural economic reforms to be postponed. Following the removal of Morsi, the International Monetary Fund suspended negotiations with Egypt on a potential loan, prompting Egypt to turn instead to the Gulf, particularly Saudi Arabia and the United Arab Emirates. Both these states share the governing authorities’ interest in curbing the Muslim Brotherhood and are willing to pour considerable funds into Egypt to support Sisi and the army. However, they, too, will want to see their aid well spent. The downfall could be in Sisi’s failure to develop a coherent economic strategy and to succeed in implementing it.

Dr. Lisa Watanabe is Senior Researcher at the Center for Security Studies (CSS) at ETH Zurich. She is the author of “Sinking in Shifting Sands: The EU in North Africa,” in Strategic Trends 2014: Key Developments in Global Affairs, edited by Oliver Thränert and Martin Zapfe (Zurich: Center for Security Studies, ETHZ); and co-author of Critical Turning Points in the Middle East, 1915–2015 (Palgrave Macmillan 2011).