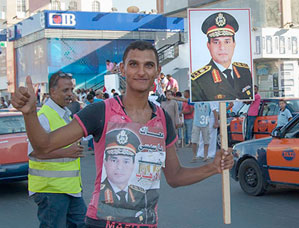 Nothing seems certain about Egypt’s transition today with the exception that, following the elections on May 26-27, its next president is going to be Field Marshal Abdel Fattah al-Sisi. In less than a year, the former army chief won the hearts of millions following his widely supported ousting of President Mohamed Morsi. That sole political gesture endowed him with enough legitimacy to convince the majority of Egyptians that he was the country’s best candidate to take charge at this turbulent time.

For Sisi’s only opponent in the poll—longtime leftist Hamdeen Sabahi who came third in the previous presidential election—contesting the election will prove laborious and ultimately futile. The appetite for stability and security, which so many Egyptians believe Sisi can provide, appears to preclude any possibility of an alternative outcome to the latter’s victory. A personality cult has flourished around him; his image on the Egyptian street has become ubiquitous; and, in record time, he has been rendered the greatest hero Egypt has known since Gamal Abdel Nasser, the Arab world’s demagogue par excellence.

Regardless, the trouble with Egypt today goes beyond one man and his abilities, however extraordinary they might be. The state has become increasingly ungovernable. The structural challenges posed by the stagnant economy and precarious security situation present a seemingly Sisyphean task, and any next president will have that boulder to roll up the hill.

On the economic front, the depth of the Egyptian malaise “cannot be solved overnight,” as  Sisi himself has pointed out. While fuel shortages are felt widely at the household level, fuel subsidies are hindering real economic growth. The national debt—at over $260 billion—has already surpassed the country’s GDP and the budget deficit is nearly $35 billion. At the same time, Sisi will need to stand out from his predecessors by offering some quick fixes to curb high unemployment, which stands at 13%, and unchecked inflation, at 11%.

The country’s precarious security situation has been exacerbated by the crackdown on the Muslim Brotherhood and its supporters, resulting in a spike of terrorist activities throughout the country. In a recent interview, Sisi declared that, under his presidency, the Muslim Brotherhood would cease to exist. As the fight against Islamism continues to be waged as a fight against terrorism, this approach to security is also likely to adversely affect the economy, in the short term at least, particularly when it comes to tourism and foreign direct investment.

Indeed, the nexus between the security situation and the economy needs to be better grasped: in Egypt, the former very much affects the latter. This is best understood in the tourist industry. Tourism receipts decreased by more than half between 2010 and 2013 (from $12.5 billion to 5.8 billion)—a testament to the frequent episodes of violence since the initial uprising broke out which discouraged foreign visitors. Given that 2.9 million people (or 11.5% of the country’s workforce) rely on the tourism industry, this blow is deeply felt.

Yet, on top of the structural barriers of security and economy, Egypt’s potential for progress is cursed with what may be an even greater impediment that threatens to bring that boulder further back down the hill. An overly impatient public—particularly among Sisi’s own support base, which is at times unhelpfully enthusiastic—and a capricious media apparatus have high expectations that no single leader is likely to meet. Meanwhile, the hawkish military establishment stands ready to turn against a previously popular general if cracks begin to show.

Managing expectations will therefore be Sisi’s overarching challenge, and it’s not clear how his mythical stature will help him to do this in practice. Large swathes of the Egyptian population have turned against each individual that has jumped into the political driver’s seat since Mubarak was ousted in February 2011. The popular mood is erratic, and unpredictability is the status quo.

To take any country out of a cycle of revolutionary politics and into stability, seems, according to history, the larger Sisyphean task. Savvy leadership and a deep shift in the popular mindset could prevent the boulder from rolling back on Egypt’s transition for good, yet neither element appears likely to emerge before this election.

Omar El Okdah is a policy analyst in the Middle East program at the International Peace Institute.