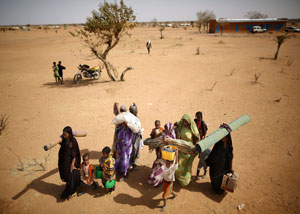 Malian refugees, carrying their belongings, approach UNHCR vehicles that will drive them to a camp in Burkina Faso, March 12, 2013. (UNHCR/B. Sokol)

Conflicts in Syria, the Central African Republic, and South Sudan are having a “horrific” impact on civilians, and the number of refugees and people displaced by conflict around the world has been steadily increasing over the last three years, according to Dr. Volker Türk, Director of the International Protection Office at the United Nations High Commission for Refugees (UNHCR).

Dr. Türk spoke to IPI Research Fellow Jérémie Labbé about the challenges humanitarian actors face in providing relief for those displaced by conflict as well as protecting them in crisis contexts and in the host countries that receive them. He said that three of the worst conflicts today bear commonalities in terms of their appalling impact on civilians, the way that they drive displacement, and the form that this displacement takes—with refugees and displaced persons frequently relocating multiple times.

Given the millions displaced due to the Syrian conflict, Dr. Türk emphasized the need for increased international support to Syria’s neighbors who are hosting large numbers of refugees. He also stressed the need for creative solutions to the challenge of protracted displacement, which now averages 17 years. What follows is a condensed and edited version of the conversation.

Can you first bring us up to date on the state of forced displacement worldwide?

Well, the last couple of years have seen a massive increase in both internal and external displacement, mostly as a result of conflict and violence. The Internal Displacement Monitoring Center has just reported that over 33 million people [are] internally displaced as a result of conflict. We haven’t yet been able to issue our statistics, but the number will certainly be very high in terms of refugees—I think we will be looking at at least 11 million. Obviously, the Syrian conflict is the one that produces most of the refugees these days. We already have 2.7 million Syrian refugees in the neighboring countries.

Is there growth in the number of refugees or displaced people? And if yes, will this tendency remain in the years to come?

Over the last three years, we have seen a steady increase [in both], and it is clearly due to the fact that we have seen a number of conflicts emerge. If you look back, we had Côte d’Ivoire, Mali, Somalia; we then had Libya, with the influx into Egypt as well as Tunisia; [then there was] Syria and Yemen; now, South Sudan and the Central African Republic. But the older conflicts like Afghanistan, Iraq, Somalia, Myanmar plus Colombia are not yet resolved.

So you have a combination of factors—new and old conflicts—producing or continuing to produce refugees, while old crises are not being resolved, which makes it extremely difficult in terms of numbers. In fact, that’s the reason behind the growing numbers of refugees and internally displaced [people] as a result of violence.

Most people are aware of UNHCR’s role in providing emergency relief assistance in humanitarian crises. But the protection role of your institution is arguably less well known. What is UNHCR doing to ensure the protection of refugees and displaced people?

UNHCR’s international protection role goes back to its foundation in 1951, and it’s actually the core of our existence, if you like. For instance, it means that we go in front of courts to provide what we call an amicus curiae brief; we go into detention centers and have access to refugees and asylum seekers; we advise governments on laws. We actively resettle people; we register them; we document them. So there is a whole range of protection activities that we conduct—also in relation to responding to sexual- and gender-based violence, child protection activities, and activities for people with special needs. There is a broad range of activities that we are undertaking for refugees, for stateless people, as well as for the internally displaced.

If you like, that’s our signature dish: it’s the protection culture, the type of protection activities that we conduct, but also to ensure that the relief response is informed by protection considerations. It means, for instance, that camp layout needs to be looked at from a protection perspective, because if you are not careful about the camp layout, you may inadvertently contribute to instances of gender discrimination or things like that.

You recently visited Syria, the Central African Republic, and South Sudan—the most troubled hotspots on the planet today. What do these crises have in common in terms of protection response?

I think these crises have essentially three things in common. First, they have an incredibly horrific impact on civilians. The number of deaths of civilians is extremely high.

There is an estimate for the Syrian crisis that ranges [from] 100,000 to 150,000. The same for South Sudan—a very high toll of civilians that die. The same for the Central African Republic. So civilians bear the brunt of these violent conflicts.

The third thing is that, when we look at the causes of the conflicts and displacement, we are talking about persecution on account of religion, political opinion, sometimes ethnicity; serious, systematic human rights violations; and fundamental disregard for international humanitarian law, which is the essence of refugee protection. So, if someone flees circumstances of this kind, obviously the person squarely fulfills the criteria of the refugee convention definition, and I think it’s important to recognize this.

In the Central African Republic, UNHCR along with other actors recently helped to relocate some Muslim communities that were directly threatened by hostile groups to other parts of the country, triggering criticisms in some quarters that it is facilitating ethnic cleansing and de facto partition of the country. What is your take on this dilemma?

The relocation of communities at risk was and continues to be a life-saving measure of last resort. If we are confronted with a situation where the only choice for people to save their lives is to be relocated elsewhere—because it’s what they want, and because there is no sustainable security presence that can be provided by other actors and in the absence of the state—then we do not have much choice but to help people to relocate. Otherwise, they would be massacred. So, for us, the humanitarian imperative to save lives prevails over any other imperative.

Moving to Syria: nearly 10 million people may be displaced, including close to three million in neighboring countries. The neighboring countries have shown enormous amount of generosity but are under increasing strain. What is your feeling about the need for solidarity and burden-sharing by the international community?

The strain and the burden that the neighboring countries face as a result of the refugee crisis are enormous. Just think of Lebanon. Lebanon is a country of 4.5 million inhabitants. You have suddenly an additional 1 million people in a country that is already suffering from lack of resources, where the infrastructure is not necessarily equipped to deal with an additional influx of a million people. I mean, one in every four people is a refugee. That is enormous for a country to cope with. The same goes for Jordan, Turkey, Northern Iraq, and Egypt.

It’s clear that these countries require international support to be able to continue hosting refugees under these circumstances. There is a necessary humanitarian response, and we are obviously providing that. But there’s also the longer-term response required, which would help these countries on the development side and on the infrastructural side—to make sure that their education systems, health systems, water management systems, and even waste management systems are equipped to deal with massive new populations.

And I’m afraid that, there, we still need a lot of work on the part of the international community. We have very good cooperation with the World Bank, with UNDP, but we need more engagement of donors to ensure that that response is also forthcoming on the development side.

Do you feel that resettlement in third countries, particularly in European countries, maybe in North America, is an option that should be further looked into?

Absolutely. Resettlement and humanitarian admission is an important sign of solidarity with the host countries. Our aim is to resettle about 30,000 Syrian refugees in the course of this year. We hope that over the next two years, that is 2015–2016, we will be able to see about 100,000 people resettled in third countries.

Of course, these are small numbers in comparison. But nonetheless, if the most vulnerable refugees benefit from such programs, they obviously have a better future. And it’s also an important sign of solidarity with the host countries to engage in resettlement and humanitarian admission.

Internally displaced people spend an average 17 years in a situation of displacement. Besides resettlement in the case of Syrian refugees, what are other durable solutions to address protracted displacement?

Protracted displacement is one of the big challenges. We need collectively to work more creatively on solutions, especially in those situations where prolonged displacement has occurred for over five years.

Some of the solutions lie in finding ways to locally settle people where they are, because if people have been in exile for over 10, 15, 17 years, it will be very difficult for them to go back under certain circumstances, especially if the conflict continues.

But sometimes this requires political decisions by governments to accept people. We have very good experience, especially in the industrialized world, where if you are recognized as a refugee, you basically end up living there for the rest of your life. In some of the developing world, it is more of an issue.

But there have also been some innovative approaches—through labor migration schemes, in some instances, or by, in effect, tolerating the presence of refugees and letting them get on with their lives where they are. These types of approaches will need to be reinvigorated. There needs to be a real push towards solutions, and some of it can be done by us. A lot of it will have to be done by other actors, including by political actors, to find the political will for a stronger solutions orientation towards displaced communities.