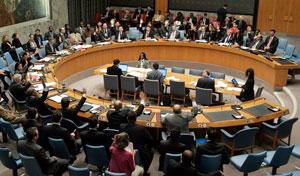 The Security Council  adopts a resolution related to sanctions against the Democratic Republic of the Congo, November 30, 2009. (UN Photo/Devra Berkowitz)

Over the last two decades, the key policy question surrounding multilateral sanctions has been effectiveness. Because of studies that suggest that sanctions are effective only about one-third of the time, there has been a concerted effort to develop so-called “smart sanctions,” which increase the effectiveness of Security Council sanctions at the front end by targeting specific groups, individuals, and entities. See, for example, reports here and here that detail the shift away from comprehensive sanctions towards targeted sanctions on the basis of effectiveness.

The emphasis on targeting at the front end, however, has overshadowed an important back-end question that is equally important to effectiveness: termination. This policy lacuna is significant because, once imposed, sanctions tend to stick. Indeed, my research shows that Security Council sanctions tend to last considerably longer than sanctions imposed by regional organizations, and that shorter sanctions episodes are often more effective. In other words, sanctions of long duration may detract from their effectiveness.

Since the end of the Cold War, sanctions have emerged as one of the Security Council’s primary tools for conflict management. Over this period, the objectives of Security Council sanctions have become increasingly ambitious. Although the measures of targeted sanctions are today quite standard, and usually include an arms embargo, asset freeze, and commodity sanctions, the objectives to which those measures are applied can be wide ranging. For example, the objectives of ongoing sanctions today include ending recruitment and targeting of women and children in conflict situations; the protection of civilians; the observance of human rights and international humanitarian law; and longer-term reform of national institutions such as the police, the security sector, and the justice system.

This new generation of sanctions, with their broad goals and transformative objectives, requires new thinking about termination policies. At present, the termination of sanctions is approached in one of three ways: a defined sunset clause, a commitment to review, or an indefinite term. There is no standard policy with regard to which model is used when, although the pattern that has emerged is that sunset clauses of 12–18 months are used in conflict management situations, whereas indefinite sanctions are more likely to be applied where the focus is international security, terrorism, and non-proliferation.

The choice between time-bound or indefinite sanctions is a political one. In 2004, David Cortright and George Lopez reported that time limits were a divisive issue for the Chowdhury working group (an informal working group on Security Council reform), finding that some nations vigorously opposed them, while others wanted to maintain indefinite pressure on recalcitrant regimes.

Clear termination policies are relevant to sanctions’ effectiveness for two reasons. First, targeted sanctions that contain clear objectives can shorten conflict cycles. Because sanctions work best as a means of persuasion and not punishment, a powerful inducement is to provide incentives for compliance with criteria for lifting sanctions. Clear termination policies aid in this goal. Second, shorter sanctions should be encouraged. The incentive to comply will be strongest when narrow, and decisive, sanctions are imposed and carefully managed, in comparison to measures that languish without effecting a change in behavior.

In Sudan, for example, there is a general consensus that the sanctions imposed under Resolution 1591 in 2005 have stalled. There have been no new listings since 2006; no consensus on harmonizing the existing sanctions with a parallel ICC investigation; and little evidence that the sanctions have aided the victims of the ongoing conflict. It is time to consider a sunset clause: wind down these sanctions that are widely viewed as ineffective, and turn to a different method of diplomacy, coercion, conflict management, or even a new and refined set of sanctions.

A related issue is the duration of particular measures under an existing sanctions regime. Refocusing sanctions to better manage the timeline of particular measures would improve effectiveness. For example, does the ongoing arms embargo against al-Qaeda make sense when the real threat appears to be coming from regional spin-off groups? In comparison, efforts to impose narrowly targeted sanctions against al-Shabaab in the Somalia/Eritrea regime or Yemeni al-Qaeda affiliates under the Yemen sanctions are a step in the right direction.

The availability of an internal review process, such as the UN Ombudsperson’s Office, which has the power to consider de-listing requests from those under the al-Qaeda regime, will be relevant to which termination policy is chosen. Although I argue that the default should be short and managed sanctions cycles with defined sunset clauses, an ongoing review process where individuals and entities can bring de-listing claims and are afforded due process protections could justify open-ended sanctions or sanctions subject to review.

Criteria for the termination of sanctions regimes are as essential to the effectiveness of sanctions as intelligent sanctions design. While it is recognized that better targeting may help to shorten conflict phases, the relationship between well defined goals, incentives to encourage compliance, and terminating sanctions regimes has been overlooked. When the objectives of a sanctions regime are met, the sanctions should be amended, repealed, or terminated as soon as possible. This can be achieved through a renewed debate over the policies on sanctions termination and the start of a new dialogue about the best practices of termination.

Kristen E. Boon is a Visiting Senior Advisor at the International Peace Institute and Professor of Law at Seton Hall Law School. She is the author of the recent IPI report, Terminating Security Council Sanctions.