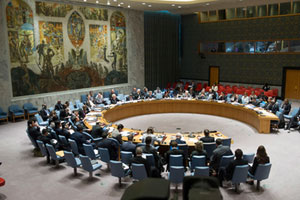 In the sixty years since Franklin D. Roosevelt jotted down his idea for the United Nations at a birthday dinner for Winston Churchill—with his notation “4 Police” becoming the five veto powers now at its center—the Security Council has come to act not only as a body policing global order, but also as a quasi-judicial enforcer of international law. As the great student of the Security Council Thomas M. Franck explained in 2002, the Council’s legal deliberations are not quite like those of a “judge” rigidly and objectively enforcing the law without consideration of her own interests and concerns, but rather more like those of “a global jury”: a group of sovereign countries appointed to assess the conduct of one of their peers, “not without feelings and biases, but whose first concern is to do the right thing by the norms under which we all live.”1

Yet something has changed in the ten years since Tom Franck made that assessment. Over that time, the state members of the Security Council have been drawn into dealing with a wide variety of non-state criminal activities, including drug trafficking, diamond, mineral and wildlife trafficking, and also piracy. And in doing so, they have increasingly resorted to tools that resemble those found in domestic criminal justice systems—criminal investigation, trial, and punitive sanctions.

In a new United Nations University working paper, I review the Council’s practice in this area, and explore how the Council’s experimentation with criminal justice discourse is shaping its repertoire—and possibly complicating its ongoing pursuit of public legitimacy.

The Emergence of Criminal Justice Practice

The Security Council’s experimentation with the use of criminal investigation, trial, and punitive sanctions can be found—as so much else in the Council’s current repertoire—in the early 1990s, with the action against Saddam Hussein that the United States promoted as a “police” action to enforce the “rule of law.”2 In Resolution 687 (1991), the Council for the first time established a judicial body (to compensate civil damage claims), a move that Rosalyn Higgins, later president of the International Court of Justice, described as “very, very different from anything we have expected of the Security Council before.”3

The Council soon went further, using its Chapter VII powers to forge criminal justice-based responses to terrorist incidents in Libya, Ethiopia, and East Africa, and to atrocities in the Balkans, Rwanda, Sierra Leone, Cambodia, and East Timor. At the same time, Chapter VII sanctions regimes evolved away from trade embargoes to targeted exclusions of individuals and entities from participation in international society, taking on the characteristics of the security control orders used in some domestic criminal justice systems.

The 1990s turn towards enforcement actions drawn from domestic criminal justice systems might be thought, therefore, to have set the Council up well to deal with non-state criminal activity. A recent IPI survey suggests that almost three quarters of current UN peace operations operate in environments significantly affected by organized crime. Of these, roughly half have mandates that pertain in any way to dealing with criminal activity, usually through support to host state police institutions, small arms control, or protection of civilians.

Few UN missions are, however, directly mandated to tackle criminal groups. The working paper considers why, and suggests that this is the result of three major obstacles that the Security Council has encountered in its experiments in international law enforcement.

Sovereignty
The privilege of legally defining conduct as “criminal” and enforcing the resulting criminal law is at the heart of state sovereignty. The prior treatment of the conduct in question—whether there was already consensus that it was “criminal,” or whether the Council is making new law—is thus a central consideration. The Council has faced stiff resistance from some quarters when it has sought to tell states how to use their criminal justice powers.  The working paper finds that the Council has faced less resistance to tackling criminal activity where sovereignty is weakest: on the high seas (e.g., piracy); in countries where the government has lost effective control over parts of its territory (e.g.,  Somalia); and in small countries of limited strategic interest to the great powers (e.g., Guinea-Bissau).

Resources
A second obstacle is posed by limited access to law enforcement and judicial resources. Criminal violence flourishes where state capacity is weak. So in tackling such violence, the Security Council has had to look beyond the host state for the resources to enforce its decisions. These have not always proven easy to identify. States are reluctant to send their police abroad, and even when they have chosen to do so, police forces are traditionally not—unlike military forces—set up for foreign deployment.  Transnational criminal networks are. So the Council’s law enforcement forays have at times found themselves outgunned. The Council has found several different ways to access additional enforcement capacity: through decentralized action by member states; through collective enforcement (for example relating to piracy); and through a more regulatory approach, mandating “due diligence” by private companies in doing business with specific actors (e.g. in DRC and Eritrea).

Due Process
The third obstacle the Council has encountered in its experiments in international law enforcement is due process. As Thomas Franck recognized, the members of the Council are not “bound by the precise scruples underpinning the objectivity of judges”—or even modern criminal trial juries.4 Yet the growing reliance on criminal justice discourse has increased international society’s expectations that the Council’s decision-making will meet modern expectations of criminal justice practice.

As the working paper explores, the steps taken by states acting under Council Chapter VII authorization to police criminal activity—from terrorism to piracy—is increasingly being tested by state and regional courts against international due process, fair trial and human rights standards. In some cases, such as the international response to piracy off Somalia, this has posed a major obstacle to the development of an effective, rights-respecting law enforcement response to a significant criminal activity.

The Security Council has moved furthest, fastest, when the criminal activity in question threatened P5 interests, the country was already on the Council’s agenda, and no state with influence in the Council had a particular reason to limit such experimentation. The cases that have exhibited these traits so far have been drug trafficking in Afghanistan and Guinea-Bissau, piracy off the coast of Somalia, mineral trafficking from DRC and Eritrea—and, most recently, wildlife trafficking in central Africa.

The sovereignty and resource obstacles have been particular drivers of Council experimentation and innovation. The limited willingness or capacity of states to deliver effective international law enforcement resources has forced the Council to look for alternative solutions, including creating international criminal justice mechanisms and, increasingly, encouraging the involvement of private sector actors. The “regulatory” approach that may be emerging, using outside expertise to help develop norms to be enforced following Council endorsement, offers an important supplement to the Council’s repertoire, but also raises a series of questions around participation and voice in the development of these norms.

The Council also continues to struggle with integrating this “law enforcement” approach with a conflict management approach. This is a result of the “due process” obstacle thrown up by attempting to import criminal justice techniques from the domestic to the international plane. The use of criminal justice discourse and techniques has created expectations that those treated as outlaws will be brought to justice; yet the Council ultimately prefers, in some cases such as Afghanistan and Guinea-Bissau, to treat these actors not as targets for law enforcement, but partners for peace. However politically wise, this risks creating perceptions of unequal treatment before the law among those whose expectations of justice have been stoked by Council rhetoric.

The simple reality is that the Security Council is a political body—not a forum for justice. It does not treat ostensibly like cases alike, precisely because the interests of Council members may differ significantly between such apparently similar cases. No judge in a domestic criminal justice system could properly factor their own interests into how they handle a case. No Security Council member can properly ignore such considerations. The danger for the Council is that, over time, an over-reliance on criminal justice discourse may create a dangerous gap between its practice and public expectations of the Council as an enforcer of the international rule of law. An adjustment of rhetoric—and possibly also of practice—may be in order.