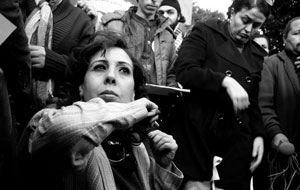 A woman in Cairo cuts her hair as part of a protest against the lack of women’s rights in an early version of the constitution. The action was a reference to the daughter of Pharaoh Akhenaten, who cut her hair in grief. (December 25, 2012-Moud Barthez/Flickr)

March 16th was Egyptian Women’s Day, and while Egypt’s 2012 constitution was labeled by experts as “hostile against women,” the revised constitution—adopted January 18, 2014—raised hopes that it not only had passed the bare minimal constitutional guarantees for women rights, but also opened the door to creating new possibilities. However, two months after its adoption, this assumption is failing to stand the test of practice. The gap between the articles of the constitution and reality persists.

In theory, the constitution—which was ratified by a sweeping 98% majority—is a leap forward in providing a “highest-order system” (to quote political philosopher John Rawls) when it comes to clauses guaranteeing equal citizenship for Egyptian women, in particular Articles 6, 11, 19, 93, and 180. It is worth noting that, while 50% of registered voters headed to polling stations in the 2012 referendum, just over 38% took part in the poll in January. However, in both 2014 and 2012, long queues of women voters were the highlight of the process, with women representing 48% of the voting bloc.

Article 11 of the new constitution stipulates that:

“the state shall guarantee the achievement of equality between women and men in all their civil and political rights and their economic, social and cultural rights, in accordance with the provisions of the Constitution. The state shall take measures that ensure women are properly represented in representative assemblies, as prescribed by law, and shall guarantee women the right to hold public office and the highest administrative roles in the country, as well as their appointment to judicial bodies and authorities, without discrimination.”

However, a few days after the adoption of the constitution, Egypt’s State Council refused to accept applications from female graduates for jobs available in the Council because they were women. Mervat al-Tellawy, Head of the National Council for Women, mentioned that the Council claimed that the jobs it offered are “for men only,” which would violate the constitution’s promotion of gender equality for judicial jobs.

The State Council, on the other hand, argued that no decision has been taken by the General Assembly of the Council to accept applications from women, stressing that this matter will be dealt with independently through internal decisions by the Council. In 2010, the State Council voted overwhelmingly to ban female law graduates from joining their ranks; however, in 2010, we didn’t have Article 11 in the constitution. This incident casts doubt over whether or not Egyptian women are actually emerging from the traditional conservative shadows that they fought against under the Muslim Brotherhood rule. The battle continues though; Shaimaa Adel, a 2013 female top graduate of the Faculty of Law, Menoufia University, filed a lawsuit through the Administrative Court on January 26 against the president, minister of justice, and the head of the State Council because of her denied application at the State Council.

Questions also remain as to whether or not women will have their fair share of the Parliament seats. Women’s rights defenders in the constitution writing committee pushed for including a quota of Parliament seats for women. They failed to obtain that, and yet succeeded in securing a quarter of seats in the local councils for women (Article 180), which is unprecedented.

Yet, how many women will actually run for elections, whether parliamentary or municipal? Will the so-called “liberal bloc” push women to the frontlines of their elections battles? Will they press for adopting an electoral law with a system of closed party lists, which will result in guaranteeing a more fair representation for women? Or will they yield to a single district system—with all its defects—that is currently being marketed as the guarantee against the return of Muslim Brotherhood?

The future Parliament will have a major role to play if that gap between the constitution as the supreme system and the new set of rules is to be narrowed. It remains to be seen whether the new Parliament will—or will not—close the gap between theory and practice with regard to Article 93, which says that “the state shall be committed to the international Conventions, Covenants and Charters on human rights ratified by Egypt which shall become law after publication, in accordance with the promulgation process.” Let alone the two reservations Egypt still places on CEDAW—it needs serious commitment to modify current legislations in accordance with international obligations regarding women rights.

Egyptian women swing between hope and despair. The internal elections of the Dostour party in which two women politicians competed brought a lot of hope. The runner-up, Gameela Ismail, and the winner, Hala Shukrallah, are two examples of women who are fighting for change. This shows that, despite all the setbacks and no matter how slowly, change is actually happening.

At the same time, the gap between the articles of the new constitution and the everyday reality in Egypt is a growing source of despair. At the moment, 3 million Egyptian women do not have a national identity card. To the state, they are non-existent citizens, never mind their equal citizenship rights. At the moment, hundreds of Egyptian women are under detention either with no accusation or with a twisted accusation that in fact is part and parcel of the freedom of expression domain supposedly guaranteed by the constitution. A constitution is supposed to protect all citizens equally, and guarantee that not a single citizen is terrorized by the state. In this, Egypt and Egyptian women still have a long way to walk.

Hanan Elbadawi is a researcher and writer who works as a consultant with the International Peace Institute on the Arab Forum on Citizenship in Transition project.