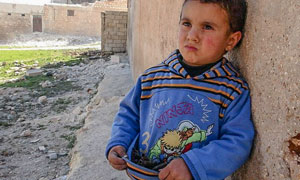 A young boy in Idibi, Syria, with a shirt pouch of bullet casings collected after heavy shelling by government forces, March 24, 2012. (Freedom House)

Children in war zones are subjected to killing, maiming, torture, recruitment into armed forces, sexual violence, and forced displacement: there is no need to emphasize the horrific impact of armed conflict on children in today’s conflict zones. It is worrying, then, that there are certain states, including Azerbaijan, China, Colombia, India, Pakistan, and Russia, that would like to see the issue of children and armed conflict given less attention as a priority thematic issue in the UN Security Council.

In 2012, UN Security Council Resolution 2068 became the first Security Council resolution on children and armed conflict to be passed with abstentions (from Azerbaijan, China, Pakistan, and Russia) rather than unanimously. States that have sought to push back the children and armed conflict agenda have argued that the special representative has interpreted the issue too broadly, were concerned about the human rights dimension in the Security Council thematic issues more broadly, and argued that the selectivity of areas of focus and countries represented in thematic issues are the result of discrimination and double standards in the Security Council.

In July 2013, the United States refused to hold the annual debate on children and armed conflict during its presidency of the Security Council, reflecting the overall difficulty of negotiating decisions on this thematic issue in the current political environment. These trends were highlighted in a recent report by the Security Council Report, which argues that the implementation of the Council’s children and armed conflict agenda, including increased state accountability, is at stake.

This pushback is concerning for two reasons. First, the concerted efforts to move the children and armed conflict agenda forward in the past have produced important mechanisms for accountability, monitoring and reporting, and sanctioning states that have helped to reverse the trend in the recruitment and use of child soldiers by both state and non-state armed groups. De-emphasizing children and armed conflict, which now sits as a priority issue on the Council’s agenda, may cause significant progress in this area to lose traction at a time when children continue to feature significantly in major armed conflicts around the world, including the Central African Republic, the Democratic Republic of the Congo, South Sudan, and Syria.

Second, this trend suggests that there are limitations on international understandings of the extent to which children’s presence in contemporary armed conflicts is constitutive of the nature and conduct of war. While country-specific resolutions on children and armed conflict provide important tailored and specific responses to select conflicts that reach Security Council deliberations, children and armed conflict as a thematic issue in the Security Council ensures that children’s experiences, needs, and interests must be identified across all conflicts. When pitted in competition for political attention with other thematic issues, such as women, peace, and security, narrow framings of these thematic issues do not align with the social realities of armed conflict—in which the contributions, needs, and experiences of children, women (often girls), and other populations of concern are not so clearly segregated.

This is an incredibly important approach. Yet this singular framing of children and armed conflict tends to detract from a more complex understanding of children as crucial to the strategy, methods, and nature of violence that characterize contemporary armed conflicts—an understanding that is needed to fulfill this protection agenda. Paying closer attention to children in armed conflict is not only a human rights imperative; it is of strategic significance for interpreting and responding to the challenges of peace and conflict in today’s international security environment. A radical reconceptualization of children and armed conflict may therefore serve to reinforce its significance for the Security Council’s central mandate for maintaining international peace and security.

The Impact of Children on Conflict

The current conflict in Syria provides an illustration of why some of the stagnant notions about conflict’s impact on children no longer apply, and why children also need to be seen as impacting the process of conflict. The UN secretary-general’s report on children and armed conflict in Syria released in January illustrates the multiple ways that children are present in the ongoing conflict between the government and rebel forces.

First, the event that catalyzed the popular protests in Syria in 2011 was the torture of children accused of painting anti-government graffiti in public spaces in Dar’a. The determinedly political acts of these children and their torture by government forces sparked political protests that spread throughout the country, leading to a crackdown by the Assad regime against civilian protestors and the escalation of anti-government insurgent fighting that strengthened itself in a united coalition known as the Syrian National Council in October 2011. Let’s forget the first assumption about children as victims; they are not always apolitical actors.

Second, with much of the battlefield in Syria located in urban spaces, children are often caught in the crossfire and have been persistently killed and maimed throughout the duration of the conflict. However, the purposeful attack by the government’s militia on the civilian population is in itself a military tactic, defining the character of violence that is being committed throughout this civil war: terrorizing civilian populations serves a political purpose and is a means to an end.

Third, the report states that children have been detained and tortured in detention centers (schools converted into both holding centers and sniper bases) to extract information on/from parents and relatives. Children are therefore sources of intelligence that feed into the targeted killings and tactics that have sustained the violence. Children’s experiences during war also make them a source of knowledge that is indispensable for the study of armed conflict—reports by influential human rights groups have used testimonies, images, and media reports of children affected by conflict to drive advocacy campaigns and demand protection for civilians inside Syria. There is something politically compelling about suffering children in warzones that mobilizes action.

Finally, the secretary-general’s report shows that children have been fighting in combat and support roles for both government and rebel militias. Children are part of the economics of today’s armed conflicts: they are a cheap, reliable, and easily accessible resource for logistics and fighting. Without them, the longevity of conflicts would be undermined, and so children’s presence in armed conflict must be understood as contributing to the economic sustainability of war, as well as physically contributing to ground warfare.

The case of Syria is one high-profile conflict that illustrates quite clearly the way that children are impacted by armed conflict and the way their presence shapes the contemporary battlefield in a dynamic way. We know that children form a demographic bulk in armed conflicts around the world, so it is fair to assume that children are vital sources of knowledge of the workings of conflict. Furthermore, they are significant stakeholders in the outcomes of peace-process and post-conflict justice mechanisms. Research consistently shows that addressing the psycho-social needs of children and youth in conflict-affected areas is crucial for the sustainability of post-conflict peace, and for the prevention of increased participation of youth in ongoing conflicts where their manpower is crucial for success. The international community, however, has a poor track record of including children’s experiences and interests in post-conflict accords and transitional justice mechanisms.

It is clear then that the Security Council’s work on children and armed conflict has barely begun; this is not the time for states in the council to start stalling on international commitments on this key priority agenda.

Dr. Cecilia Jacob is a lecturer in the School of International Political and Strategic Studies at the Australian National University. She is the author of the book Child Security in Asia: the impact of armed conflict in Cambodia and Myanmar.